Name the thing a thing: community-based solutions to education inequity 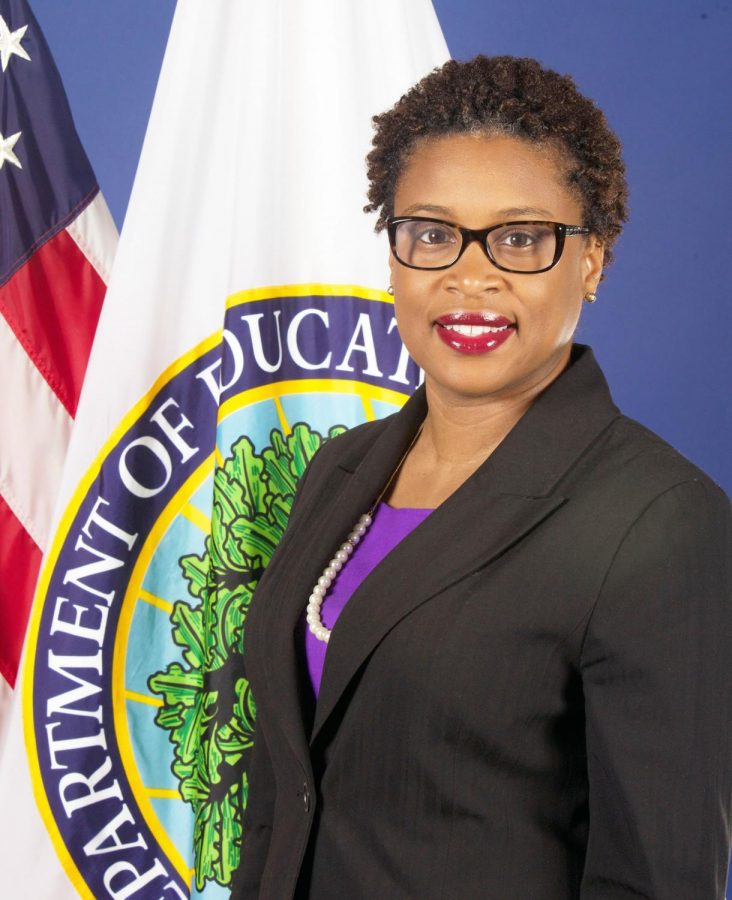 The second lecture in the Law and Policy Program as part of this month’s series of education policy seminars highlighted student inequity and the role of language and communities in finding solutions.

Khalilah Harris, managing director for K-12 Education Policy at the Center for American Progress presented “Ending the EduWars: Developing Community-Informed Policy to Expand Opportunity for America’s Youth” on Monday, April 8, at 7 p.m. in the Patricia Bush Tippie Alumni Center. The event was hosted by the Law and Policy Program as part of this month’s series of education policy seminars.

Harris’s lecture focused on EduWars — debates on various education policies — specifically those which affect students of color. She began by quoting the Topeka case from the Brown v. Board decisions from the 1950s.

“‘Segregation with the sanction of law … has a tendency to retard the educational and mental development of negro children, and to deprive them of some of the benefits they would receive in a racially integrated school system.’ Does this sound like a seminal, educational decision that supports black students and their brilliance?” Harris asked the audience.

This exemplary definition of what was happening to black children, according to Harris, implies black children who can’t sit next to white children feel inferior, and this is why they felt as though they could not achieve.

“It’s interesting that many people haven’t actually read the Brown decision,” Harris said. “They say things like ‘Brown ended segregation in schools. Brown is what we should look towards to make sure we are ensuring all students have access to opportunity.’ May 17th is the 65th anniversary of the Brown decision, and people are still trying to chase equity based on this case.”

The lecture was discussion-based and Harris presented several different education policy issue terms on the board to engage the audience. The first term was integration, and she asked the audience to define it.

Nicolas Bulgarides, ’19, a communication arts major and education studies and writing minor, said “combining groups so that there is cohesion and harmony to improve education and help students develop empathy and social skills.”

A few of the Brown cases, Harris pointed out, were seeking resources such as transportation, not integration.

“They were fighting for access to resources,” Harris said. “Integration, in the case of a school district that is 90 percent non-white, is a nefarious concept. How do you say that a school district is segregated if there aren’t children of multiple races who can go to the schools? So, the question becomes, what is the goal of integration?”

“This, my friends, is the crux of the education wars,” Harris said. “People have polarizing differences about single concepts, and, often times, we don’t get to the nuance about what that means for students.”

Charter schools siphon money from public schools, Harris argued, and students who attend charter middle schools do no better in college than those who do not. She said that charter schools also sometimes adopt a “no-excuses” conformity policy where students must behave accordingly to behavioral norms.

Harris explained this using Haberman’s Pedagogy of Poverty, a situation where students with low-income families or from urban communities are taught through a structure where they are under strict control by the teachers.

“(The Pedagogy of Poverty) is where you have educators who may be afraid of the students, don’t immerse themselves in the community or don’t come from the community and don’t take the steps to learn about it,” Harris said. “And they do things like, ‘I will reward you for sitting quietly. You will get points for conforming to how I expect you to behave’ as opposed to creating a classroom space that’s facilitative of creativity, critical thinking (and) deep analysis.”

“And then you have the rest of us in the middle,” Harris said, “bouncing our heads back and forth, wondering what their problems are, because at no point do they say ‘I know we all are working for kids.’ … At this point, we are at a critical point in our society, particularly with the unrest we’ve seen since the 2016 election. We have to refocus on children, and we have to refocus on equitable access to opportunity.”

Harris explained that the Every Student Succeeds Act (ESSA), a 2015 Obama-administration law that replaced President Bush’s No Child Left Behind Act, is actually a civil rights law.

“Does anyone know what type of law ESSA is? Who is it targeted at?” Harris asked the audience. No one responded. “ESSA is a civil rights law. Have any of you ever heard of it referred to that? No. And this begets the problem of EduWars. When you’re not talking about the thing and naming it, and therefore using it for the purposes that it’s intended, this is not just about random reforms, this is a civil rights law.”

ESSA requires school districts to come up with an equity plan to observe where resources are concentrated. It also requires schools to prepare students for the future of the workplace in an equitable way.

“That’s a big number,” Harris said. “And when you have federal legislation like ESSA being a civil rights law, yet most people understand or talk about it in that way — how do we close that gap in opportunity? Well, the answer is, you have to name a thing a thing.”

Harris displayed three terms: at-risk, urban youth, and opportunity youth and then asked the audience what people the terms were referring to. Some students used the terms in the definition, and Harris repeatedly asked who, specifically, they meant.

“The challenge is this isn’t people-first language,” Harris said. “Not a single one of these (terms) is appropriate to be defining young people. But, in the EduWars, people who feel like they are working on behalf of students and communities who need equitable access to opportunity are the first ones using these words. ‘I work with at-risk youth.’ Who are you talking about, when did they become at-risk?”

Harris said that her three black, female daughters are also at-risk despite coming from a family where both parents went to college.

“They’re at-risk because they wake up every day black and female,” Harris said. “Yet, we use these terms ‘urban youth’ as coded language. If you’re talking about the black kids, say it … because you cannot find resolution if you don’t name the thing a thing.”

Policies need to be created with communities, not to communities. Well-intentioned people, Harris said, who were not from communities have made policies that have not worked for students.

“In many ways, we’re at square one when it comes to gaps in achievement,” Harris said.

“Often times, in my space, not a single educator, parent or student is in the space, much less on a panel,” Harris said. “I will not accept the panel invitation if there’s not an educator or student on it. Because they’re an expert, and they live the experience. If the room’s not hearing their ideas balanced against my ideas … then the conversation is not rich and robust. It’s my responsibility to say that I don’t want to participate in the warring between charter and non-charter, corporate reform … instead, I want to work towards solutions.”

Harris concluded by reminding the audience that it is important to use people-first language to ensure that it is clear for whom they are fighting. She also advised against romanticizing Brown v. Board because the concept means that if black and white kids simply sit together, black kids will get a better education. This led to many black teachers and teachers of color losing their jobs.

“We also can’t sit on our high horses, either from academia or a think-tank or wherever we may work, and say we have the answers,” Harris said. “If your practice doesn’t take a race equity lens, if your practice does not support people coming to the table and really brainstorming and co-creating together, then you’re probably creating a policy that’s going to lead to another round of EduWars. Policy has to be done with community and not to community.”

Black people often don’t want to pull their kids out of the local schools, Harris specified, but that’s not what many people who support charter schools say.

“I had no knowledge of charter, public, all of these different things, and I like that she struck a balance between the good and bad of all of these institutions,” Garcia said. “Also, (Harris) described a solution that was based on focusing on community, which I really appreciated.”

Bulgarides said he took a lot from the lecture in relation to his own studies.

“Dr. Harris, unlike so many other visitors that we’ve had at Allegheny, did not lecture to us but engaged in a dialogue with us,” Bulgarides said. “For students who have not taken education courses, she certainly gave us reasons to care about inequity in education. She was a symbol of hope and progress.”