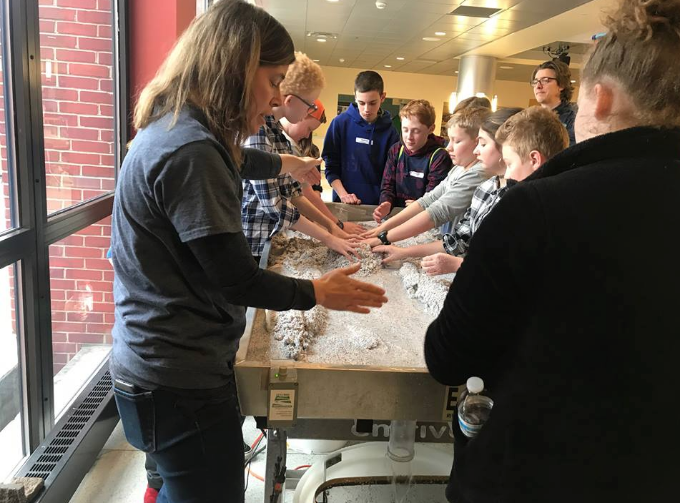 Representatives from the Erie County Conservation District conduct a focus group with students Friday, April 5, 2019, in the Henderson Campus Center as part of a Creek Connections symposium.

Allegheny students were joined by hundreds of young students last week. This time, the kids were doing the teaching and sharing their expertise with the campus community.

“This is a really big deal for us, it’s my first time, and I didn’t expect it to be this big,” said Madison Sherman, ’22, a first time Creeker, as those involved with the program are called. “I love it. (It’s) so amazing to see all the work these kids have done.”

Wendy Kedzierski, project director of the Creek Connections program, explained that their work serves as a staple environmental outreach program to educate thousands of youth, from Ohio to Michigan.

Their research specifically regards local water quality monitoring but they never discourage students and teachers from taking on other scientific projects, like unique or aquatic animals, environmental topics, recycling or energy consumption.

This year over 300 students participated in the first symposium, with a second symposium set to  take place in Pittsburgh Friday, April 12, at YMCA Camp Kon-O-Kwee Spencer with an expected 400 students.

For the first part of the day, eight groups of students presented their projects orally in Shafer Auditorium, while other groups or individuals created their own posters, which were stationed on the first and second floor of the campus center.

The groups of students who presented orally were considered some of the best ideas, with project titles ranging from “Fish Parasites,” to “Cracking Down on Crypto” and “How Does Climate Change Affect Maple Syrup Production.” These students came from Maplewood Jr/Sr High School, North East Middle School, Seneca Valley Intermediate High School, Youngsville High School and two seperate groups from both Conneaut Area Senior High and Northwestern High School.

“This opportunity allows students to share their voices and concerns for the environment,” said Chris Glenn, who works at The Learning Center.

It was her first year at the symposium yet, the students who presented from The Learning Center were prepared.

Projects were built around the theme “Form Follows Function,” Glenn said. In addition, they were structured with an architecture focus in mind, how it transitioned over time and how it works with the environment. Others chose to focus on an organism and how the anatomy and physiology of the animal does those same types of things.

Adaline Yeager, 12, and a student at The Learning Center, presented her research on wild cats.

“They can reach up to 10 feet with just one leap and sometimes higher,” Yeager said, describing the serval, a cat with long legs that has adapted to jumping over tall grasses in Africa.

“They have really strong back legs to eat birds,” Yeager said. “They jump up and fold their body in half around the bird and use their huge paws to swat and they have padded joint connectors that act as shock absorbers.”

To demonstrate more clearly, Yeager created her own video to present of a caracal leaping and catching its prey.

“I thought it was cool. I watched a video on YouTube about it,” said Justin Crawford, 11, who is also a student at The Learning Center and presented on underground houses. “Sand helps insulate better than dirt. The house is really heated and cooled by the earth, (with) windows on the south side and dark colored concrete floors because they absorb more heat. But it depends on where you live because here the earth is 51 degrees.”

However, students were not the only ones presenting. Organizations including Erie County Master Gardeners, Foundation for Sustainable Forests, Crawford County Conservation and Carnegie Museum of Natural History were also engaging students with environmental topics.

With Pymatuning State Park’s Department of Conservation and Natural Resources (DCNR), Linda Armstrong showcased the talons and skulls of a variety of local birds like red hawks, turkeys and owls.

Armstrong elaborated to student listeners, “Owls eyes protrude from the front of their head, and have 14 vertebrae in their neck, unlike a human who has seven. This allows them to turn their head completely around.”

Hannah Evans works with the Pennsylvania Intermediate Units, an education office that assists the state and its public schools, presented a new project, “What Happens to Your Poo When You Flush the Loo.”

With an application called Google Expeditions — a smartphone and cardboard goggle combo — students were able to hold the contraption to their face and become interactively immersed in another world.

“We bring these to classrooms for a virtual field trip,” Evans said. “It’s huge for students who don’t have access to resources.”

Students and organizations were dispersed throughout the college campus, participating in educational focus groups. The groups were guided in part by organizations and Creek Connections Creekers themselves.

The topics of the groups varied. For example, the Erie County Conservation District (ECCD) led the topic “Watersheds and Stream Formation” in the Campus Center balcony. Other topics ranged from a “Boating Safety Challenge” in the Wise Center, to “Oil Spill Cleanup” in Alden Hall and “Underwater Robotics” in the Mellon Pool.

One Creeker, Ray Marzalek, ’21, and his group focused on the site suitability for bog turtles in Carr Hall’s Geographic Information System (GIS) Lab.

“We focused on the French Creek watershed and wetland density, the distance from roadways and canopy covers to see which areas within the watershed would be good to reintroduce the bog turtle,” Marzalek said, a species decimated from French Creek due to tall, invasive grasses.

Two other Creekers, Isabella Petitta, ’21, and Brianna O’Neil-Hankle, ’20, got a bit messy as students painted their own squares to be stitched into one giant quilt. Titled, “Creatures of the Creek,” out of past Creek Connections T-shirts, O’Neil-Hankle had spent over seven hours sewing the border for the student pieces.

The finalized project will be hung in Carr Hall near the chemistry lab rooms.