‘It takes a village, privilege and individual effort’ 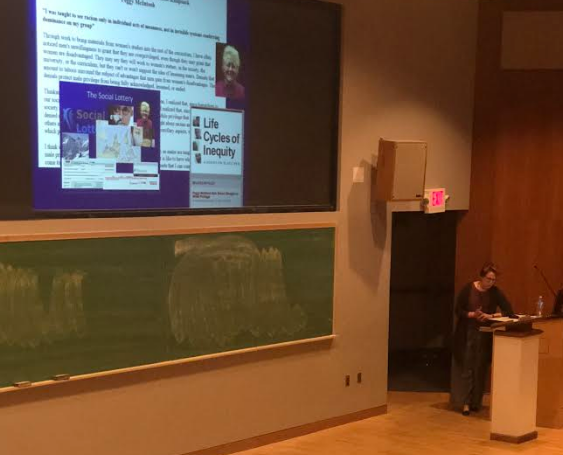 Lisa Parker, philosopher and professor at the University of Pittsburgh Graduate School of Public Health, presented her lecture titled, “Genetic Enhancement: A Game Changer for Sports and Social Justice?” on Tuesday, March 26, 2019, in Quigley Auditorium.

In its simplest form, genetic enhancement is the process of selecting genetic material to modify human traits.

Parker is a philosopher and professor of human genetics at the University of Pittsburgh Graduate School of Public Health, and her research is centered around the ethical management of pharmacogenomic research and genetic enhancement.

“Before we get started, I need to acknowledge the donor for this lecture,” said Kirsten Peterson, director of the health professions office.

Parker’s visit to Allegheny was funded through a donation from Jack Lehman, ’54. Lehman funded both Parker’s lecture and a portion of the medical ethics course that is currently being offered.

“Although Jack is no longer with us, he died a couple of years ago, his legacy lives on,” Peterson said.

Previously, the school has welcomed guest lecturers such as Mark R. Wicclair, who presented a lecture titled “Conscientious Objection in Health Care: Deciding When to Accommodate Health Professionals.” Similarly to Parker, Wicclair is a philosopher who teaches at the University of Pittsburgh.

“It is my very great pleasure to introduce Dr. Lisa Parker,” Steven Farrelly-Jackson said. “I met Lisa at a conference last year and told her she would be a wonderful person to come up here.”

Farrelly-Jackson is an associate professor of philosophy at Allegheny, whose research focuses on philosophy of literature, epistemology and global health ethics.

“Her work is further distinguished by her use of feminist approaches to bioethics questions and then the critical analysis of bioethics as a social practice,” Farrelly-Jackson said.

“Ultimately, I want to consider the notion of deserved or earned advantages,” Parker said. “I want to focus for a while on performance enhancement in sport, and then later I will turn to broader social context.”

“Our genome is quintessentially natural, given and beyond our control,” Parker said. “We used to think our fate was in the stars, but now we know that in large measure, our fate is in our genes.”

“Some parents and individuals take advantage of such testing,” Parker said.

Parker said this type of genetic testing is advertised to give parents and coaches early information on their child’s predisposition in sports, including speed and endurance. However, many critics do question the test’s reliability and can cause children to be unfairly pressured and miss opportunities to build character.

During Parker’s lecture, she explained that forms of genetic modification include preimplantation and prenatal detection of relevant genetic material, which allow for the implantation of selected embryos or the termination of pregnancies that do not produce certain genetic material.

“Children born would have an increased likelihood, but no guarantee, of demonstrating superior athletic aptitude,” Parker said.

Parker mentioned that newly emerging techniques and procedures for genetic modification have been successful in mice, rats and monkeys.

Parker explained the ethics of genetic enhancement essentially boil down to questions of fairness.

“The whole point of training and strategy and playing the sport is to obtain and demonstrate strategy advantage over competitors,” Parker said.

An unfairly gained advantage is one that is unearned, unmerited or undeserved, according to Parker.

Genetics, when they are not modified, form what can be called a “natural lottery.” Some people benefit from this lottery and are born with unearned advantages, while others are not.

“Differing natural ability are a result of the lottery,” Parker said. “Those advantages and disadvantages of nature are beyond the control of the individual.”

Therefore, Parker argued that the problem with genetic modification is not actually that the modification results are unearned. Instead, the problem must be that access to technology to perform genetic enhancement is both unearned and unfairly distributed.

However, problems associated with unearned and unfair distribution also occur outside genetic enhancement, according to Parker.

For example, some children are born into families that prioritize sports and spend great amounts of money on private coaching, while other families either cannot afford those resources or do not care to spend their money on them.

Advantages such as being able to afford a renowned coach are not earned, yet they are not considered to be unfair.

“The concern instead is that enhancements, like steroid use or gene doping, are unfair because they disrupt the fundamental goals of sport and violate its particular conception of fairness,” Parker said. “Neither sport nor just societies seek equality of outcome. Instead, both seek a level playing field.”

An argument Parker brought up during her lecture was that the entire concept of sports is to test athletic ability and not the ability of modern technology.

Recent revelations in sport enhancing drugs and genetic enhancement have caused the athlete to no longer be the one responsible for his or her successes.

“(Success) does not result from an age or a developed ability, which is the point of the competition or test, ” Parker said. “Rather, it results from an external factor, the ability of one’s body to efficiently utilize a drug.”

“All theories of justice seek to eliminate at least some formal and informal barriers to the exercise of one’s abilities,” Parker said.

Historically, sports do ban items, such as steroids and polyurethane swimsuits, because these items give athletes unfair advantages. However, there are no restrictions on other things, like how much coaching an athlete can receive or the quality of shoes a tennis player can wear.

“We have to decide how we are going to treat future genetic enhancement,” Parker said. “Now we can go on to argue that whether the enterprise of sport can consistently justify its decision with genetic enhancement will depend both on the decision that is made and on what view of individual effort we can ultimately maintain.”

“It takes a village,” Parker said. “It takes privilege and a village that works behind the effort.”

“The question then becomes, can we tell whether you have been genetically modified as opposed to the product of natural evolution?” Parker said.