Local storytelling: Keeley shares life, work of Vogans in new documentary, ‘This is a Cemetery: Greendale’ 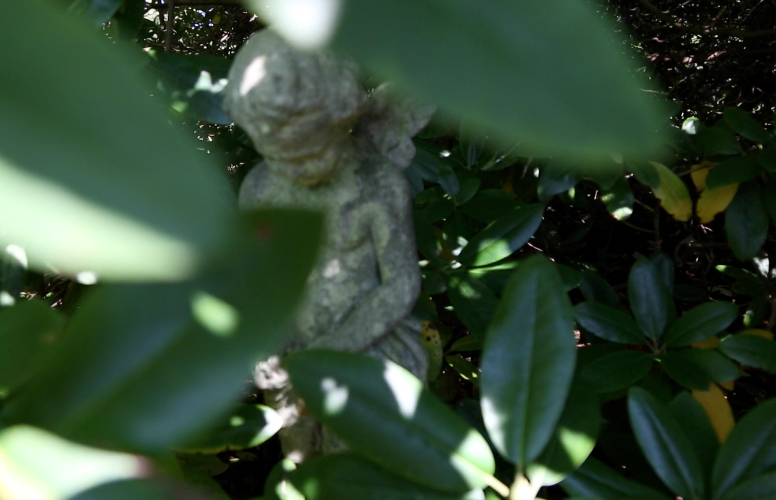 A small cherub statue is visible through rhododendron branches at Greendale Cemetery on Randolph Street, in Meadville, one of many “hidden treasures” described by Michael Keeley and Mary Vogan in ‘This is a Cemetery: Greendale.’

“There’s so many hidden treasures here,” Michael Keeley remarked to Mary as he stood behind a video camera capturing the essence of Greendale Cemetery on Randolph Street last year.

Mary and her husband, Jim Vogan, have cared for Greendale’s 200 acres for more than three decades. Jim plans to retire in December 2019 after serving as Greendale’s superintendent for 38 years.

The Vogans and Greendale caught the attention of Keeley, Allegheny College professor of communication arts/theatre, last spring, and Keeley decided to tell their story in a 67-minute documentary, “This is a Cemetery: Greendale,” which premiered at 7 p.m. Feb. 28, at Park Avenue Cinema.

The free screening drew more than 200 people to the theater, prompting Seth Groover, Park Avenue Cinema manager, to turn people away from the 7 p.m. show and host an unplanned second screening at 8:30 p.m.

“We’ve tried film festivals before,” Seth said, who screened Keeley’s “940 Park Ave.” documentary at Park Avenue Cinema in 2016. “None of them have been as successful as Michael’s.”

A sheet cake complete with iced headstones and flowers waited in the lobby of Park Avenue Cinema as people filed through the theater doors after the first screening. 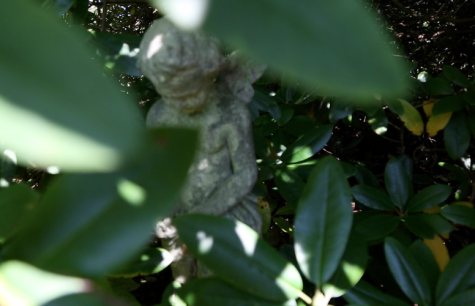 Contributed by Michael KeeleyA small cherub statue is visible through rhododendron branches at Greendale Cemetery on Randolph Street, in Meadville, one of many “hidden treasures” described by Michael Keeley and Mary Vogan in ‘This is a Cemetery: Greendale.’ 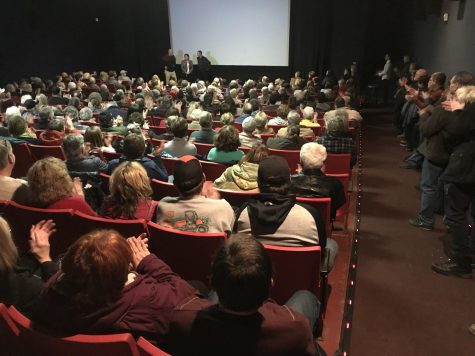 Ellis GiacomelliA full auditorium at Park Avenue Cinema applauds after the premier of Michael Keeley’s documentary, ‘This is a Cemetery: Greendale,’ which was screened at 7 p.m. Thursday, Feb. 28, 2019.

“I hope you enjoy being in the cemetery for a while,” Keeley told an audience of about 50 people at the start of the evening’s second screening. “There’s poignant moments and quiet moments, but there’s also moments where people are laughing. There’s a sense of humor to it.”

Keeley said he knew he would be able to film visitors on Memorial Day weekend and wanted to record moments of people spending time on cemetery paths where the rhododendrons would be in bloom, among rows of loved ones and along wooded trails.

From the initial day of filming, Keeley returned to Greendale to film the changing seasons, capturing the cemetery and park in all weather conditions, through the summer months until November 2018.

Walking down the front steps of the superintendent’s house and unlocking the front gates of Greendale, a shot of Patrick Groover opens the film, which covers the lives of Jim, Mary, Patrick and other crew members, operations of the historic cemetery and park and offers glimpses into the future of Greendale.

Patrick, assistant superintendent of Greendale and nephew to Jim and Mary, now lives on the grounds, in the house where Jim and Mary raised their children.

Following Patrick and the Vogans through the cemetery and park grounds, Keeley chronicles the leaf-blowing, weed-eating, flower-planting, grave-digging lives of his caretaker subjects.

With camera in hand, Keeley toured the grounds with Mary, who periodically paused at historic stones and plots, recounting stories of Civil War veterans, Allegheny College presidents and students, the inventor of the zipper — Gideon Sundback — and the first burial at Greendale.

By the mid-1800s, bodies buried in Mead’s original cemetery were moved to the current Greendale grounds a few blocks east on Randolph Street. 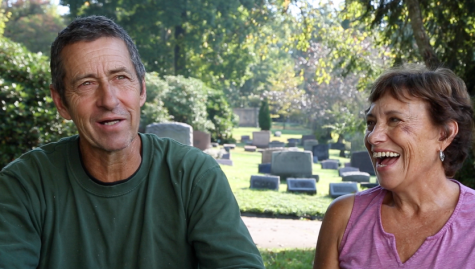 Contributed by Michael KeeleyJim and Mary Vogan sit for an interview with Michael Keeley, who produced the 67-minute documentary ‘This is a Cemetery: Greendale.’ Jim has served as superintendent of Greendale Cemetery since 1981 and plans to retire in December 2019. 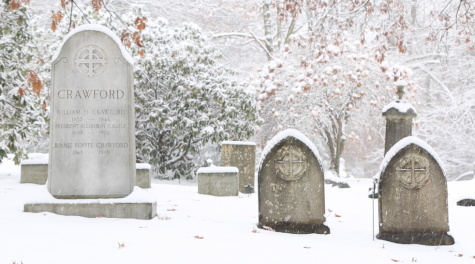 “When they brought David Mead up from the old burial ground to our cemetery, as they were putting him in the cemetery at our place, they found out they had the wrong person because they found square cut nails in his casket, and they knew that wasn’t right,” Jim laughed, as he told the Park Avenue Cinema audience after the second screening. “So they had the wrong person, and they went back and got another person and declared him David Mead. We think we got David Mead.”

Punctuated by moments of peaceful instrumentals and anecdotal history lessons from Jim and Mary, the charm of “This is a Cemetery: Greendale” is best described by George Shepard, whose words are inscribed on a stone at the entrance of Greendale.

“A cemetery is a history of people — a perpetual record of yesterday and a sanctuary of peace and quiet today,” the stone reads in part. “A cemetery exists because every life is worth loving and remembering — always.”

Shepard’s short poem, “This is a Cemetery,” is reflective of how Jim and Mary think about their lives at Greendale, and how Keeley wanted to represent the space. Cemeteries do not have to be scary or creepy places, the Vogans argue in the film. In fact, Greendale serves as both a cemetery and park, with wooded trails along a ravine.

Cemeteries and their grounds can represent the shared history of a community and its people, an idea Keeley said is sometimes forgotten in contemporary, local storytelling.

“There’s a real gap in media for focusing on the community you’re in,” Keeley said. “There’s a lot of great stories right here.”

A new chapter in Greendale’s story is about to be written, as Patrick is set to be superintendent after Jim retires in December, and is working to fully digitize land maps to create a comprehensive and convenient database of cemetery information.

Some resources are already available on the Greendale Cemetery website, which was redesigned in the last month by Patrick, Jim and Mary’s son Daryl Vogan, and software engineer Reed Dunkle. The reconstructed website features photographs, an overview of Greendale’s history and services, as well as maps of cemetery plots and sections. 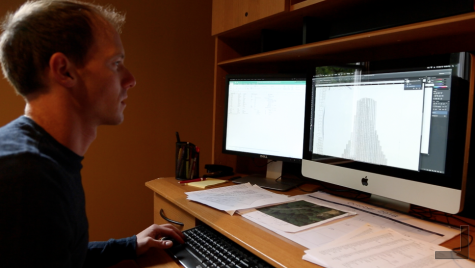 The maps were originally in paper format and required careful tracing and overlaying to transform into digitally-accessible images. In the next few years, Patrick estimated, he plans on developing an app on which the maps will be available and users can search for plots, headstones of family members and scans of obituaries and stories related to the deceased.

Keeley hoped to share the treasured history and hopeful future of Greendale through the project, but he said he did not imagine sharing it with a packed auditorium, where people lined the walls, standing.

Mary told the full auditorium she felt “overwhelmed” by the support of her community when the credits rolled after the first screening. Audience members flocked to the front of the auditorium to thank Keeley for his work, to thank the Vogans for their decades of dedication and to thank Patrick for carrying Greendale’s legacy.

With a tight shot of a headstone’s intricate cut-out design, a lanky spider enters the frame of the closing image. The spider pauses, almost looking into the camera. Then, it scurries out of frame, disappearing behind the headstone.

Keeley was particularly excited about capturing the spider’s moment, capturing a crew of grave diggers over the course of a few days, capturing the secrets hidden in the rhododendrons and the snow dancing among sleeping bodies.

A third screening of “This is a Cemetery: Greendale” is scheduled for 7 p.m. Thursday, April 11, in Allegheny’s Gladys Mullenix Black Theatre in the Vukovich Center for Communication Arts.