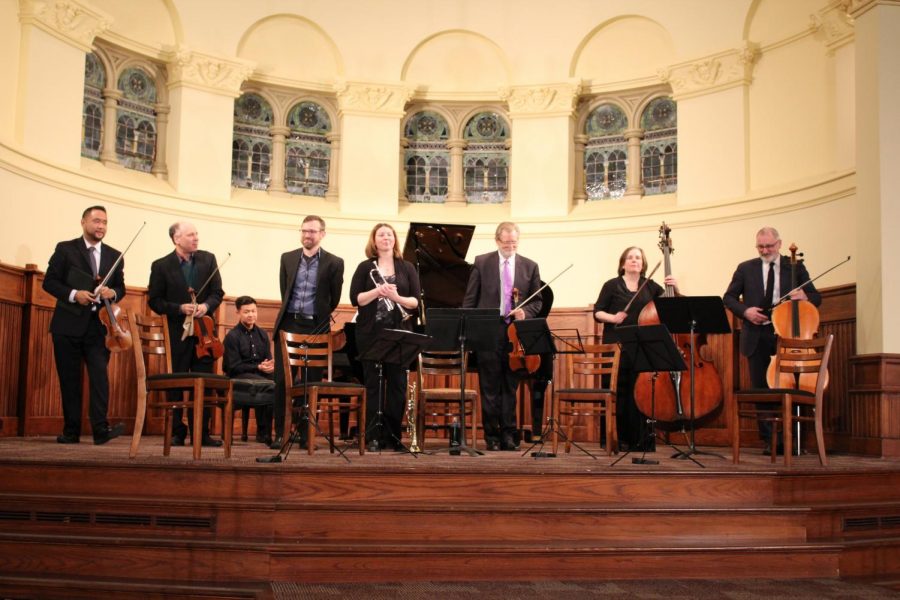 This idea — a notion of four different instruments and four different musicians coming together as one voice —was present in the Alexander String Quartet’s week of public and class performances at Allegheny College, according to Megan Kresse, ’22.

Kresse, who saw the ASQ perform in her music theory class before its public concert in Ford Memorial Chapel on Friday, March 1, said hearing them talk about the steps they take to practice was awesome.

“My favorite thing is how the four of them are able to sound like one person, how they balance their sound,” Kresse said.

The string quartet, comprised of two violin players, a violist and a cellist, became a popular chamber ensemble for classical music, “with most major composers, from the late 18th century onwards, writing string quartets,” according to a Lumen Learning Music Appreciation article. “The origins of the string quartet can be traced back to the Baroque trio sonata, in which two solo instruments performed with a continuo section consisting of a bass instrument (such as a cello) and a keyboard.”

During the 16th and 17th centuries, Gregorio Allegri was an Italian composer who created the prototype for the string quartet, as his music included parts for a string ensemble, according to Lumen Learning’s Music Appreciation. By the time the quartet itself was created, in the 18th century, composers had already begun to replace keyboard sections with the cello, another base instrument.

Franz Josef Haydn, given the nicknames “Father of the String Quartet” and “Papa Haydn,” created the string quartet during the mid-18th century seemingly by accident, according to Portland Center Stage. When Haydn was 18, his boss, the Baron Carl von Joseph Edler von Fürnberg, asked for music, but the only available musicians, “the village pastor, the Baron’s steward, Hadyn, and another musician named Albrechtsberger,” were two violinists, a violist and a cellist, according to Portland Center Stage. To fulfill his boss’ demand, Haydn created the quartet.

Today, the string quartet is intrinsically tied with the notion of classical music — and it was in this cultural mindset that the Alexander String Quartet was born.

Formed in 1981 in New York City, the ASQ currently resides in San Francisco, serving as Ensemble in Residence for San Francisco Performances since 1989 and Directors of the Morrison Chamber Music Center in the College of Liberal and Creative Arts at San Francisco State University, according to the quartet’s website.

The ASQ has received numerous accolades for its performances and work in the industry, including honorary degrees from Allegheny and St. Lawrence University, and in 1985, the ASQ became the “first American quartet to win the London International String Quartet Competition,” according to its website.

Zakarias Grafilo, Frederick Lifsitz, Paul Yarbrough and Sandy Wilson, the ASQ’s four members, joined the quartet at different times. When Lifsitz, the quartet’s second violinist, was asked to play with the ASQ before he officially became a member, he described the feeling as “lightning struck.”

With its honorary degree from Allegheny, the quartet has been visiting the college since 1991, playing music and providing history lessons to contextualize each piece for students.

Lifsitz said that visiting college campuses keeps the ASQ from jumping from airplane to airplane, city to city.

Speaking with a group of students allowed to listen to a private session, cellist Wilson explained the way he felt about playing music for an audience, especially one comprised almost entirely of young people.

“I think it’s interesting to contemplate what we’ve done,” Wilson said. “We’ve played music for you, and you’ve listened. I’ve got to respect that convention. So often, we experience music through our earphones in a particularly passive way.”

A majority of the ASQ’s interaction with Allegheny students occurs in the various classes they visit, some music-based and others not. Prefacing the music they choose to play as “boisterous movements,” Lifsitz discussed his and the quartet’s love for showing students this side of music.

“Another thing we love (is) certain classes where students listen so extraordinarily,” Lifsitz said. “That’s one of the highlights of my career.”

Professor of Biology and Neuroscience Lauren French echoed Lifsitz’s love for seeing the way music affects students. Through a Gateway 100 course, French and Director of Pre-Professional studies Kirsten Peterson organized a private session for Honors Program students to meet with the ASQ in Ford Chapel.

“I’ve always been looking for ways to bring students to them,” French said. “(I wanted to) give a chance to have an education experience in a completely different setting and just enjoy it.”

French’s desire was to see the type of music the quartet played to be accessible to students from multiple disciplines at Allegheny.

“I have some students who have a music background and others who don’t … it’s inaccessible,” French said. “It strikes students differently. For some, it’s the unfamiliarity that feels more inaccessible … I do think it’s a wholly unique experience.”

The unique experience French finds in music is applicable to the ASQ, especially in the way they travel, according to Wilson. Meeting new people and experiencing new cultures and areas of the world is one of the job’s greatest perks, Wilson said.

“We’re there because we have a thing to do, we have music — the universal language,” Wilson said.

Playing the cello since he was about eight, Wilson began to seriously consider music as a career when he was about 13 because “all other things seemed too hard,” he joked.

Similarly, first violinist Grafilo and violist Yarbrough did not anticipate a career in music when they first began performing. When Yarbrough realized he wanted to play music professionally, he pursued his dream despite disapproval from his mother.

“It wasn’t her life I was living; it was mine,” Yarbrough said. “I haven’t looked back.”

Once he decided to pursue music professionally, Yarbrough joined the ASQ, adding that finding like-minded friends “who want to do what you want to do, it’s such a great thing.”

Since joining the ASQ, Yarbrough has experienced success in his field.

“The fact that I’ve been able to support myself and a family of four in this career has been a great source of pride,” Yarbrough said.

“When I was in college, I was doing my best not to go the music route — I was trying to discover other things — until I met the (quartet),” Grafilo said.

Lifsitz described the way he saw his job, and his ideas reflected the rest of the quartet’s love and pride for their career.

Staying true to its method of supporting young composers while paying respect to well-established pieces, the ASQ offered a “balanced meal” of music during its week at Allegheny that challenged audiences “by giving them widely accepted music and less accepted edgier music,” Lifsitz said.

After a week of playing at Allegheny, both for students and community members, Lifsitz summarized the ASQ’s experience on campus.

“Coming to Allegheny is always like coming home,” Lifsitz said.