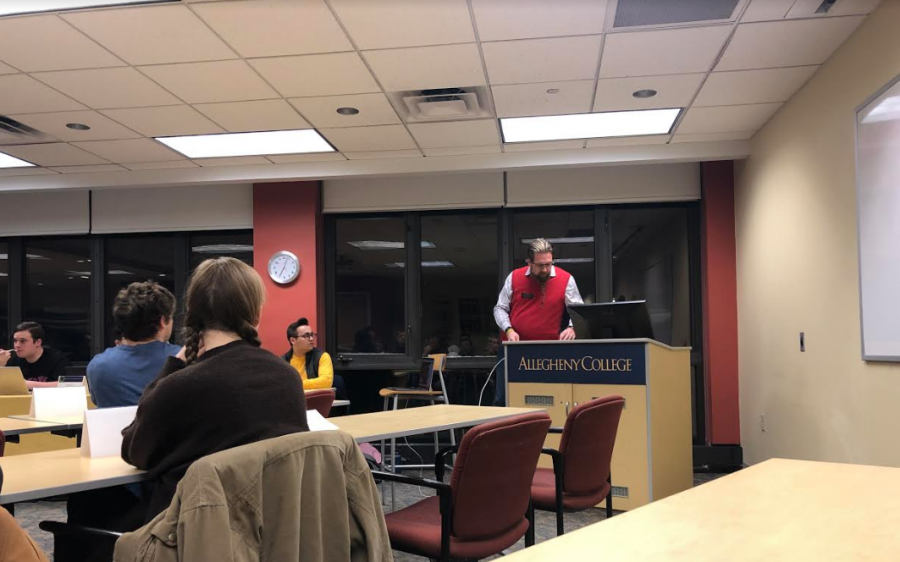 Turn and face the strange because Registrar Ian Binnington and the College Curriculum Committee are looking to make changes to Allegheny’s daily schedule grid — the time slots classes are scheduled in throughout the day.

Allegheny Student Government began its general assembly at 7:02 p.m. Tuesday, March 5, in room 301/302 of the Henderson Campus Center. The meeting agenda consisted of a visit from Binnington, a discussion about parking regulations, the approval of two club constitutions and a revival of the initiative to create gender neutral bathrooms throughout campus buildings.

The CCC is working on revising class scheduling in order to create more time slots throughout the school day, enhancing the number of class options available for students and professors. Though student representatives sit on the CCC, Binnington’s visit was meant to gauge student opinion on potential changes.

While Allegheny has used the same pattern for “several decades,” Binnington said its organization works in some ways but not in others, so there has been an ongoing conversation about how the CCC can reform course scheduling.

Any changes made to the curriculum undergo a revision process and must be voted on by faculty members before they are put into effect. Binnington said no changes were being made for the upcoming academic year.

“Clearly, it would take a number of years to implement,” Binnington said. “We’re not doing anything next year … I would quit before we did that.”

Working out possible revisions would take “a couple of years,” Binnington said, adding there is no guarantee anything will happen this year.

“We have been talking to a number of constituencies, academic departments, conference and events, athletics, and we wanted to make sure that the student voice was included in this,” he said.

Binnington said he was mostly interested in hearing opinions about the principles and concerns the CCC should consider while revising the grid.

Clarifying a question from Class of 2021 President Emma Godel, Binnington said the CCC is mainly focusing on the start and end times of classes. With this, classroom types need to be taken into account. Binnington used studio space and lab availability as examples.

“The goal is to increase student choice,” Binnington said, answering a question from Director of Communication and Press David Roach, ’21, about whether or not changes would help students who are deciding between major and minor requirements. “Right now, what we have is a situation for a variety of reasons that we are concentrating our classes in the middle of the day — roughly between 10 o’clock and 2 o’clock, and if you look at the pattern of when students are in class, there are obviously students in class late, but there aren’t very many doing those two things.”

“We are teaching four to five hundred classes a semester in five days,” he said. “We cannot eliminate choice. It’s always going to be necessary to choose between A, B and C.”

The revision process is in a “theoretical realm,” according to Binnington. The CCC has come up with and discarded a number of options, and Binnington said that is why he did not come to the meeting with a set proposal in mind. However, he did say the committee is working to see if it can incorporate time for business happening in the evening into other times across the grid. In addition, Binnington said he and committee members have also considered beginning the academic day later than 8 a.m. as well as looking at increasing the number of 75-minute classes.

“There are some kind of hard barriers that we’re up against,” Binnington said. “We only have a certain number of rooms. … We have enough, but we don’t have a surplus of rooms.”

The CCC has to be mindful about creating a grid that balances class times and spaces evenly, he said; avoiding the overlap of labs and other classes is a point of concern for the CCC.

“We want to respect the times that are set aside for important student activities and extracurriculars, particularly music (and) particularly athletics,” Binnington said. “We’re mindful that you guys have other things that are competing for your time, and we don’t want to have a situation where, not only are you having to make choices between one class and another, but now you’re suddenly having to make other choices between your music ensemble and your athletic practice.”

The balancing act required to effectively revise the scheduling grid requires CCC members to take into account extracurriculars and curriculum requirements while also working within a five-day timeframe.

“We can’t invent new days; we can’t build new buildings,” Binnington said, adding that the “room for maneuver” is not very wide once every factor is taken into account.

Class of 2020 President Elyse Cinquino asked about the varying minors that require a select number of students to take a junior seminar to fulfill their minor requirements. Binnington is also a professor of history and said Allegheny’s history department requires history minors to take a junior seminar because it acts as a capstone to the overall educational experience. However, each department decides specific requirements as they are the experts in their academic area of study.

“It’s certainly true that anytime … you have required classes it’s going to lead to schedule complications,” Binnington said. “And that’s why we encourage students as much as possible to plan ahead.”

Roach asked Binnington about how the new scheduling system will work to alleviate majors that are experiencing a “surge” in popularity among students.

“Those things are to a certain extent cyclical,” Binnington said. “And that makes them a little bit difficult to plan for but not impossible.”

When planning for scheduling and enrollment, Binnington said he and academic department chairs meet each year to predict how many seats are going to be needed for each class.

Though it is not an “exact science,” Binnington said he is able to look at past years enrollment to help him make these decisions.

“It kind of depends on what the particular student body composition and values of the institution are,” he said. “In our case, we kind of do a little bit of everything. We have a music program, but we don’t have a conservatory. We have a robust and significant athletics program. We have a lot of lab science departments, but we also have a lot of people that are doing humanities and social sciences that don’t have labs. So, we’re trying to do as much as we possibly can between 8 (a.m.) and 4:30 (p.m.) — accounting for lunch, accounting for this, accounting for that.”

Class of 2021 Senator Taylor Marzouca concluded the conversation by thanking Binnington and the CCC for their work and effort to try and piece together this “four-dimensional puzzle.”

“The whole reason that we do this is for you,” he concluded. “There’s no point in doing it otherwise. We’re not doing it for ourselves; we’re doing it for you guys.”

Binnington asked students to send feedback his way, to Jennifer Hellwarth, professor of English, or any student representatives on the CCC.

Echoing similar points made by Binnington, Chief of Staff Jason Ferrante, ’20, said the CCC’s open meeting went “okay-ish.” He added there was not a lot of representation across academic departments in attendance.

ASG’s constitutional revision process is “chugging along” with over 180 edits on its constitution, according to Ferrante.

To conclude, Ferrante said he is working with the Office of Public Safety and the general policy working group to see what the office’s policy is on ticketing.

“They expressed that they want to be fair to students, but their concern is situations where a student might park in one gold lot, get a ticket, move to another gold lot in the same day and then be surprised that they got a second ticket,” Ferrante said. “So, we’re going to work on that.”

Roach, who was the initial person to raise the concern in a previous meeting, clarified the original issue was about students who received two tickets within 24-hours in the same parking spot.

During his report, Roach told ASG members to encourage their friends to vote, especially seniors.

“Tell your friends; make sure that they vote,” Roach said. “We’d love to get some good voter turnout this year.”

After ASG voted to approve constitutions from the Allegheny Mental Health Awareness Club and the Sportsmen’s Club, Monessha Jabaylan, ’19, attorney general, also reminded ASG members to vote in the election.

Director of Sustainability and Environmental Affairs Cat Lord, ’20, reported that the dining committee is working to incorporate more vegetarian options into the main line at Brooks Dining Hall with the hope of cutting down on meat consumption.

The Class of 2020 welcomed a new senator into its ranks with the swearing in of Zach McClarnon, a student who said he was “all about government” and wanted to cause some change from the inside.

During her report, ASG President Camila Gomez, ’19, encouraged students to vote in the ASG presidential elections.

In new business, Roach, who is also an admissions tour guide, asked a question about labeling the gender neutral restroom on the first floor of the campus center, located in the art wing. The restroom is not marked as a bathroom and instead has “A 109” on its door.

“When we are doing open houses, there is only one gender neutral bathroom in the campus center,” Roach said. “…There’s nothing to distinguish it as a bathroom … is there some way to label it or practice what we preach, in a way, so that it is accessible to people who are trying to use it?”

Gomez answered the concern by saying she was sure ASG could get “some signage” for the restroom.

Additional discussion about whether or not an initiative to increase the number of gender neutral restrooms on campus was on ASG’s agenda. Ferrante said the matter would be discussed and taken into account as the college prepares to make renovations over the summer.