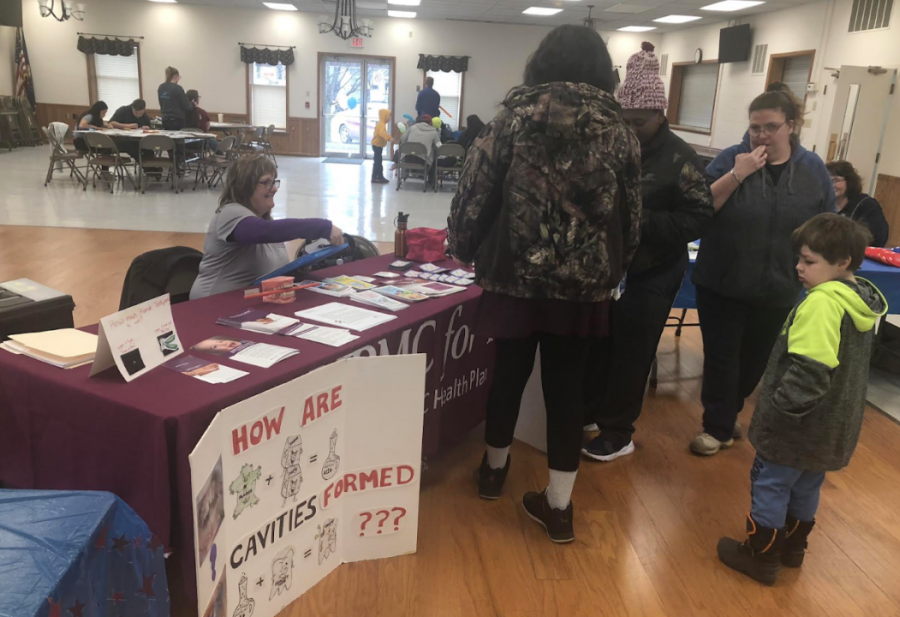 Janet Beers, a representative for UPMC for you, provides materials on dental health to attendees of the Children’s Dental Health Fair Saturday, March 2, 2019, at the Lew Davies Community Building.

Wellness is a hot topic  — physically, mentally and socially; however, dental health gets lost in the discussion. Allegheny’s Pre-Dental Society’s annual Children’s Dental Health Fair aims to remedy this gap.

The Pre-Dental society hosted its 5th annual dental fair in partnership with the Meadville Medical Center on Saturday, March 2. The fair took place at the Lew Davies Community Building.

Promoting oral health throughout Crawford County is only one of the Pre-Dental Society’s goals. The society also aims to help Allegheny students prepare for the Dental Admissions Test and provide advice for students applying to dental schools.

While the fair was geared towards children 15 and under, information was widely available to people of all ages.

Since the mid-1940s, fluoride has been added to water supplies throughout the United States to increase overall dental health and decrease tooth decay.

In 1945, Grand Rapids, Michigan led the movement and was the first community in the United States to add fluoride to its supply of drinking water. The addition provided Grand Rapids with lower levels of tooth decay and cavities.

In fact, the U.S. Center for Disease Control and Prevention classified fluoridation of community drinking water as one of its top 10 greatest public health achievements in the 20th century.

It wasn’t until the past decade that researchers began to reconsider the benefits of adding fluoride to drinking water.

The lack of evidence supporting fluoridation as the cause of increased dental health is just one reason why people oppose adding fluoride to drinking water.

The Fluoride Action Network released a list of 50 reasons to oppose fluoridation in 2012. The Network explained that when fluoridating drinking water, the dose of fluoride each person receives cannot be controlled because there is no way to monitor each individual’s consumption of water.

The fluoride is also being consumed by all people regardless of age or vulnerabilities. This means that infants, who don’t need protection against tooth decay, are being served fluoride when drinking water is combined with their formula.

Other reasons to stop fluoridation, according to the Fluoride Action Network, included unhealthy fluoride accumulation in the human body, that tooth decay does not increase when fluoridation is stopped and that fluoridation may potentially be linked to a number of negative health effects including impaired thyroid function and reproductive issues.

In June 2017, the Meadville Area Water Authority voted 3-2 in favor of Meadville adding fluoride to the city’s water supply.

However, it wasn’t until July 2018 that the Department of Environmental Protection issued Meadville the necessary permit to install the equipment needed for the fluoridation of the city’s water supply.

An official timeline for the fluoridation of the Meadville water supply is not clear.

In the meantime, the Children’s Dental Fair provided a number of different ways to promote dental health without fluoride in drinking water.

“(The fair) is just a way to reach out to kids in Meadville and around the area to give them more information on dental health and why it is important,” said Morgan Richie, ’19. “Hopefully, they will see that (dental health) can be fun for them.”

A number of different organizations were represented at the fair, each encouraging kids to stay on top of their dental hygiene. Meadville Medical Center, UPMC, Active Aging and the Crawford County Dental Society were among the organizations represented.

One table at the fair encouraged children to make smart beverage choices, explaining that many beverages contain added sugars that are detrimental to dental health and provide little to no nutrients.

A report by United Concordia Dental concluded that sodas such as Mountain Dew, Pepsi and Dr. Pepper contain over 15 teaspoons of sugar. This is nearly double what the American Heart Association recommends for daily sugar intake. The recommended daily intake of sugar is 9 teaspoons for men and 6 teaspoons for women.

UPMC for you, a medicaid program, was also represented at the dental fair.

“My main goal is to make sure people walk away with some education on dental health,” said Janet Beers, a representative for UPMC for you.

Beers encourages people to brush their teeth two or three times a day using a pea size amount of toothpaste. She also recommends drinking lots of water throughout the day and only consuming drinks high in sugar with meals.

Beers also warned against drinking milk before bed, explaining that calcium and fluoride cancel each other. She suggests waiting 30 minutes both before and after brushing teeth to consume any product containing calcium.

“We also have other organizations here such as Head Start that are part of the Meadville community so they can see what else is in the community to help them with overall health,” said Alexandra Metzger, ’19.