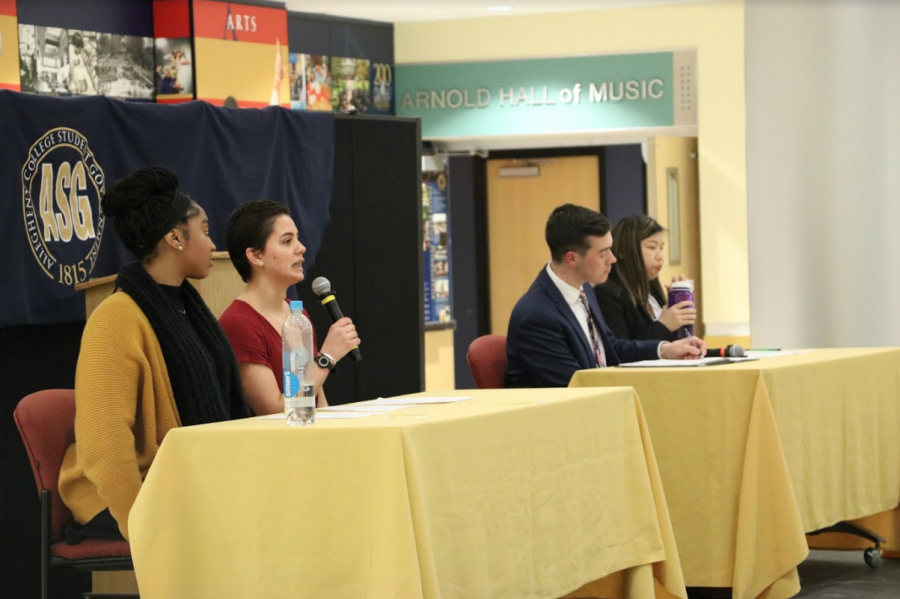 The debate provided the candidates with an opportunity to discuss their platforms and any other topics either provided by moderators or audience members. Topics such as student retention, student mental health, campus waste and lack of ASG senator-student engagement were discussed by the different candidates.

Candidates brought forth similar platforms when answering the questions asked by Director of Career Education Jim Fitch, who was asked the week before the debate to serve as moderator.

“Allegheny’s biggest asset is its diversity of people, of backgrounds and of ideas,” Ferrante said in response to a question about retention rates dropping for the college.

Ferrante and Cinquino focused on the diversity of the student body as a benefit to the college and the increasing price of tuition being a factor for the dropping retention rates. They shared their goal of putting in place foundational policies that would help students with the cost of higher education with different grants and aid.

Marzouca and Hester answered the prompt in a similar way, addressing diversity as a key factor. By focusing on the programs and established organizations at the college, students of color or low income will have a better chance to be retained by the school.

“We took a different stance on the issue of mental health,” Marzouca said. “We want to go ‘okay, what’s the real source of these problems that we see on our campus.’”

Marzouca, when explaining her stance on mental health, discussed minimum wage and Allegheny’s intense workload as prime factors affecting the mental health of students. By increasing the minimum wage for students, Marzouca said, students can work fewer hours to focus more on academics. She also mentioned creating a policy that schoolwork cannot be assigned for the week following a break; students could increase the amount of academic productivity and fully recharge during breaks.

Ferrante and Cinquino focused on Allegheny’s shortcomings in regards to mental health issues, along with the possibility of adding an online booking option for the Counseling and Personal Development Center. Having open discussions about mental health is a key way to encourage students to seek assistance and better improve the overall health of the campus community, according to Ferrante.

Sustainability was a topic for which both sides argued several points.

Ferrante took time to address how much the campus already has done to help with increasing sustainability. To do more, Ferrante and Cinquino want to increase the amount of food waste prevention practices the school already has in place.

Similarly, Marzouca and Hester said food waste was a factor preventing the campus from being more environmentally friendly and sustainable. Along with focusing on food waste, the paper waste resulting from the paper towels in bathrooms was also a concern.

“You guys can see that the amount of waste paper towels comes from them being everywhere,” Hester said. “So that is one thing we wanted to change and put a stop to.”

The lack of ASG senator-student engagement is something each side said was directly affecting the relationship the school has with the student body.

By providing different options for students to have their voices heard, Ferrante and Cinquino said they believe students can increase their general awareness of ASG and the resources that can be obtained through it. Overall, Cinquino’s goal is to bring ASG to the student body to foster a relationship with the people the government supports.

“I have no reservations bringing up controversial issues with the administration,” Marzouca said. “At the end of the day, we (ASG) are here for the students.”

Marzouca mentioned that conflicts have occurred between the student body and the administration, and the president of ASG is responsible for helping support the voice of the student body.

Constituents also had questions prepared for the candidates on the stage. The mural that was previously on display in the campus center that has been the subject of recent controversy was one question in which both presidential candidates gave similar opinions.

Ferrante also discussed the procedure that the administration, the artist and the public have gone through was the proper response to the situation.

Marzouca agreed with Ferrante on the procedure being the correct course of action but had more to say about the underlying issue with the mural.

Each candidate was able to share their platform during the debate, and the main differences between the two pairs seemed to reside in the candidates’ rationale for running.

“I think one aspect that Jason and I have a strong point in is our experience,” Cinquino said. “We have also been involved in other organizations outside of that. Not only do we have experience with ASG and know ASG people, we also know other people that are not on ASG which I think is really helpful for getting input.”

While Ferrante and Cinquino stuck with experience being their biggest asset, Marzouca and Hester highlighted their different roles at Allegheny as their primary reason for wanting the leadership positions.

“The reason we are running is to preserve the sense of democracy in ASG because Jason would have run uncontested,” Marzouca said. “But there were issues we felt coming from someone who has not been in ASG and then coming from someone who has been in ASG, that we really could collaborate on the vision we want to see in this school in a way we really haven’t seen before.”

The presidential elections will start at 8 a.m. March 6, and will end at 5 p.m. on March 8. Voting forms can be accessed through WebAdvisor.