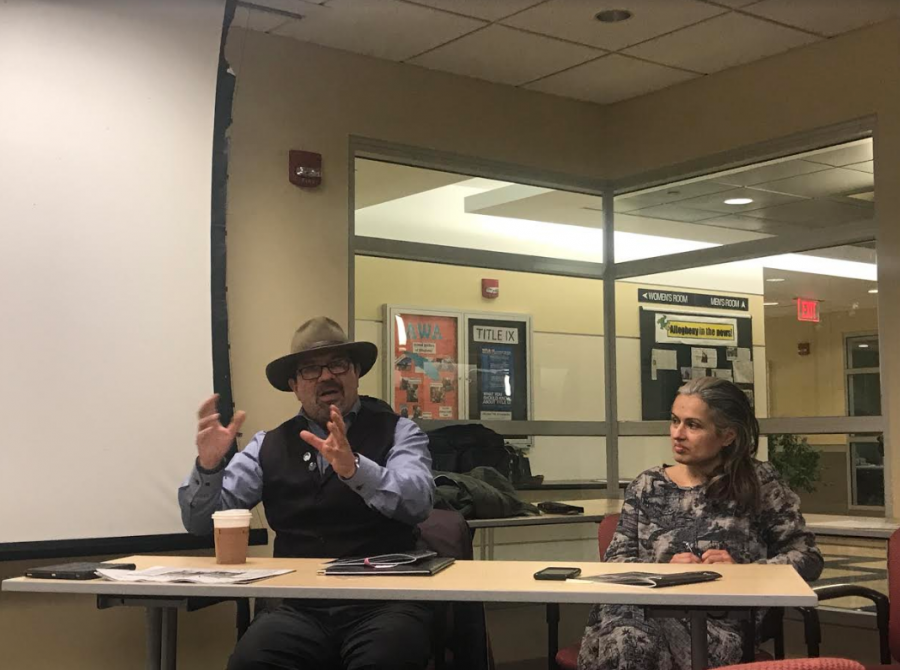 Rodolfo Guzman and Kristina Bogdanov talk to faculty and students about their work and experiences during a panel Tuesday, Feb. 19, 2019.

For artists Kristina Bogdanov and Rodolfo Guzman, memory and space are key themes that influence their artwork — pieces that illustrate immigrant experiences and journeys.

The Border Crossings panel was the first of three discussion panels planned in conjunction with the Challenging Borders art exhibit which opened Jan. 29, 2019. The panel itself occurred Tuesday, Feb. 19, and featured two professors and artists from other colleges, Bogdanov and Guzman. Brian Miller, assistant professor of history and international studies also helped lead some of the discussion and spoke about his own work.

Bogdanov, associate professor of ceramics and drawing at Ohio Wesleyan University, shared her artistic pieces which focused on immigration and borders in her own life, having originally been born in Serbia.

Bogdanov shared her personal immigration and crossing borders story with a full room of students and faculty in Henderson Campus Center room 301/302. Bogdanov recalled  moments from when she first came to America, along with her very first memory of her drawing on the white walls of the hallway in the house where she lived with her parents.

“I learned two things that day,” Bogdanov said. “One, art is not always appreciated, but two, I wasn’t sorry … I always thought that I made that wall better. And I still believe that art makes things better.”

Bogdanov shared one of her works with the audience that portrayed pictures from her own life. Some of the pictures in her piece were from 1914, and up to the day before she made the piece in 2008. The photographs were displayed on cubes in a way that made the images look connected, like a chain. She said that even the shadows behind the cubes connected together to make it look like a DNA strand.

“I have to say that the piece surprised me as it was installed,” Bogdanov said. “That was something that at the time I had not predicted … Also I just happen to like cubes.”

Bogdanov said she used her pictures to help create relationships and to help her connect to her memories and her family. Other works of Bogdanov were based on what she remembered and witnessed during the “falling apart of Yugoslavia” which she witnessed at the age of 15.

Another work she made was based on stories of other immigrants who she had seen on the news. The piece about other immigrants was displayed on dryer sheets, mainly because of Bogdanov’s fascination with them when she first came to America.

“I’m very responsive to materials,” Bogdanov said. “This might be awkward, but I was really fascinated with dryer sheets when I came here, we didn’t have dryers.”

She explained how she regularly saved the used sheets, and at the time did not know what to do with them, so she used them for her art.

Bogdanov works mostly with clay and ceramics, and a lot of her work involves metaphors, specifically using birds to represent humans. She told a story of when she was 21 and had to live in a basement for three months during the time of the NATO’s bombing of Yugoslavia.

“We were just kind of wondering if we would survive, and if we would have a next day,” Bogdanov said. “And that’s a lot, to see your parents go through that kind of anxiety and to know there was nothing you could do to help them. And then with my sister having a nervous breakdown, that was a lot. I just remember having this one thought in my head, and that was I wish I was a bird.”

The bird metaphor was shown specifically in her piece “A House is not a Home.”

Guzman, associate professor of language and literature at Earlham College was the second to speak during the panel. His video and photography work focused on the daily lives of Colombians in Miami and New York City.

Guzman displayed a 10-minute video during his portion of the panel featuring these immigrants, but omitting their voices and focusing more on their faces to portray their stories.

After Bogdanov and Guzman finished, Miller talked about history and how borders were written into history. He described some of his own work, saying he works with migrants as his primary sources.

“I’m very interested in hearing (migrant) voices,” Miller said. “I’m interested in how they rate their experiences. I prioritize and use their voices to tell their own stories.”

After Miller finished, the artists described how they incorporate their work and life experiences into the classroom. Guzman asked students in the room how many have gone abroad, saying that the experience of travelling abroad can be similar to how immigrants feel when they cross a border.

“The point that I try to make is that we cross borders too,” Guzman said. “We are a privileged society. The people, the immigrants and those displaced from their own homes, especially in the United States, the people say, ‘we’re here because you were there first.’”

Bogdanov concluded the panel by asking the audience to think about the fact that leaving home is different for everyone, whether it is physically going from one point to another or something more. She then posed the question of how someone was supposed to pack to be able to leave their home.

“So how can you pack everything (you have)?” Bogdanov said. “When I came to America I had only one suitcase, and I struggled to fit everything, because even though it felt like I was missing something, it was like ‘oops that winter jacket just couldn’t fit in so guess what, (it gets left behind).’ It was a good thing that there was always good people. And there always is good people.”

Both Guzman and Bogdanov’s pieces are currently being featured in the Challenging Borders art exhibit in Doane Hall.