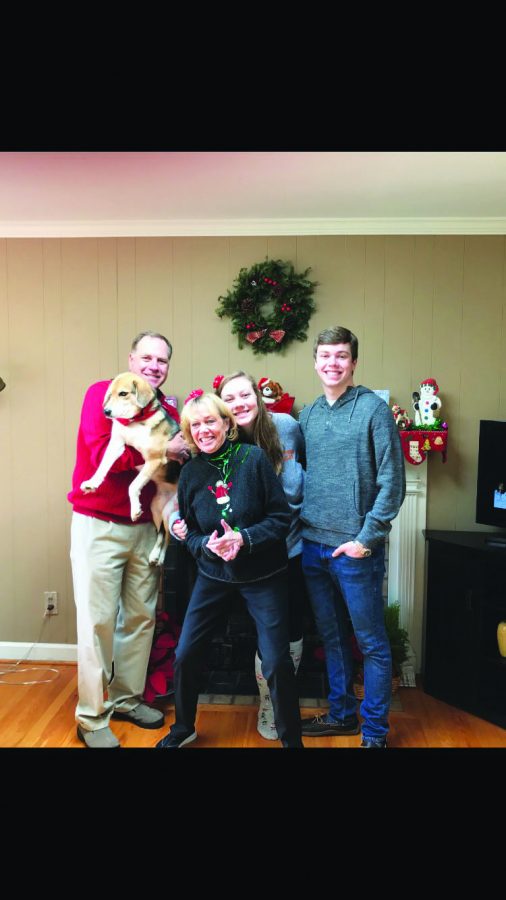 The Mullen family poses for a Christmas photograph in 2017.

When Allegheny College President James Mullen and Mari Mullen enrolled in the same college just a few years apart from each other, neither ever expected to get married, Mari said. Their minds changed while they were dating, and their 24 years of marriage have given James and Mari two children, numerous career opportunities and a competitive streak that spans from pickup basketball to board games. The couple said they have continued to teach and surprise one another even after nearly three decades together.

“Mari’s made me a much better person,” James said. “The way she’s helped me to always see the world from another person’s perspective before I judge, I think, has been a wonderful influence on my life.”

Although James and Mari Mullen did not begin dating until after they graduated college, both grew up in Massachusetts and attended the College of the Holy Cross. Mari, who was a first-year when James was a senior, said she often spent time with her resident assistant, who was James’ best friend.

While she is not positive they met during their college years, Mari said she was sure they must have bumped into one another at some point.

“I just have that charismatic way of making an impression on people, I guess,” James joked.

When James was about 28 and Mari 25, both found themselves working in the same area in Massachusetts. Mari was hired as the education adviser to the former Massachusetts Governor Michael Dukakis, while James was working for Middlesex Community College, which had secured an appropriation for the construction of two new campuses, according to James.

“As fate would have it, (Mari) came out the week before to talk through the event through which the governor would announce the appropriate, and I took great interest in the education adviser for the governor,” James said.

There was mutual attraction when the two met to discuss the event, according to Mari.

“I enjoyed talking to you on the phone, and then when I walked in, I thought you were adorable,” Mari said.

Although James said he liked Mari once he met her, he and his colleagues had originally decided to humor her since she was a state employee who may have tried to control the event too much. Once they met, however, James joked that he realized he should spend more time discussing the event with Mari.

At the event, James asked Mari to accompany him to the reception, but Dukakis had already asked Mari to ride with him in his car, so they could review information on the way back to the Massachusetts State House.

“(Dukakis) used to always say ‘Oh, I got them together,’ but I’m like no, ‘You almost didn’t. You almost wrecked it,’” Mari said.

At another event where Mari was working, she met the president of Middlesex Community College, who told her James had gone to the College of the Holy Cross, which, according to Mari, gave her an excuse to call him the next day.

During their second date, Mari, who had played backyard and intramural football, made an impression on James, he said.

“The second date, I took (Mari) for a picnic, and (she) had made a picnic basket and put it in the trunk of my little old beat-up car,” James said. “When I opened the trunk to get the picnic basket, there was a football in my trunk. She picked it up and threw me a perfect spiral, and I thought that was pretty cool too.”

The dedication to sports and athletic competition has continued throughout their relationship, according to the couple’s kids, Franki and James Mullen.

“My mom, if you ask her, she’ll show you all of her football trophies and joke that my dad only has golf trophies,” James Mullen said. “It’s funny to watch them be competitive, whether it’s basketball, golf or board games.”

When the two began dating, Mari said neither of them wanted to get married, a feeling that changed throughout their relationship. Mari moved to San Francisco for about a year and a half, and while she worked there, she realized that if she and James were to get married, they needed to be in the same place to make the decision. About one year after Mari moved away from San Francisco, the couple married Aug. 5, 1994, after five years of dating.

“I knew pretty early on that this was somebody very special,” James said.

After they married, Mari worked in public relations and public affairs when James was given the opportunity to move into a higher position of college administration. Even though the opportunity meant she would have to pause her own career, Mari immediately told him to take the job, James said.

“When I became a college president with two small kids, I was travelling a lot and had a lot of long days,” James said. “Mari committed herself to raising two small kids. I owe her a lot for that.”

James often had to travel for work, but both he and Mari were present as their kids grew up, according to James Mullen.

“My dad was always present as much as he could be, but obviously he had to travel a lot,” James Mullen said. “But my mom was always there for us. She was the one who always coached us as kids, was always up early making pancakes (when we had sleepovers), making our lunch for school. But my dad also did a great job with balancing. He was always at everything he could be at. He and I would go golfing, and we’d just take a couple hours just the two of us. He finds it really important just to find those times to spend with us.”

Franki agreed James balanced his work obligations with his home life well, as one of her favorite memories is when she and her family took a vacation to Disney World.

“My dad is a child at heart, and he loves tourist things, so when we lived in North Carolina, we went to Florida a lot,” Franki said. “We got to go to Disney a few times, and definitely going to Disney was peak childhood. My parents were so into it.”

The number of dinners and events James had to attend only succeeded in bringing the family closer together, even when Franki and James Mullen were young children, Franki said.

“It was a different childhood than most have,” Franki said. “As far as I can remember, I’ve been going to the dinners and stuff. I got to meet a lot of people, and my parents are really cool about it. They always made James (Mullen) and me feel very involved in whatever they were doing. It was different, but it was also very cool.”

Mari said she never considered it a sacrifice to tell James to pursue a career in college administration — instead, it gave her the opportunity to work with more groups of people. Her current work includes a position on the management team for Special Olympics and the board for Women’s Services in Crawford County, where she helps fundraise for the organization and write a grant for a new shelter.

“What we do has afforded me a lot of things that I wouldn’t be able to do,” Mari said. “The connection with Allegheny has given me an opportunity to work in Women’s Services. I coach kids all the way up through middle school. It has been a real joy for me, and I never would have been able to make that connection.”

James’ relationship with Mari has allowed him to share in someone else’s experiences, to feel the magic of their marriage, James said.

“I’m tremendously proud of what Mari does for Special Olympics, for what she’s done for Women’s Services,” James said. “She gets great joy out of being part of the campus and interacting with students. I know the first phone call I make, whether it’s good new or bad news, is to Mari, and when I need advice, the advice I trust the most is Mari’s.”

By watching his parents as he grew up, James Mullen learned what loving someone really means, and he said their love is shown through their actions.

“My mom has always been going to all these Allegheny events that she doesn’t individually get paid for, but she knows how much it means for my dad to be there,” James Mullen said. “She’ll go on trips across country when it’s not of the easiest convenience for her, and then my dad will back it up by going to my mom’s basketball games. He’ll go to her practices. They’re so busy, but they always find time to show up and represent their other half.”

Both Franki and James Mullen said their parents are best friends, and while their relationship is not perfect, they show enduring support and love for each other.

“What my parents have taught me through any kind of love is that it’s not always what you see in the movies,” Franki said. “My parents are very different … but they love each other anyway. Whatever differences people may have, you can still love each other. That’s definitely something they’ve taught me.”

To James Mullen, his parents have not only found help in each other over the past decade. Allegheny, he said, has given his family great support.

“Allegheny has meant so much to (my parents),” James Mullen said. “They love all the students. You’re great to them, and I want to say thank you to the Allegheny community for always being there for them and embracing us all these years.”

As James prepares to retire at the end of Allegheny’s 2018-19 academic year, he and Mari are looking forward to the next step in their lives, especially since they will be taking that step together.