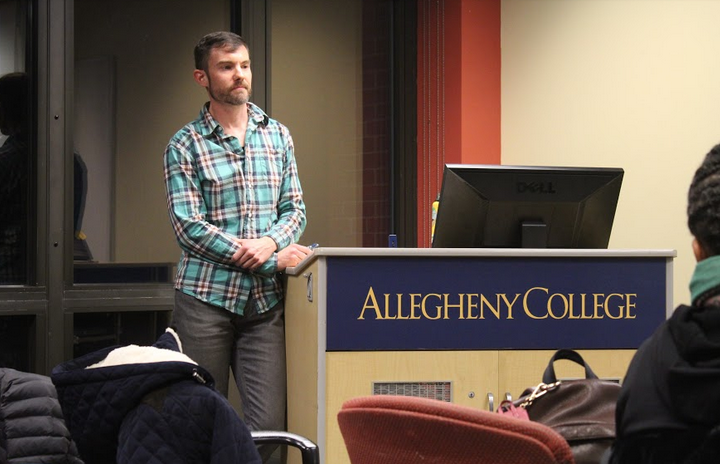 Haywood began the lecture by citing the recent Intergovernmental Panel on Climate Change climate change report as well as the current pace and scale of environmental change as it relates to social and economic systems. He said these are complex and challenging issues that require unique solutions.

“What this necessitates from us as a society,” Haywood said, “is to think about how we develop an informed and engaged citizenry that is scientifically and ecologically literate.”

Haywood defined scientific literacy as basic content knowledge, such as knowing one of Newton’s laws or knowing diseases are caused by germs.

Haywood related scientific literacy to ecological literacy, a similar yet more specialized term which refers to one’s ability to understand basic principles of ecosystems and the application of that knowledge to create more sustainable human communities.

“The value of (both ecological and scientific literacy) is that you have a basic knowledge and you’re able to apply it,” Haywood said. “In order to (apply scientific knowledge), we have to be able to understand and recognize content within context. I can tell you what the theory of relativity is, but if I have a ball in front of me and I drop it, and you’re not able to recognize that that relates to the theory of gravity, then that content knowledge doesn’t really do a lot of good.”

Research suggests, Haywood said, very few Americans, only about 20 to 25 percent of the public are able to apply scientific and ecological literacy, adding that this statistic has not improved since 2008.

“We’ve had a lot of emphasis over the past decade on education about science and the environment,” Haywood said. “Yet our numbers still show that most people cannot and aren’t able to recognize basic science concepts and apply (those) to make useful decisions.”

Haywood argued the reason for this missing link between concepts and applications are due to a societal emphasis on knowledge itself. He argues that, while important, simply knowing a concept does not generate action.

“The assumption is, if someone knows something, they’re going to do something with that,” Haywood said. “It’s true that education is very important, but that is not the only important aspect if we actually want people to be able to apply that information to solve real-world problems.”

Haywood said social science literature shows people need to perceive science to be valuable and accurate in order for them to want to act on it. It also has to be personally relevant and people want to know that their actions can bring about change.

“It’s not just what an individual brings to the table in terms of their emotional or mental state, it’s also the culture through which they filter that information,” Haywood said. “It’s also the social interactions with which they engage, the technology that impacts us and the physical environment itself. The learning context matters in regards to what an individual absorbs and how they process and use that information.”

Citizen science happens when average citizens, people who are not professionally trained, engage in data collection and analysis of natural phenomena.

“I think that citizen science is really uniquely positioned to connect places of (importance) to experiential science and ecological learning,” Haywood said. “And that allows for opportunities for personal action because of that relationship.”

Haywood has worked with and researched the Coastal Observation and Seabird Survey Team, an organization based out of the University of Washington of about 800 COASSTers who canvas beaches on the west coast, from Alaska to California, for dead birds.

The birds are identified and logged a few times each month, and COASST uses this information to keep track of the health and population of different birds.

“You try to identify those birds and you try to determine if there are any factors that may have contributed to their mortality,” Haywood said. “So, you’re really intimate with these dead birds once you’re out there on the coast. Over time, (we’ve been able) to get a strong sense of the baseline cycle of these groups of birds.”

This data, spread out over the 20 years of COASST’s existence, has given Haywood a strong sense of the relationship between the volunteers, the beach sites and the learning that has taken place.

“I’ve looked particularly at some of the program data,” Haywood said. “There’s thousands and thousands of carcass identifications. Each one of these carcasses is verified at the University of Washington … you can (also) look at whether or not a person increases their ability to identify birds over time.”

Haywood’s future research will focus on the relationship between attachments to sites and learning. He has found that, with time, some COASSTers are able to predict bird populations at various times of the year.

Haywood has conducted surveys and interviews on COASSTers prior to their training and during their canvassing tenure, and he has found, surprisingly, that a large percentage of individuals feel attached to the beaches through the program due to repetitive engagement and new, memorable experiences.

“That comes with a sense of possession or a sense of responsibility or stewardship,” Haywood said. “In fact, most folks use the terminology ‘my beach,’ and it increases very substantially over the first year (of canvassing).”

Catalysts for this sense of attachment, Haywood said, include a sense of belonging, social connections and new memorable experiences. The attachment or possessiveness matters because 60 percent of COASST volunteers say that the process of identifying birds is directly linked to feelings of conservation, stewardship or protection of “their” beach.

“What (COASSTers) are saying,” Haywood said, “is that ‘my activity of collecting data …  is a form of civic action in a place that’s important to me.’ ”

In fact, many COASSTers engage in more civic action outside of canvassing. Nearly 80 percent of volunteers remove trash from their beaches, 98 percent talk about their work with friends and family and 20 percent communicate with elected officials and resource managers about environmental problems.

One attendee Cole Grannan, ’20, said he enjoyed the lecture, noting that he “didn’t realize how impactful citizen science was, (particularly) from the citizen side.”

“Citizen science allows for organic, experiential, free-choice explanation of science and ecology within culturally and socially relevant settings,” Haywood said. “Historically, we’ve not done a great job of including historically underrepresented and minority groups. If we think about finding ways to make the learning about science and ecology more culturally and socially relevant for all kinds of groups of people, I think that can have some important implications for how we might broaden participation in science as a whole.”

One question arose about citizen science on campus, and Haywood spoke about the Creek Connections program, where local and regional high school and middle school students monitor water quality as well as the E-Bird program, which Haywood utilized in one of his classes to identify local birds and enter them into a national database.

Allyson Wood, ’19, participated in the E-Bird program with Haywood in the past.

“I thought that it was really cool that all of the individual volunteers working on it could contribute to this big database that anyone could use for free,” Wood said. “It made the bird surveying and identifying we do a little more meaningful.”