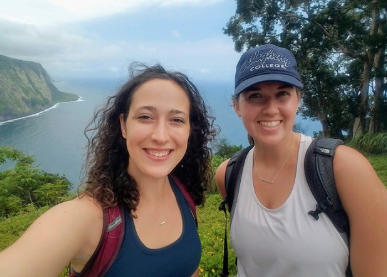 Julia Drozdowsky, ’19, and Britney Imel, ’19, interned at the West Hawaii Health Center in Hawaii during the summer of 2018.

Brought together by one shared bond, Allegheny alumni serve as a resource for opportunities and connections. This vast alumni network is what brought Brittany Imel, ’19, and  Julia Drozdowsky, ’19, to Hawaii during the 2018 summer.

Together, Imel and Drozdowsky interned at a community health center in western Hawaii.

Alumnus Richard Taaffe, ’72, the CEO of the West Hawaii Health Center offered the internship to Allegheny students for the first time last year.

The West Hawaii Health Center has five locations — all are dedicated to making health services accessible to all and promoting community wellness. The health center practices malama pono, which means caring for others in the right way.

Taaffe visited campus during the 2017 fall semester in order to find students who would be a good fit to intern at the West Hawaii Health Center.

“When I initially interviewed, I just wanted to talk to (Taaffe), and it turned into so much more than I could’ve ever imagined,” Drozdowsky said.

Drozdowsky said she was interested in meeting Taffe because she wanted to learn about his journey and how he reached his position at the West Hawaii Health Center.

Taaffe held a luncheon on campus with interviews following. All students interested in global health studies and biology were encouraged to submit a resume and personal statement to the Allegheny Gateway staff. According to Drozdowsky, about 20 students who took advantage of the opportunity were invited to the luncheon.

Taaffe then narrowed the number down to six students. These students were contacted and completed a second interview over Skype with Taaffe and another employee of the health center.

Drozdowsky received an email inviting her to engage in a Skype interview while she was studying abroad in Lancaster, England, during the 2018 spring semester.

“I did a Skype interview with them while I was over there and then a couple weeks later, found out that I got (the internship),” Drozdowsky said.

Both Imel and Drozdowsky’s internships focused on community outreach and health education.

“We tried to tailor the work to the interests of Julia and Brittany, as well as give them a variety of experiences,” Taaffe said.

“We shadowed some doctors and we went to a lot of community meetings, organizing health directives (West Hawaii Health Center) were planning so that we could get a bigger picture of their long term plans,” said Drozdowsky, “but we mostly worked with the Marshallese community in Hawaii.”

The Marshall Islands is a group of five islands spread throughout the North Pacific Ocean. The islands are approximately 2,000 miles from the coast of Australia and have a population of roughly 60,000.

According to a 2010 census, only 22,434 people of Marshallese descent live within the United States, mainly in Hawaii and Arkansas.

“The Marshallese women were very accepting of us,” Imel said. “They aren’t really normally big fans of people from the mainland, but they accepted Julia and me right away.”

Traveling to Hawaii, allowed the women to learn more about the community members’ struggles and needs.

“We learned a lot about the Hawaiian community and what barriers they face and how we can address them,” said Drozdowsky. “We organized community needs assessments and things like that.”

Imel and Drozdowsky both focused on becoming involved with the community and implemented a variety of different community health initiatives, such as Zumba classes and a competition resembling “The Biggest Loser.”

“We got immersed with the community. We were in it, living in it, working in the community and you can see how a lot of the resorts there are these little inlets of seclusion and a lot of people who are tourist there don’t actually get to know the community,” Drozdowsky said.

Both Drozdowsky and Imel think this experience was worthwhile and suggest other students take advantage of this opportunity in the future.

“If this experience was made possible again, I would definitely recommend it to other students or ones like it, if Allegheny can make connections to other alumnae,” Drozdowsky said.

The Hawaii experience is sure to help both women in their careers after graduation from Allegheny, Imel said.

“I think the biggest thing, especially for my career in the future, is to listen to people and not assume,” Imel said. “Especially going from a better neighborhood to one that maybe doesn’t have a lot, to not go in there to try to fix it, but to go in there and listen and ask what community members want, what they need from us, and not going in with the answers, not just what we want them to have.”