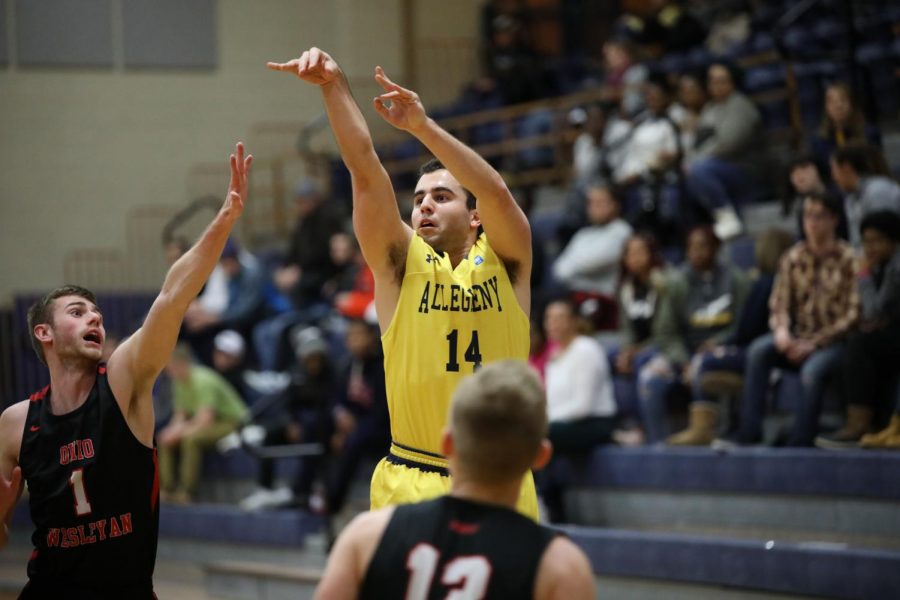 Contributed by Sean KingBilly Urso, ‘19, watches the ball after shooting in a game against Ohio Wesleyan as Tristan Tillman, ‘20, leaps to block him. Urso has been called a “second head coach” by his teammates.

Allegheny men’s basketball is looking to capitalize on the talent of the first-year class and upperclassmen experience to improve its 7-11 record in the 2018-19 season.

Head Men’s Basketball Coach Bob Simmons attributed some early season struggles, including a particularly close 71-77 loss to Ohio Wesleyan College, to adjusting to the rigor of the college athletics environment.

“We knew that as we recruited them that it was a very talented group of guys coming in and it was just going to take a little bit of time to get acclimated to the college game,” Simmons said. “I think our upperclassmen have a big hand in their success.”

The lessons taught to the younger players by the upperclassmen have paid off in recent games, according to Simmons. The Gators won three games in January, starting off the new year with a 66-57 win against Kenyon College.

“Our first conference win at Kenyon on a Saturday afternoon in January was a long day for us,” Simmons said. “Handling that and being ready to go mentally as well as physically, winning that (game) to get us off on the right foot was really great.”

After a Jan. 9 loss to Hiram College, the Gators brought home victory again with a 98-95 victory over Dennison at home.

“Our guys were really on that day offensively,” Simmons said. “They saw the rewards from that.”

The “little win streak” continued with a win on the road against Oberlin College. The Gators took home their first double-digit conference win in an 83-66 game.

“They were active and aggressive which led to some easy offense for us,” Simmons said. “We really controlled the game from start to finish. At one point in the second half, we held them to seven points in seven minutes, which was a great defensive effort.”

“We’re playing a lot of freshmen, and I think the freshmen recruiting class has helped us a lot,” Rawls said. “They’re getting experience, and we’re kind of throwing them to the wolves the same way (Simmons) did with my junior class, so that’s kind of nice to help them and watch them develop.”

Caden Hinckley, ’22, said his first basketball practice at Allegheny was like being hit by a wall because so much information was thrown at him.

“Throughout the season, it’s becoming easier and easier and I think that’s part of why we’re on this little win streak is because the freshmen (have) finally got a hang of how we have to play and how we have to practice day in and day out,” Hinckley said.

Hinckley and Rawls highlighted the success of several teammates, including freshman point guard Brian Roberts Jr., who has scored 276 points thus far in his first season at Allegheny.

Billy Urso, ’19, is one of the upperclassmen helping to make Roberts’ and other first-years’ success possible, according to Hinckley.

“He is kind of like a second head coach,” Hinckley said. “If we make a mistake during practice or in a game, (Urso)’s always the first one correcting us or telling us what we need to do to fix that so it doesn’t happen again.”

Hinckley said the playoffs are particularly close to Urso’s heart.

“(With) every win we creep closer to getting our own home playoff game,” Hinckley said.

Having enough success to get a home playoff game is an important goal for the Gators, who want to improve upon previous seasons.

“We haven’t been in the playoff run in the last couple of years,” Rawls said. “That’s basically the primary goal. Win games, get to the playoffs, make a run in the NCAC Championship.”

Allegheny’s 2-16 conference record places them in eighth place within the eight-team NCAC conference. Simmons is focused on his team’s improvement and successes.

“Their mindset was a little different this year,” Simmons said. “They weren’t happy with the way last year went, the upperclassmen. They wanted to fix that. They knew the only way to fix that was to work and be prepared.”

Simmons said three days of lifting in the off-season and six days a week total has paid off for each and every one of his players. Most importantly, according to Simmons, the team culture has been ready-made to cultivate success for upperclassmen and first-years alike.

“Our upperclassmen welcomed them, have taken them under their wing not just off the court, but on the court, and I really give a lot of credit to our upperclassmen bringing them along and showing them how we do things as a member of the Allegheny men’s basketball family on and off the court,” Simmons said. “Our freshmen are extremely talented, which is great, and they’re going to keep getting better.”