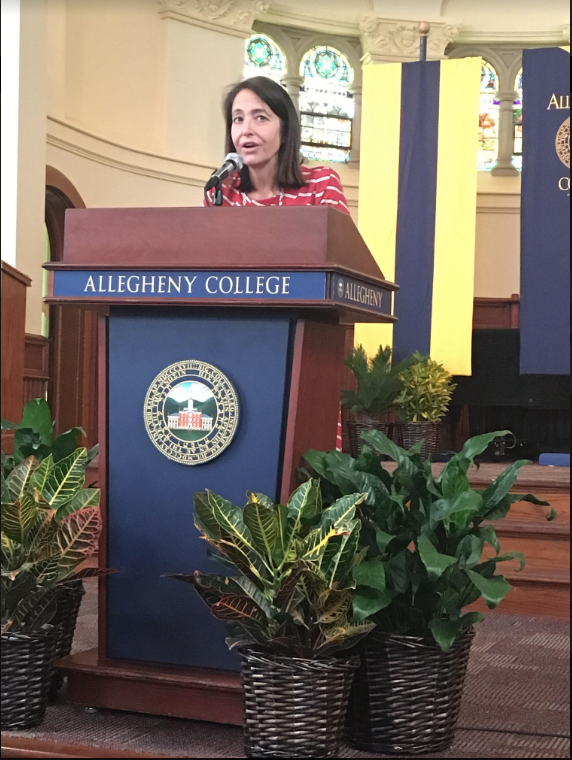 President-elect Hilary Link and her family were welcomed to the Allegheny community on Jan. 22, with a nearly-full ceremony at Ford Memorial Chapel.

The ceremony was held one week after the Board of Trustees announced the decision to elect Link as the 22nd president of Allegheny College.

President James Mullen welcomed the audience and was preceded by a standing ovation for his 11 years of service.

Mullen began by calling it a historic day for the college, noting that a president has been selected just 22 times in two centuries.

“I daresay that none of those occasions,” Mullen said, “have been filled with greater anticipation or a greater sense of the possible.”

On behalf of his family, Mullen welcomed the president-elect to the community.

“Mari, James, Franki and I join the entire community in saying we are proud and tremendously excited to welcome (Link) as our president,” Mullen said.

Mullen recalled the start of his own presidency in 2008 and reflected on the warmth he initially felt from the Allegheny and Meadville community.

“As I walked over to Ford (Memorial) Chapel (today),” Mullen said, “I could not help but think back to that moment 11 years ago when this community so warmly and genuinely welcomed the Mullen family to Allegheny and to Meadville. That genuineness of spirit, that warmth, grounded in a deep and shared commitment to our mission to residential liberal arts education that continued for more than a decade. And we will be, forever, grateful.”

Mullen wished the same gratitude he has received from the community to the president-elect and her family.

“Hilary, Jeff and Jason: I know that you and Alex and Zach will experience just the same support, encouragement and kindness that our family has enjoyed during our time in Meadville.”

Mullen proceeded to thank the search committee, praising it as “the truest and best” of what Allegheny represents.

“No college in the nation,” Mullen said, “has a more supportive, engaged and committed board of trustees than Allegheny.”

Mullen also thanked Mark Campbell, ’82, Board of Trustees chair, for his leadership and welcomed him to speak.

Campbell then fondly remembered his freshman year at Allegheny, nearly 40 years ago.

“I settled into Edward’s Hall a bit nervous and apprehensive,” Campbell said, “but what I experienced were some of the greatest years of my life.”

Campbell emphasized the Allegheny family that he became a part of, and talked about the support that he still receives from it.

“For this Allegheny family, this is a great day,” Campbell said, “a day in which we welcome new members to our family.”

Campbell thanked the Mullen family and emphasized Mullen’s key accomplishments, including the college’s Prize for Civility in Public Life and the capital campaign which has raised almost $200 million during his presidency.

“But most importantly,” Campbell said, “(Mullen) constantly reminds us in his words and deeds that this is for students. His relationship with each and every student on this campus for the last 12 years has been inspiring to us all.”

Campbell welcomed Link to the podium, noting her accolades and her election marking the first woman to ever hold Allegheny’s highest office, earning a large applause from the audience members.

“We particularly have appreciated the warm reception because it’s not so warm outside,” Link joked, noting she and her family are used to the warmer Mediterranean climate of Rome, where she is currently the dean of Temple University Rome.

Link said that she has been met with an extraordinary welcome from the college. One of the best welcomes, Link said, was a phone call from Mullen himself on the day her election was announced.

Link continued to express that she is honored and excited to become the 22nd president and first woman president of Allegheny College.

“I am thrilled, humbled and honored to have been elected to lead this great institution,” Link said, “which is one of the nation’s oldest and most innovate liberal arts colleges. I am especially honored to be the first woman to take on the presidency of the institution, and I can’t wait to get started.”

Link said that, although she does not yet know many students or faculty members, she feels that she already knows everyone in one particular way.

“You chose Allegheny in one way or another,” Link said to the audience. “It’s truly heartening to come to understand even better the level of love, affection, dedication and commitment that all of you have for this beloved college. It is one of the strengths of this institution and it’s one of the things that will continue to position Allegheny to move forward and to lead into the future”

Link spoke about her passions for the liberal arts, noting that it is essential to solving real-world problems.

“I’m a scholar of the Italian renaissance, Italian art and literature, and I believe fervently in the value of a liberal arts education,” Link said. “The term ‘liberal arts’ came because these were the skills that people needed to be free citizens of the world, and these skills are no more important than right now.”

Link said that the liberal arts are particularly important in today’s global society.

“In such a complex, ambiguous, and ever-more interconnected world,” Link said, “the value of the liberal arts, with their interdisciplinary approach to human expression, human knowledge and ultimately human life itself is stronger than ever before.”

“Interdisciplinarity, as you all know, better than I,” Link said. “is fundamental to an Allegheny education.”

“Interdisciplinarity is a force for change,” Link said. “It gives our students the ability to think critically, to communicate across different boundaries, to work with others who are not from their own backgrounds and ultimately, to solve problems by learning to see things from a variety of different perspectives.”

“We stand to make many missteps at a very critical time,” Link said, stating that the liberal arts are currently under challenge, but she asserted that Allegheny is poised to overcome these challenges.

Link said that she wishes to reinforce and enhance Allegheny’s focus on connections and bring it to a higher national and international status.

“Allegheny’s values, as an accessible institution that creates space for connections, is truly unique and truly something to honor as a distinguishing characteristic,” Link said. “It’s something that I hope to build on as we work to continue to strengthen the profile of the institution nationally and internationally.”

Link said that Allegheny’s unique story — its distinctive curriculum and vibrant community —  is not widely known and needs to be shared on a larger scale.

“I’ve said from the beginning to the search committee, that this college has a great story to tell, and it deserves to be told and recognized more broadly for all of the amazing things it’s doing for the students and for creating thinkers who are going to change the world,” Link said.

Link says she’s inspired by the college’s innovative and interdisciplinary approach and the enthusiasm of its community about learning.

“I am really, truly thrilled to be joining this dynamic time for the college,” Link said, “and I very much look forward to partnering with all of you on moving the college forward and making everything about it better now and to the world around it.”

The ceremony was followed by a performance of “Alma Mater Beatissima” by the Allegheny College Chamber choir and a reception in the Patricia Bush Tippie Alumni Center, where members of the community were able to meet Link.

Robin Scheimer, the college’s director of sports medicine, was among Allegheny faculty at the reception.

“I think it’s a really important opportunity to get face time with the new leader of the college campus as well as, it’s always a great opportunity to speak with the other people who are involved with the campus community” Scheimer said.

“(Link is) from Rome, so I think we’ll definitely get new ideas and perspectives from her, including an international perspective,” Raymond said.