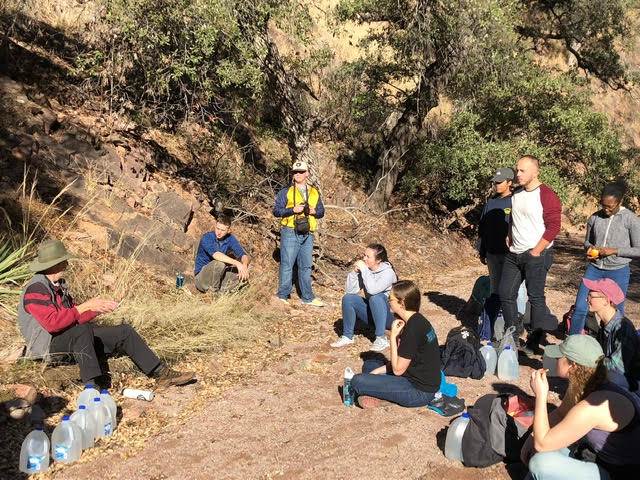 During their visit, the students participated in a desert hike. They walked seven miles to leave food and water for immigrants at the border.

During the 2016 Presidential election, then President-elect Donald Trump committed to building a border wall with Mexico. Trump’s promise is now the reason for an ongoing partial federal shutdown.

“If we don’t (build a wall), this country is going to be worse than at any time in our history in terms of drug infestation and in terms of crime,” Trump said on Jan. 23.

Twelve Allegheny students had the opportunity to visit the border and see the current situation. From Jan. 7 to 12, Allegheny’s Global Citizen Scholars witnessed the situation at the border first-hand.

Global Citizen Scholars is a program that aims to educate students in civic engagement, global learning and United States diversity.

The program and trip were led by professors Laura Reek and Dave Roncolato. Roncolato explained the trip was an idea formulated almost three years ago.

The scholars stayed in Tucson, Arizona, with a program called BorderLinks. BorderLinks is a nonprofit organization in Tucson that focuses on educating about migration and life along the U.S.–Mexico border.

“It was really important to see all of the partnerships that BorderLinks had who were providing great resources for these people,” Spence said.

The Global Citizen Scholars Program is currently organizing an event to discuss some of the major takeaways from their visit.

“I think, in retrospect, we were very lucky to get ourselves scheduled in because right now, especially in terms of education, there’s a high demand,” Reeck told the Meadville Tribune.

President Trump’s promised border wall has resulted in the longest United States government shutdown ever recorded. The wall is a $5.7 billion protection against what Trump insists is a “humanitarian and security crisis.” Currently, the government has been shut down for over four weeks.

However, many democrats strongly oppose the construction of the wall, claiming that it is a waste of taxpayers’ money and a “manufactured crisis.”

During the 2016 election, Trump promised voters a 2,000 mile fence to “protect” the border.

BBC reports that since Trump entered the White House, Congress has approved $1.7 billion in funding for new and replacement barriers along the border. Forty miles of replacement barriers have already been constructed and the rest are assumed to be completed sometime this year.

A survey conducted by the Pew Research Center reports that a 58 percent majority of Americans oppose expanding the barrier, while only 40 percent support the project.

Trump initially demanded his “big, beautiful wall” be made from concrete, but now Trump is suggesting steel so border agents can see threw it.

Prior to the government shutdown, Trump posted a picture on Twitter of a wall constructed from steel slats instead. Trump captioned the photo, “A design of our steel slat barrier which is totally effective while at the same time beautiful.”

In addition, DHS and the Center for Migration Studies report that the number who outstay their visas has been larger than the number who cross the border illegally since 2007. DHS reports that in 2016, 739,478 people outstayed their visas, while only 563,204 people crossed the border illegally. This figure includes the Canadian and coastal borders.

The Cato Institute reports that no one who has crossed the U.S.–Mexico Border from 1975 to 2017 has been responsible for a terrorist attack while in the United States.

However, Trump still considers the border to be a “humanitarian crisis.”

An article published in The Guardian states, “Immigration policy is usually driven by perception much more than it is by reality.”

On their first day at the border, students took part in a seven-mile guided hike. Each student carried two gallons of water with them to leave at the border for those making the dangerous journey.

“As we were walking, we saw personal effects that had been left behind — backpacks, cosmetic products, toothbrushes, toothpaste, socks, shoes — just of the most everyday nature,” Reek said, in an interview with the Meadville Tribune.

The students also had the opportunity to listen to a presentation by the Sierra Club. The presentation discussed environmental concerns surrounding the potential border wall.

“Two-thirds of the border is actually the Rio Grande River. The idea would be building a wall, whether you build it on one shore or the other, is actually a pretty significant environmental hazard, in terms of the flow of water and in terms of animals and preserved land,” Roncolato told the Meadville Tribune.

In addition, the students also visited Nogales, Mexico, a town that is split in two by a wall along the border.

“At one point, I was looking through the wall and the fencing, and I saw an Arizonan Nogales city truck for street cleaning, but on the emblem on the truck there was both the Mexican flag and the U.S. flag,” Reeck said.

The students also also participated in a legal immigration simulation and two students had the opportunity to sit in on a Tucson district court proceeding dealing with Operation Streamline.

Operation Streamline is a policy created by the Departments of Homeland Security and Justice that allows for the criminal prosecution of illegal entrants with misdemeanor charges for first offense and felony charges thereafter.

“I find a lot of hope in college-age students that are willing to engage in the complexity of this, and I have a lot of confidence they can really go out in front of the movement to find effective, humane policies that both protect the United States and also respond to the very serious humanitarian crisis going on,” Roncolato said.