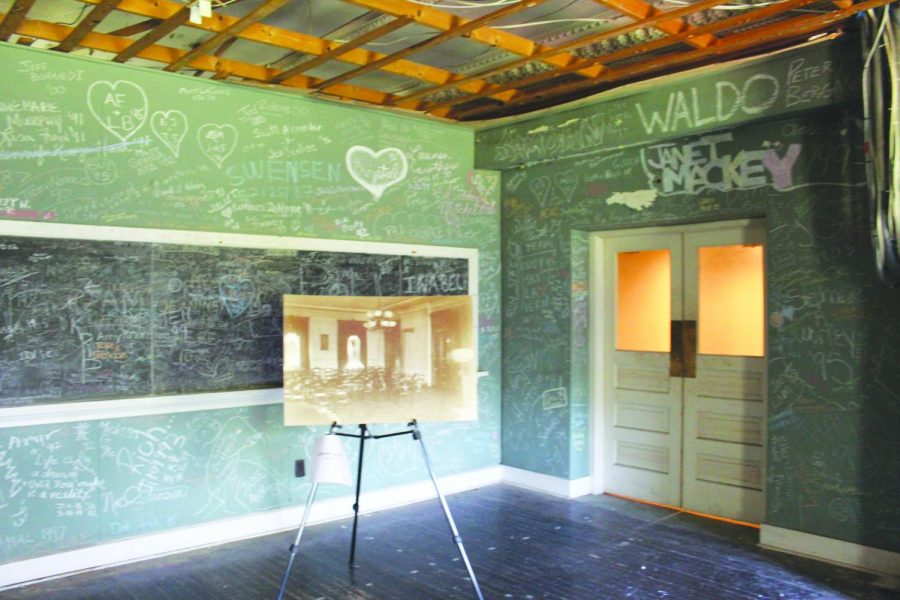 The design stage of renovating Allegheny College’s most illustrious edifice, Bentley Hall, is moving along with a thorough evaluation of the building’s original components to determine what can stay and what must go. These findings will guide the design plan in an attempt to retain the building’s historic charm before construction begins in the $14 million effort to restore and modernize.

“We started with preliminary design and then went to schematic design, and there are two more phases of design after this,” explained Cliff Willis, Allegheny College director of major capital projects. “As we do each phase, the plans and specifications get more detailed.”

The college has been working with architectural firm MacLachlan, Cornelius & Filoni to plan the project, which will focus on recapturing Bentley’s original appearance as much as possible while including key upgrades to optimize functionality.

“I think if we do our job right, there actually shouldn’t be much of an aesthetic difference,” said John Evans, a principal at MCF who focuses on historic preservation. “Bentley is an iconic building, and one of our goals is to accomplish what we can to meet the college’s needs for a central administration building without really changing the exterior appearance.”

On the outside, tests are being conducted on Bentley’s exterior walls to determine whether the red paint covering the building can be removed to return the facade to its original brick. Whether this can be done is going to depend on how much it costs, the challenge being that the building’s chimneys — which were rebuilt in the mid-1980s — would have to be reconstructed with brick from inside the building in order to match the walls, Willis said. If the plan to return Bentley to its original brick turns out to be infeasible, the building will receive a fresh coat of red paint.

On the inside, Willis said selective demolition is being done to expose the building’s structure so it can be examined by architects and engineers. So far, plans have been made to fill in gaps in the foundation stone and waterproof the outside of the foundation to strengthen the foundation and protect it from moisture. This foundation work will be completed in small sections of no more than 20 feet at a time to make sure the foundation’s lateral support is not compromised.

Bentley’s overall structure will likely not need any major repair, as it seems to remain strong.

“One of the biggest concerns of the structural engineer was the condition of the joists where they go into the masonry wall,” Willis said. “They wanted to see if there had been deterioration over the years and there hasn’t, they’re very sound. So if we have to do any replacement it will be minimal.”

The rest of the demolition will include taking down the ceilings to expose the underside of each floor along with limited demolition of interior walls to decide which ones will stay and which will go, Willis said. More detailed and extensive demolition is planned to be done throughout the building starting in February.

The demolition has exposed some surprises hidden inside Bentley’s walls, such as several fireplaces that were filled in when they were replaced with other heat sources for the building. Willis said they hope to expose these fireplaces to provide quaint aesthetic features in some offices, and the only functional fireplace will be in the president’s office. Several chalkboards were also uncovered inside Bentley’s second-floor walls, many of which still have writing on them that is suspected to be from the early 1960s.

Bentley’s third floor, which once housed the fifth-most extensive library in the nation, has been used for storage since 1964 when the city government said it violated fire codes and could not be used unless the college opted to build an exterior stairway.

Before it was abandoned, two literary societies had rooms on the third floor where they competed to have the nicer space, leaving behind decrepit remnants of deluxe features that once contributed to the floor’s decor. One literary society’s design will potentially be recreated, as a picture of one of the old rooms will be used to restore a room on the third floor that will be used as a large conference room, Willis said.

The bottom floor will be redesigned into office space and a new lobby that will make Bentley more accessible by providing easy access from an entrance from Hulings parking lot on the south side of Brooks Hall. To maintain the spirit of tradition, Willis said six panels from Bentley’s famous “chalk room” on the third floor — where students have been writing their names since 1964 — will be removed and framed to be used as decorations in the building’s new ground-floor lobby.

The “chalk room” itself will be made into a seminar room where classes will be taught.

In addition to the new lobby, Willis said the design plans include enhancing Bentley’s accessibility with the installation of an elevator on the bottom floor, making the building fully handicap accessible for the first time ever.

“One of the downsides of existing Bentley is that there are only two existing restrooms, a women’s restroom, and a men’s restroom — that’s it for the whole building,” Willis said. “Now, with the installation of the elevator … next to the elevator shaft will be restrooms on each floor.”

Another convenience in the design plans is the addition of an energy efficient geothermal system that will provide both heat and cold air throughout the building, Willis said. This will be the first time in Bentley’s history where occupants will no longer have to rely on opening windows to have cool air in the building.

Other modernization will include updating the building’s mechanical, electrical and plumbing systems, some portions of which are over 50 years old, Evans said. Other general technological updates are also on the agenda, posing a new challenge for the old building.

“There’s a lot of technology that exists now that didn’t in 1820 or even when the building went through its last renovation,” Evans said. “So figuring out how to route all of that technology through the historic building without major visual impact or destroying historic materials is going to be a big challenge.”

Regarding the flooring, Willis said most of Bentley’s office floors will be covered with new carpet, and some areas — such as the president’s office — will feature the building’s original hardwood floors.

In Bentley’s bell tower, contractors removed 90 cubic yards of cellulose insulation, which they then bagged, advertised on Craigslist and gave away to people who wanted to use it in their houses, Willis said.

Bentley will also be given a new slate roof, replacing the current slate that has been on the building since 1924.

Given that the Bentley renovation project is still in the design stage, the process of analyzing costs has yet to be completed, so it is too soon to tell how all the design plans will fit into the project’s $14 million budget, which was entirely funded by donors.

Patricia Bush Tippie, ’56, and Henry Tippie are providing half of the funds with a $7 million challenge pledge, which means the college is responsible for raising the other half of the funds. The college has currently raised $6.5 million and is still fundraising for the remaining $500,000.

“Now we’re just working to finalize all the different elements of and refining the process of the design,” Evans said. “We intend to go into construction fairly soon … in May after graduation, construction on the building is going to start in earnest.”