Mullen reflects on time at Allegheny 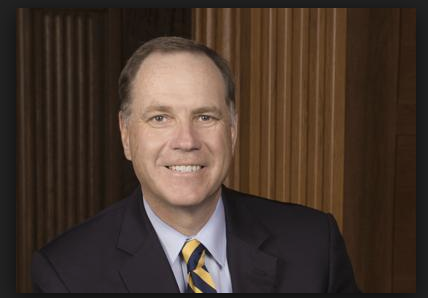 President James Mullen has been a familiar face for students and faculty alike over his 11 years as president of Allegheny College, but now it has come to his last semester before retirement.

Mullen has held the presidential position since July 2008. Over the last 11 years, Mullen said he has been instrumental in changes to the college and is grateful to be a member of the Allegheny and Meadville communities.

“I have been fortunate to be a part of a wonderful community that has collaborated on a range of initiatives to strengthen Allegheny,” Mullen said. “I think things that we can all feel positively about include that we are a much more diverse campus than other times in our history. … The Allegheny College Prize for Civility in Public Life has earned the college tremendous national attention.”

Mullen described other changes and initiatives he has been involved in during his presidency, including the new business majors, the comprehensive campaign and scholarships, and the recent renovation of Bentley Hall.

“But those have been community efforts, not just me,” Mullen said.

While Mullen has made contributions to different projects over his time as president, his personality and demeanor are what faculty and staff close to Mullen, including Pamela Higham, assistant to the president, will remember the most.

“Working for President Mullen the last nine years has inspired me in so many ways,” Higham said. “The complexities of his position are enormous, yet he always finds time to listen to anyone who has a problem or suggestion — or just wants to say hello. His leadership is founded in care and concern. I’m sure he’ll go on to still make a difference in the lives of many. I will miss him, Mari, Franki and James dearly.”

The one thing that everyone on campus knows about Mullen is that he does not have to know a person’s name and he will say hello to them.

“The relationship (I get to have) with students has been the most important and joyous part of being president of Allegheny,” Mullen said. “I know you’ve all heard me say that I love you all, and I truly do. You are a source of great happiness for me, and I’m so very proud of you. I’m remarkably grateful for what you all mean in my life.”

Provost and Dean of the College Ron Cole has seen the care Mullen has for the students and the Allegheny community as a whole.

“President Mullen is energized by our students and the hope that they represent, placing them at the center of his presidency,” Cole said. “He cares deeply for Allegheny and the broader Meadville community and it’s been my privilege to learn from him and serve under his leadership.”

Mullen described the one major thing he would like to do before he retires in July is to spend as much time with students as he can. He also plans on helping with Link’s transition so it can be as smooth as possible for her and the community.

Mullen had good impressions of Link, and got to meet her during the election process, even though he was not a major part of the process.

“I am so excited about our new president,” Mullen said. “She is a tremendous scholar, committed deeply to the liberal arts … a great listener, has great energy, and we are very, very lucky to have her as president. And I’m very excited that she will be my president.”

Mullen described how great and exciting he thought it was to have the first woman president of the college. He hoped it would reinforce to incoming students that Allegheny “is a community committed to diversity and inclusion.”

“I think it is once again Allegheny stepping forward, and living the best of its values,” Mullen said.

Upon Mullen’s retirement, the Mullen family plans to move to Asheville, North Carolina to reflect on their next steps in life.

“You know I’ve been a college president for 20 years, that’s one-third of my life,” Mullen said. “Mari and I are looking forward to the chance to step back and reflect on our next steps. I might also do some writing, and I would like to continue to support Allegheny and Dr. Link as she arrives.”

Above everything else, Mullen wants students to know how grateful he has been to be their Allegheny president.

“I hope they will remember how grateful I have always been for them, and how they have inspired me,” Mullen said. “I hope they know that they have made me not only a better president but a better person, and I am eternally grateful to you all, and for what you mean in my life. And even though I won’t be here, I hope students from the past 11 years will stay in touch with me, and continue to share with me what’s happening in their lives. And if you’re coming through Asheville, North Carolina, I hope you all visit.”