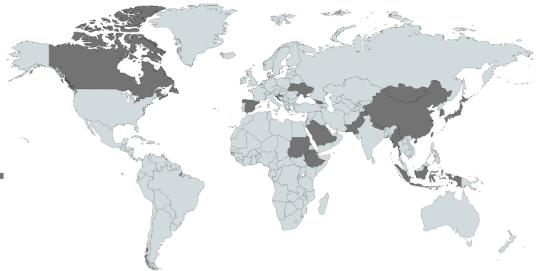 Together, these 28 students represent 17 countries, with nine from China, three from South Korea, two from Canada and 15 individuals from other nations around the world.

“The very first thing that I noticed was that everyone was smiling,” said Teona Bagashvili, ’22. “That’s something that doesn’t happen in Georgia.”

An international student from Tbilisi, Georgia, Bagashvili said she remembers how welcomed she felt the day she first arrived at Allegheny to move in, which was also the first time she had been to the United States.

Bagashvili, who is thinking about majoring in physics, applied to other colleges in the United States, as well as schools in Germany and England, and said she decided to come to Allegheny because of the programs and internship opportunities it offers and because of the close connections students develop with faculty.

“When college’s focus on diversity, I think racial diversity is probably the first thing that comes to mind, but I think it’s so important to have people who are location-wise from a different place,” said Gabrielle Dorsey, president of the class of 2022. “As a part of people’s college experience, it’s healthy to be around people who are from a different place, who have different opinions, different views on issues because you have to be challenged and you have to be uncomfortable at times, and being around students who are from the international community will definitely introduce that aspect into classrooms at Allegheny.”

Dorsey, who is from Akron, Ohio, said she became involved with Allegheny Student Government as class president to connect with her class and the Allegheny student body and “have a bigger hand” in campus changes and campus life.

Dorsey also serves on two Allegheny Student Government committees — one that focuses on policy change for how the college handles discrimination based on race, sexuality, gender identity and religion, and a committee that aims to work toward changing academic policy that would allow the college to accept more than 32 credits from incoming first-years.

As a representative for the class of 2022, Dorsey said she hopes to work with the college to offer more ways to connect international and domestic students through peer mentoring programs.

The Culture 2 Culture Peer Mentoring Program, organized by the International Education Office, pairs incoming international students with current Allegheny students, and Bagashvili said through the program she has been able to get to know the campus and better understand other cultures — American and international cultures.

“I’ve gotten to know people from all over the world, from South Korea, from Japan, from Pakistan, from India,” Bagashvili said. “It’s very exciting because I have learned a lot from them, from their perspective and about their cultures and that is very important for me.”

The recruitment process for the class of 2022 began in August 2017, around the time the recruitment travel schedule is typically organized each year for the Allegheny College Office of Admissions, according to Chris Segur, senior assistant director of admissions and coordinator of international recruitment.

“One of the best ways to really enhance education is to ensure that we have different students coming from different parts of the world bringing different perspectives, different experiences, and I think that ultimately translates to a more impactful and enriching experience inside the classroom,” Segur said.

The Institute of International Education’s Open Doors research program has administered enrollment surveys to higher education institutions in the United States since 2005, and its annual reports are released each November. The IIE, which seeks to promote the importance of international education, found in its initial survey results that U.S. higher education institutions experienced a 1.5 percent decline in new international enrollment from fall 2017 to fall 2018.

While the admissions office at Allegheny establishes its own recruitment goals each year, Segur said he also sets personal goals for diversifying the student body through international recruitment.

A typical goal for new international enrollment, according to Segur, is to at least meet the number of international students in previous classes, but he hopes to push those numbers further.

With the recruitment process underway for the class of 2023, Segur said he would like to meet or exceed the number of international students represented in the class of 2022 for next year’s incoming first-years. As for whether long-term growth in international representation is of interest to Segur, he said, “That’s a very strong yes.”

Segur recalled attending a recent admissions conference in Salt Lake City, Utah, and described being in a room of about 30 people where a conference organizer asked attendees representing different colleges and universities to raise their hands if they saw growth in their international student populations for this year.

Segur’s hand was raised, and he said he remembered about five other people raising their hands.

“Being one of those hands that can say, ‘wow, we stayed the same, or we grew,’ is an accomplishment,” Segur said.

“I’m very proud to be here, especially considering there hasn’t been a Georgian student (at Allegheny) for a very long time,” Bagashvili said. “I really do feel proud.”