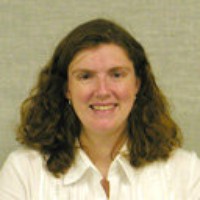 Amidst the talk of civic duty that filled Allegheny College’s campus during the midterm elections, the college expanded its scientific knowledge in another installment of Allegheny’s Faculty Lecture series. Allegheny’s community was invited to Assistant Professor of Physics Adele Poyner’s lecture “How salty water meets a hydrophobic surface” in the Henderson Campus Center at 7 p.m. on Wednesday, Nov. 7.

Opening her talk with examples of common hydrophobic surfaces, Poyner described various surfaces. One of the most recognizable surfaces is a waxy coating on grass that contributes to dew formation. Water does not stick to the coating, but instead forms a spherical droplet on the grass. Stain resistant clothing and car wax both work on this principle.

“So this is something that’s not just an everyday experience, it’s in every aspect of life,” Poynor said.

“So anything where the water really wants to ball up, is a hydrophobic surface,” Poynor said.

At the molecular level, the sphere is created as the hydrogen atoms in the water molecule are attracted to the oxygen atoms, creating a hydrogen bonding network. As such connections cannot form with the hydrophobic surface, the network remains confined to the sphere.

Poynor’s work looks at what happens when the hydrophobic surface is forced into contact with water.

“I like to say, you know, you wax your car, it rains, and the water balls up,” Poynor said. “You wax your car and throw it into Lake Erie — Lake Erie is not going to ball up.”

Poynor said other studies previously done by scientists have hypothesized the water would flow around surfaces as small as the water itself. The reaction is a bit different when the surface is much larger than the drop itself, though.

“In this case, the whole water molecule is going to pull away,” Poynor said. “But not an amount that you can actually see, but just a really small amount.”

Specifically, the area between the water droplet and the surface is about the size of one ten-billionth of a human hair. Because of how small it is, researchers such as Poynor must use special tools to study it.

“How are we going to see something that’s so tiny?” Poynor asked. “It’s below a nanometer.”

“Okay, so we want to continue this work, we want to do a larger range of contact angles, and we don’t want to spend a couple billion dollars to build a linear accelerator,” Poynor said.

Poynor’s current research revolves around determining how the contact angle of the droplet impacts the measurement of the layer of space between the droplet and the surface.

“So we want something that can be small, that can be put on a table, that students can go and do and not have to be afraid of getting irradiated,” Poynor said.

To conduct the plasmon resonance research, Poynor uses gold slides coated in a layer of organothiols, a chemical that creates a hydrophobic surface.

“It’s really nice because you can mix two different kinds of organothiols, mix them together, and get a different range of contact angles,” Poynor said.

Poynor decided after working on her research for six years to look at how using salt water changed the results. Previously, she had just focused on fresh water, but realized natural processes rarely used water which is completely fresh.

“I was talking to some biologists about this, and they’re like ‘you know, pretty much nothing inside the body is actually in water’,” Poynor said. “And I’m like, ‘what, 70 percent of my body is made up of water.’ And they’re like, ‘it’s not just water.’”

For instance, the salt in the water would change the way the water sticks to itself. Thus, Poynor’s results, while accurate for laboratory conditions, would be inconsistent with real world situations.

When Poynor tried using salt in her apparatus, the salt ate away at the hydrophobic surface and formed crystals on it. Thus, she is now trying to find a reliable way to test salt water in her apparatus.

“Right now, we just need to focus on finding some kind of combination of surface and salt water that doesn’t fall all to pieces,” Poynor said.

During a question-and-answer session after her formal presentation, Poynor discussed how her work held real-world applications, such as making it easier for water to flow through pipes more efficiently. Joanne Hartung, an attendee of the talk found this part interesting.

“Just in general, with movement of fluids either through a pipe or through your body, arteries, et cetera,” Hartung said.

Margaret Nelson, associate professor of biology and biochemistry, said she was impressed by how easily Poynor talked about her complicated research subject in a very clear way.

“As a biologist, it was interesting to think about some of the implications for biology,” Nelson said.