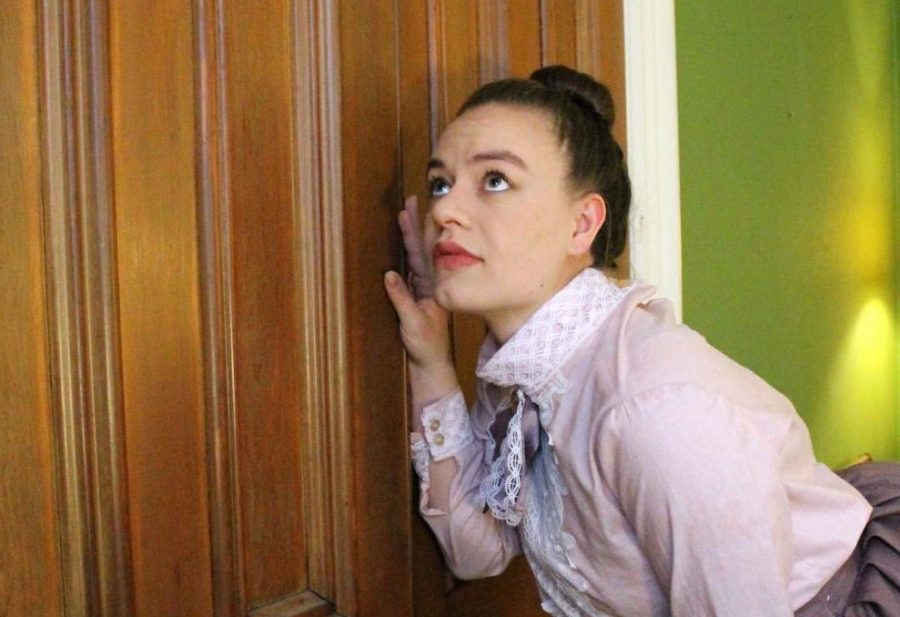 Catherine Givings (Emily Wilson, '19) tries to hear what is going on in the next room.

Diseases ran rampant in America during the Victorian era, with cholera, influenza and smallpox claiming millions of lives. But another, less harmful and more ambiguous disease was thought to affect the majority of women in the United States: Hysteria.

“(There was) this notion of the wandering womb,” said Jennifer Hellwarth, professor of English. “In the Middle Ages, there was this concept that the womb (would) literally wander around the body, and need to kind of be anchored.”

“What is a woman that is free and can do what she wants?” Crozier asked.

The role of American women in the 19th century and today is examined through the play’s provocative and amusing plot.

The story follows Catherine Givings, the wife of a doctor who treats women and men for hysteria. A workaholic, Dr. Givings is emotionally detached from his wife, as he spends most of his time in the office, referred to as the next room.

“(Catherine’s) very curious about what goes on in that room, in the next room,” Crozier said. “(The Characters) are always going back and forth between these two rooms. … The first two people we meet, after these two, are the Daldrys, who are there to seek treatment.”

Sabrina Daldry is depressed, a common symptom of hysteria, and is treated by Dr. Givings.

“In the meantime, almost everybody in the play starts to fall in love with other people,” Crozier said. “Except for Dr. Givings, he’s kind of oblivious to love in a certain way. He’s really focused on his work … it’s a marriage built on ‘this is my job, here’s my family life,’ but the family life is not as important to him, at least at the beginning of the play.”

Human intimacy becomes a central theme as the plot progresses, according to Crozier. Throughout the story, subplots begin to develop as characters strive for greater human contact in their lives. Catherine falls in love with Leo Irving, another patient who Dr. Givings is treating for hysteria. Crozier described Leo, an artist by trade, as “free and open,” which juxtaposes him to the restrictive society of 19th century America.

Beneath a play with humorous scenes and dialogue are larger questions: What is a woman who is sexually free? What is genuine intimacy between two partners?

Emily Wilson, ’19, plays Catherine in the Playshop production. She said her favorite aspect of the show is how “interesting and deep the characters are.”

“I’m expecting a lot of mixed reactions to the show,” Wilson said.

“And I think some people will be able to look at what we’re doing and think about it deeply because the characters are really nuanced and interesting and flawed … I think there’s going to be a myriad of reactions for sure; it depends of what people are walking into the theatre with themselves.”

This funny and intriguing plot transpires between two rooms, as the title implies: A parlor and the office of Dr. Givings.

Designing a stage is much like directing a story, according to Associate Professor of Communication Arts/Theatre Michael Mehler.

“You’ve got a script, you know the story that you have to tell, and you are coming up with a visual world kind of from scratch,” Mehler said. “You do research like you would for any other exercise in the world. … All plays have a sort of action. There’s something that happens in the play that the designed environment has to support.”

“Most of the play happens, it seems like, in everyday life,” Mehler said. “And there’s this moment when we just break from that. And the set has to be able to break with it, and that’s kind of one of the things that’s going to happen. The set is going to transform a little bit.”

Mehler’s artistic decisions are in support of the production’s overall theme of human intimacy. Like Crozier, he has to understand the intricacies of the story, and works to visually support it.

The costumes are another component that work to visually support the story. Costume designer Miriam Patterson, along with assistant costume designer Diane Knox, ’20, has made many of the costumes for the play from scratch or recycled materials in the costume shop.

Since the play is set in 1885, Patterson said she has been cognizant of creating historically accurate costumes. Clothing in the Victorian era, especially for women, was heavily layered and tight fitting, so she also took usability into account when producing the wardrobe.

Underneath the generally pastel-colored coats and dresses, Patterson said characters will be wearing corsets and other pieces of undergarments commonly worn in the time period. Every piece of clothing is important, according to Patterson, especially since most of the characters in this production will change wardrobe at some point during the performance.

To further encourage reflection on the questions posed by the play, Crozier has invited Hellwarth and Associate Professor of Communication Arts Courtney Bailey to lead a talk back after Friday’s performance.

Crozier said he is excited to see where the talk goes.