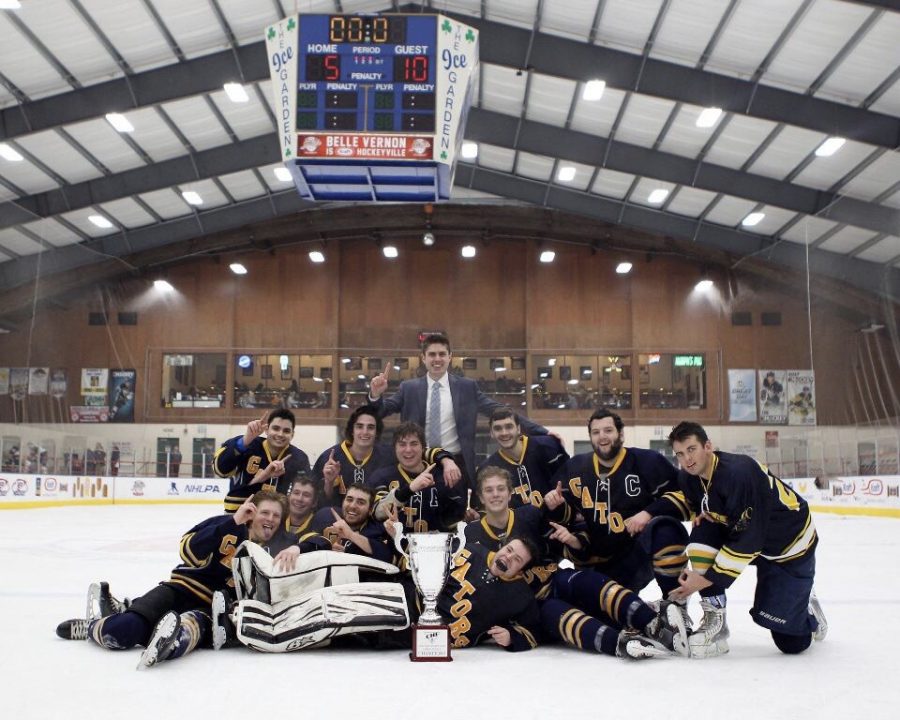 The Allegheny Club Hockey team provides players and coaches alike with a unique opportunity to be involved in the game they love.

With this year’s team consisting of many of last season’s players, the older members of the team have welcomed a number of impactful first-year players. They collectively believe they have the foundations for a very strong and tight-knit squad this season, according to the team’s Head Coach Atlas Besenfelder, ’21.

“I have played sports all my life, but I have never really had the atmosphere that we have with the hockey team here,” Besenfelder said. “It’s just a bunch of really cool guys who are just fun to be around.”

Some of the new faces on the team consist of winger, Jack Barron-Sluga, ’22, and defenseman Owen Harkins, ’21, among others. The players believe they have the foundations for a very strong team.

“We picked up a Canadian defenseman and a Canadian offenseman (Harkins and Barron-Sluga, respectively) and some other good players,” Goalie Max Savino, ’21, said. “With less depth we were able to win last year, and now our team is a lot more threatening.”

The team combines players with prior hockey experience with players that do not have as much competitive hockey experience, but are learning on the job and fitting in well with the team, according to Eli Smith, ’21.

“You don’t always need a huge amount of experience,” Smith said. “We have kids on the team that have played roller hockey in the past and then they play ice hockey and they make the transition alright.”

Smith was adamant that he encourages first-years to come out and play on the team for a number of reasons.

“I would recommend it. It is not a huge time commitment, it’s an easy way to make friends and it’s a lot of fun,” Smith said. “Our team is really good, and winning is a lot of fun.”

The team has a 3-0 start to the season, with wins by as much as eight goals, but Besenfelder said he is trying not to get ahead of himself and get too confident.

The team competes in the College Hockey East league, is part of Division 5 and is  the defending Division 5 champion, according to Besenfelder.

“There are good teams in our division,” Besenfelder said. “We recently just beat Wooster who were the team we played last year in the semi-final in order to get to the championship, who were a really good team, but the additions and more experienced players on our team, like Cam Fisher, (’21), Joe Silvester, (’21), Max Savino, (’21), and Noah Bebee, (’21). Those guys were our freshmen last year and them carrying over and having experience in the league helped.”

Besenfelder also attributed some of the team’s success to a very strong first-year class, who he stressed has done a great job in contributing to the team.

The team hopes to make the jump into a higher division in the coming years, according to Savino, in order to compete against even stronger teams.

The weekly routine of the hockey team is generally not a huge time commitment, but enough of one to have fun and feel the excitement of competitive hockey, according to Smith.

“It’s just two practices a week for about an hour or an hour and 15 minutes,” Smith said. “You don’t have to go to those if you really have something going on, so it’s really not a huge time commitment. We’ll also have usually one game a week.”

Practice is definitely a huge factor in the team’s success, but Besenfelder also highlighted the crowd and the amount of fans that come out to cheer the team on as an important part in winning and being successful.

“Nothing’s worse than going to an away game that’s like a grinder game, which we’re going to have coming up, and just having no one cheer for you, except for me and the people next to you,” Besenfelder said. “I really can’t emphasize enough that getting people to the games is huge for our team and our mindset.”