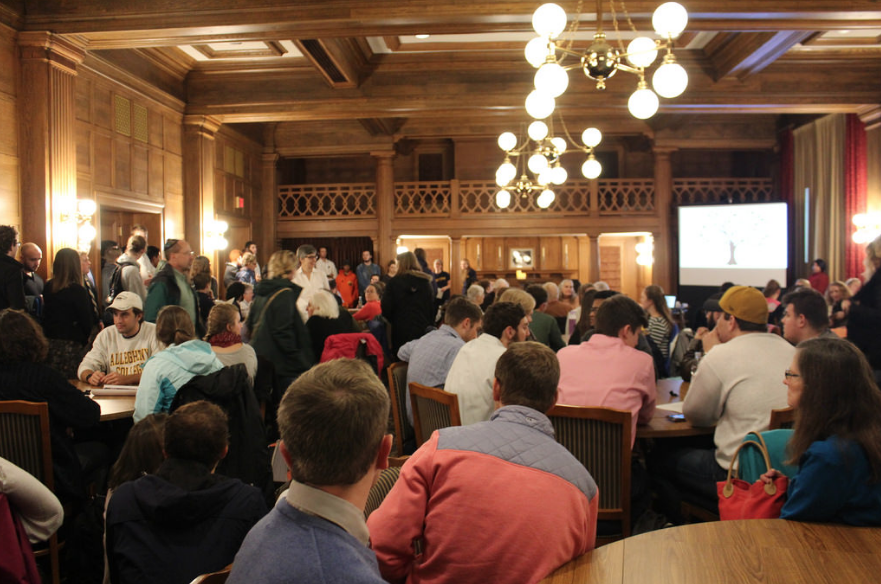 Hillel hosted a vigil Wednesday, Oct. 31, 2018, in the Tillotson Room of the Patricia Bush Tippie Alumni Center to honor those who were killed in the shooting at Tree of Life Synagogue in Pittsburgh, PA, on Saturday, Oct. 27, 2018. The vigil was standing-room only. Students and faculty led the event.

When Barak Levin, ’19, was growing up, his parents and grandparents told him Jews did not have anyone watching out for them, but after looking at an overflowing Tillotson Room, Levin thinks his family members were wrong.

Adrienne Krone, assistant professor of religious studies and director of Jewish life, welcomed attendees but stressed the night was organized by her students — the speakers who led the vigil’s order of events.

“I’m glad so many of you showed up to support them and to support us,” Krone said.

Hillel President Zach Canali, ’19, opened the evening with a reflection of the past week’s tragic events.

“Showing your support here tonight fills me with hope, and I pray that the victims of this horrendous tragedy that yet live will find peace and healing,” Canali said.

Recounting Saturday’s events, Canali stressed the innocence of those who were killed in the shooting.

Their only crime — being Jewish.

“To be who they were, that was their only crime,” Canali said. “Before Saturday and in my ignorance, I would have never thought that such an attack would occur, but even more so, I would have never thought that such a crime could happen in Pittsburgh, in Squirrel Hill, where it would seem that every street corner housed a synagogue and where a Jew would not feel like an outsider he believed he was. It is my home.”

Tree of Life Synagogue is not Canali’s synagogue, but it is a place of refuge; however that solace was defiled by “the hatred of one man” in what Canali described as “the deadliest anti-Semitic act in U.S. history.”

Anti-Semitism has been on the rise in the United States, according to Canali, who fears this incident will not be the last tragedy of its kind.

In Canali’s mind, there is no greater way to defeat hatred than by “continuing to live.”

Struck by the community displayed in Pittsburgh as well as on Allegheny’s campus, Canali said he feels hope — “hope that has been lacking” since Saturday’s shooting.

Before hate can be combated, Canali said the lives of those who were killed must be mourned.

“It is their loss that brings us all here today,” Canali concluded. “It is for them that we stand together.”

To remember the victims in Pittsburgh as well as Maurice Stallard, 69, and Vickie Lee Jones, 67, two African-Americans who were killed in a shooting on Wednesday, Oct. 24, at a Kroger grocery store in Jeffersontown, Kentucky, Emily Csonka, ’21, read names aloud as part of a memorial slideshow.

After each name was read, a candle was lit to honor the deceased. The candles will burn for 24 hours in memoriam of the victims.

The announcing of the names was part of Kaddish, a Jewish tradition used to mourn the loss of loved ones.

Kaddish is a communal prayer, Krone said, meaning it cannot be said unless at least 10 people are present.

“There is an understanding that mourning is a communal project,” Krone said.

All attendees were asked to rise as the prayer was read in Hebrew.

Following a moment of silence, Shalom Rav, a song about peace, was played before people were encouraged to talk about their feelings with those around them.

Mari Mullen spoke on behalf of her husband Allegheny College President James Mullen, who was traveling.

“Jim would be so proud of this turnout,” Mullen said. “There is no doubt that love cannot be killed. Love will never die. Love will not be murdered, and we are all evidence of that.”

Hatred exists in our world, Mullen said, describing it as a tragedy and a truth; however, she said people are able to hold each other up in times of tragedy because love exists — and always will.

“I’m so sorry we all have to be here, and thank you all so much for coming together,” said Roberta Levine, a life coach instructor in the Learning Commons. “I hope you’ll look around the room and you’ll see each other. This is your community.”

Krone welcomed Csonka back to the podium to read a liturgy for survivors of terror attacks.

“…Remember now those who are suffering from the trauma after the attack at the Kentucky Kroger and at the Tree of Life Synagogue in Pittsburgh,” Csonka read. “Release them from visions of death and destruction. Release them from guilt or shame, from fear, or any anger. …”

After Csonka finished, Sydney Lewis, ’19, read a Facebook post that circulated among members of the Jewish community. Then, Canali read a prayer titled “After a Deadly Anti-Semitic Attack,” a prayer written after the violence in Toulouse, France, in 2012.

“It is sad to say that this is serving as a template for other deadly attacks that have happened since then,” Canali said. “Though I do believe this is the first in which it takes place in the United States.”

Danielle Mawhir, ’20,  followed the prayer with a call to action. Thanking attendees for showing “physical support,” she continued to talk about the necessity of “showing up” in times of hardship, adversity.

“It’s not just enough to show up when it’s convenient for us in our schedules, but to keep showing up when it matters and when it’s hard,” Mawhir said. “Times like these matter.”

Although Mawhir said the synagogue shooting could be made political, she was not going to treat the event with that perspective in mind.

“I’d like to urge you to look at this event for what it was — an act of hate that has permanently taken away valued members of our community,” Mawhir said. “One that claws at our feelings of personal safety, comfort and belonging.”

This uncomfortableness, Mawhir said, is felt by minorities across the United States, people who are put in danger simply for being themselves, people without anyone else to turn to.

“I challenge you to reflect on these feelings and these messages,” Mawhir said. “For those of you who have never experienced such hate, reflect on what it would be like to be targeted for an identity that you hold.”

Mawhir urged listeners not to forget that feeling of discomfort.

“Do not forget what has happened,” she said. “To choose to forget is to choose indifference and ultimately, acceptance…”

Fight for much needed change, Mawhir said. She told the audience to work with their strengths — whatever they may be — to make the world a better and safer place to live in.

“Talk of systemic change is always met with grumbles that one person cannot make a difference,” she said. “While not only destructive to the ideas and the efforts of social activists and grassroots movements, this kind of thinking assuages our consciousness when we ignore our responsibility to participate in our civic duties.”

Mawhir posed a question to the audience: If throughout history people, like us, thought that they all, individually, could not make a difference — where would we be?

Urging people to become informed voters, Mawhir stressed the fact that people’s voices and votes matter. She asked the audience to be mindful of other people’s different life experiences because of “who they are and what they look like.”

“We have the power to make things different,” she said. “… Lend a helping hand, offer words of encouragement, be a friend and bridge the differences between us, and you will find that they are often not nearly as vast as we may have imagined or have been told.”

The events in Squirrel Hill should not be forgotten, Mawhir said.

While the victims’ families will never be able to forget about their lost loved ones, Mawhir thinks the least people can do to honor their lives is to step up, treat others with respect and show up in the face of tragedy — demanding systemic change by voting in elections.

“This is how we respond,” Mawhir concluded.

Hannah Firestone, ’19, read “Why I Speak,” and Levin brought the vigil to a close by reading “We Remember Them” a poem written by Sylvan Kamens and Rabbi Jack Riemer.

Before he began, Levin spoke of childhood memories, being taught that Jews only have themselves. Struck by the amount of people in the room, Levin said he did not feel alone.

Throughout the night, each speaker remembered and recounted the events in Squirrel Hill. By thinking back, they offered suggestions on how to create a better future.

“… For as long as we live, they too will live; for they are now a part of us, as we remember them,” the poem ends.