Provost Cole speaks to ASG, Chief of Staff Fazio steps down, to be officially replaced by Ferrante 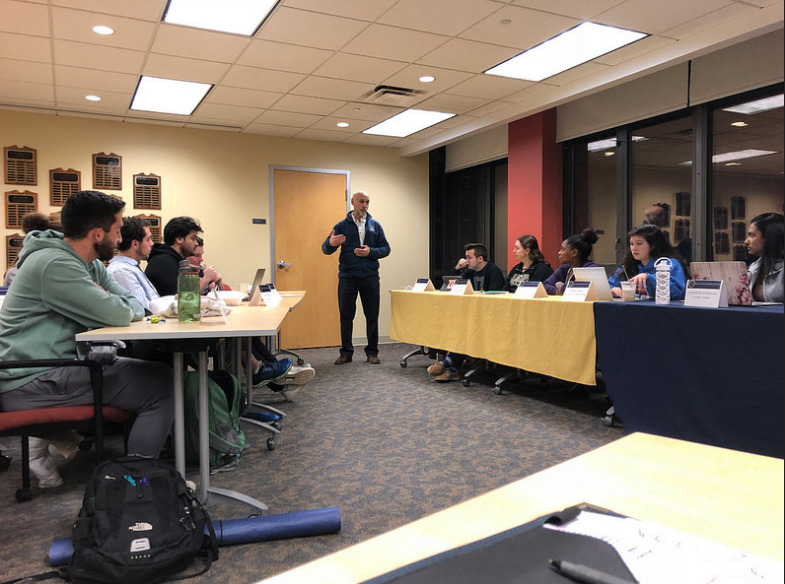 ASG welcomed Provost and Dean of the College Ron Cole to speak on academic and curriculum matters, and John Fazio, ’19, made his official announcement of his resignation as chief of staff during the meeting at 7 p.m. Tuesday in the campus center.

Cole spoke to ASG cabinet members and senators about smaller class sizes as well as the professors and staff of the college who retired over the summer, along with changes in major and minor programs and how the new faculty are doing.

“We’ve had a really strong start to the academic year,” Cole said. “We are aiming to bring down the amount of students we recruit, due to the smaller amount of high school students (these days). Because of this we also have a need of less staff this year. We didn’t force anyone to retire, but we added a strong incentive. We had 23 faculty accept that retirement incentive last year.”

Cole also said the college had no intention of cutting any of the major or minor programs Allegheny offers, but there were some the college was no longer able to support, such as art history, medieval and renaissance history, and the German program was reduced to a minor.

Cole told ASG of the college’s plan to be down to 142 faculty by the end of three years and around four hundred fifty to five hundred ninety students due to the smaller amount of high school students graduating and applying to Allegheny.

When asked by Jason Ferrante, ’20,  about classes that are still available on WebAdvisor but are no longer offered as a class, or some that are only offered every two or three years, like the junior seminar for the journalism minor that is causing some problems for students, Cole responded by saying “there’s a general rule of thumb that each course must be offered once every three years.”

Cole also brought up the college’s Curriculum Committee that is specifically designed to help schedule class times and work on addressing issues related to course offerings.

After Cole was finished speaking, ASG moved into cabinet reports where Fazio made his resignation official.

Fazio’s resignation was a result of “a very heavy workload.”

“Because of this I’ve decided that I need to devote more time and energy into my studies,” Fazion said. “Second, some of my other extracurricular activities require more of my time and attention.”

Fazio decided ASG was the extracurricular he had to give up to be able to devote his time to his studies, prompting his resignation

With this mid-semester change, it was decided the normal process of voting would take too long, and ASG President, Camila Gomez, ’19,  discussed her plan to make the transition for the new chief as smooth as possible.

“For time purposes, we’ve opted not to do the traditional application and election process,” Gomez said. “It is really important (to make this change quickly) to be able to fulfill our duties and fill the committees for the College Committees Council. That is why I feel really confident tapping Jason Ferrante to be the next chief of staff.”

Gomez said the official vote and swearing in of Ferrante will happen at the next general assembly meeting.

When the room was asked for constituent comments, a member of the Outing Club, Gabriel Curtisbrown, ’19, came forward and demanded his trailer to be returned to him the following day. First Year Liaison, Osbaldo Meza, ’21, explained the trailer was from the Halloween Parade after many senators in the room expressed confusion. The Halloween parade occurred over the weekend and ASG was represented by a float that the first-year class made to participate in the parade. This foat included the trailer that was borrowed from the Outing Club. Meza also stated that the parade went very well.

ASG approved the constitution proposed by Egg Detectives as well as a constitution from the Computer Building Club.

Gretchen Beck concluded the meeting with her adviser report. She encouraged ASG members to stand by members of the student body to offer support after the shootings in Pittsburgh.

“I hope your hearts are thinking about your peers and your friends and even your colleagues and administrators that were all affected by that (the shootings in Pittsburgh),” Beck said.