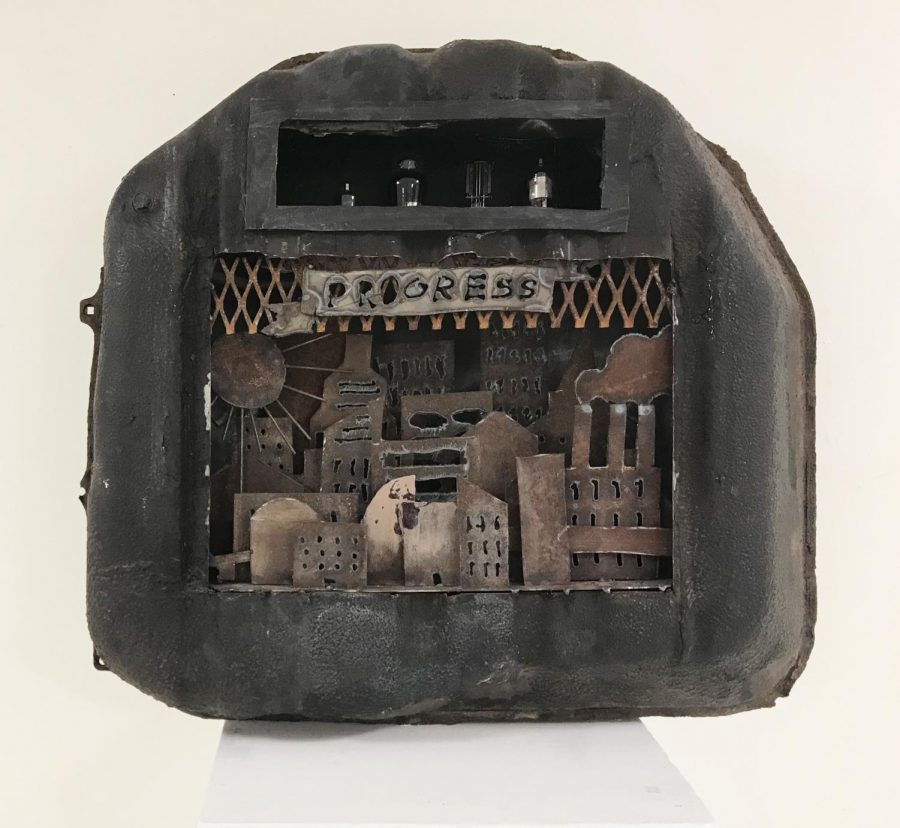 Throughout the school year, Students for Environmental Action holds various events including the annual Trashion show, potlucks at the Green Living House and Wild and Scenic Film Festival. One goal of these events is to educate the Allegheny community about current environmental issues.

Art is one medium that is effective for spreading information about current environmental issues, according to Erin Zehr, president of Students for Environmental Action.

“Statistics alone can be a little bit bleak and sometimes a little bit hard to digest when you’re faced with all of these numbers on carbon emissions and all of that,” Zehr said. “So I think art is a really good way to sort of convey the emotion of (environmental issues).”

The Green Student Art Show, which opened on Oct. 13 and is located on the first floor of the Henderson Campus Center in the Doane Hall of Art, does just that — uses artwork to increase awareness about current environmental issues. The show was organized by Thompson, who serves as vice president of the Student Art Society and member on the board of SEA.

Thompson curated the first Green Student Art Show in conjunction with the Wild and Scenic Film Festival, an event held annually in the Shafer Auditorium that displays short films that raise awareness about global environmental matters. The featured art pieces will remain on display until Nov. 5.

“It’s the first year that I’ve been a part of (the film festival), and they have, in the past, really wanted students to also be a part of it in a lot of different ways,” Thompson said. “Either with helping out with activities or even producing their own films that we could show in the queue of films that we have been given by the national organization.”

Since Allegheny students have contributed their own films to the festival in past years, this gave Thompson the idea to display other mediums of artwork concerning environmental issues as well. She encouraged any artist at the college to submit their pieces to the show, and received a diversity of paintings, sculptures and digital artwork.

Thompson said her interest in art goes back to her childhood, as her family encouraged her to not only explore the visual arts, but also music and other creative fields. Once she arrived at Allegheny last year, she saw the opportunity to apply her artistic abilities to environmental science.

She became interested in SEA and the community projects the club did throughout the school year, worked with Amara Geffen, adjunct professor of art and art in the environment, over the summer and now works as a gallery assistant at The Allegheny College Art Galleries.

This is Thompson’s first year working as a gallery assistant, where she aids in setting up and presenting art shows. Because of her experience setting up two art shows in collaboration with the other gallery assistants, she felt confident to set up the Green Student Art Show on her own with the support of SEA and SAS.

In addition to work from other students, Thompson featured some of her own pieces. One of them is a “deconstructed fuel tank,” which she used to create the skyline of a city, with the word “progress” written on top of the tank.

“These are all metal pieces that are welded into the fuel tank frame,” Thompson said. “And that’s supposed to be talking about the Industrial Revolution kind of us moving forward, but also us moving (backward) with the amount of pollutants and things we put into the atmosphere.”

President of SAS René Benoit, ’20, also submitted some of her digital artwork to the show. She took “historical and anatomical drawings” that she found and incorporated effects of climate change into different parts of each body through Adobe Photoshop.

On one of the pieces, she photoshopped bleached coral in place of the lungs of a black and white body, and then placed a hydrofracking pool onto the stomach. Another piece incorporated an endangered butterfly as the thyroid gland, and two others also photoshop various objects from the environment as a replacement for human body parts.

“These are the feelings that I feel from what we as a species are doing to the environment,” Benoit said.

Through her work, Benoit is trying to translate environmental damage onto the human body, and her goal is for people to see that “we are doing this to ourselves,” meaning that humans are causing these environmental impacts and then suffer because of them. In other words, humans are hurting themselves by hurting the environment.

The environmental themes on display in the art show are by no means limited. Pieces from other artists allude to pollution, factory farming and nuclear waste.

Visual arts like video, paintings, sculpture and digital art are “impactful” and can aid in “pushing ideas forward,” according to Thompson. And that’s one of the things that artwork does, according to Benoit — “it brings people together to look at something (and) have beautiful thoughts about it.”

Benoit said she hopes the Green Student Art Show continues in the future.

“I think (Thompson) presented (the art show) really nicely,” Benoit said. “I would love to do more stuff like this in the future; I think it was a really nice (addition) to the Wild and Scenic Film Festival.”