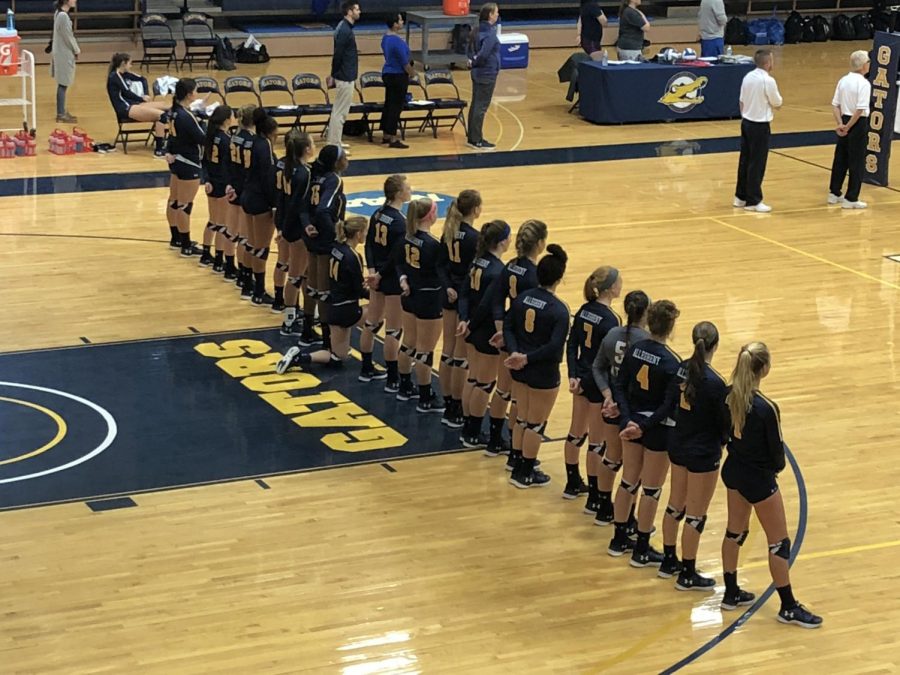 First-year volleyball student-athlete Claire Klima, ‘22, kneels in her team lineup during the national anthem at a home game on September 22, 2018.

Allegheny volleyball player Claire Klima, ’22, is hoping to start a conversation that begins on the court and expands onto campus.

The first-year athlete has been kneeling during the national anthem at every game during the fall 2018 season.

“There is a huge disadvantage which African-American kids are put at in this country,” Klima said. “Right now, not everybody is as free as we like to profess that we are.”

Klima was able to witness this inequality firsthand in her home state of Michigan. She said she first began kneeling in protest while on the Lincoln Consolidated High School volleyball team in Ypsilanti.

Klima was not the only athlete on her high school team to kneel. She said her team’s choice to kneel often sparked deeply divided reactions from spectators, ranging from social media criticism to having objects thrown at them on the court.

“(There were) just violent reactions, but that only made it seem that much more important to participate in,” Klima said.

Klima’s inspiration has not lessened since coming to the college, according to Klima, who said that she knew she wanted to continue kneeling when she came to Allegheny.

“Coming to a college campus as opposed to a high school campus, I’m representing more than just myself now,” Klima said. “So I came to my coaches and told them what I wanted to do.”

Barzak referred to the Allegheny athletic department’s stance on the protests in an email, which reads “Please know that our coaches have neither encouraged nor discouraged participation in this form of peaceful protest, they have however engaged their team in meaningful dialogue surrounding this choice. It is our hope that all of our institutions foster and support an environment that ensures a safe and positive experience for all participants and fans at all events.”

Klima said her actions are not new to the athletic department — the women’s basketball team took place in a similar protest last year, according to Klima. She said the protocol for the department’s response was established when she came to her coaches about kneeling.

Klima was asked to find the contact information for the coaches of all the teams Allegheny would face in the upcoming season so that Interim Athletic Director Bill Ross could send an email at the start of the season explaining Klima’s intent to kneel before games.

“Not saying (Ross) was against it, but just saying it’s completely independent of our team,” Klima said. “That was a little bit of a hoop to jump through, but I did it. I wasn’t going to let it hinder me.”

Klima said she also engaged in a conversation with her teammates to inform them of her intentions.

Athletes from other teams have had positive reactions to Klima’s actions, Klima said. Her own team has been largely neutral in its reaction. According to Klima, she invited any of her teammates who may be “offended or confused” to have a conversation with her.

“There are some girls who I know are Republican on the team or have military family members, and I wanted to be sensitive to that,” Klima said. “I haven’t had anybody have that discussion with me.”

Spectator reactions have been relatively calm, Klima said. While she keeps her head down in an effort to avoid looking at the crowd, friends and teammates have told her about commentary and pointing among fans.

Klima is planning to kneel for the rest of her career at Allegheny. She says she is also hoping to become more politically involved on campus.

“I’m not going to speak on behalf of a group of people that I don’t belong to, but it’s a conversation that needs to be had, and that’s what the protest means for me — is to invoke that conversation,” Klima said. “I really just want that conversation to continue until something is resolved, and this is just my minor part in that.”