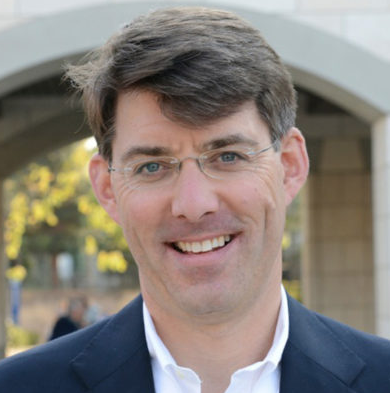 “I don’t mean you have a narrow perspective, I just mean that I have a different perspective than you do,” Ball said.

Ball’s talk centered around the dangers of climate change and the challenges of managing the twin forces of environmental progress and economic incentives.

“Because I think history suggests that when environmental progress and the profit motive are in conflict, the progress doesn’t happen,” Ball said.

“Not only is it the case that renewable energy isn’t a silver bullet, but I’m sorry to tell you that there ain’t no silver bullet, period,” Ball said.

While developed nations are largely moving towards more environmentally friendly energy policies, they are not the biggest sources of pollution, Ball said. Most of the emissions from fossil fuels come from developing nations such as China and India.

Ball referenced actors as diverse as the petroleum company Royal Dutch Shell, Saudi Arabia and a German farmer to show how global patterns are trending toward the expansion of renewable energy.

“If you feel you need to persuade CEOs that this is an existential issue to them, you are wrong,” Ball said

While it was good for countries to transition to different sources of energy, including nuclear, Ball thinks the best course would be to reduce the amount of overall energy consumed.

“We need to get smarter about using it, whatever it is,” Ball said. “I’m not going to get into any of that, but I just want to say, as a launching point, that we should keep in context, I’m going to go deep on renewable energy, but I want us to be clear there’s a broader landscape here.”

Ball used the example of the French transition to nuclear energy in the 1970s to show that major energy transitions are possible.

Ball said the history of renewable energy could be divided into three phases. The first one, the age of necessity, saw renewable energy as a niche technology. For example, solar panels were rare in any setting other than outer space.

“At that point, renewable energy is a science project,” Ball said. “It’s a business, certainly, for some small companies, but it’s certainly not a massive industry”

Ball set the second age, the age of subsidy, during a renewable energy push in the 1990’s. Ball said European countries such as Germany introduced ambitious plans to develop their markets for renewable energy after the 1986 Chernobyl nuclear disaster in Ukraine spread radioactive fallout over parts of southern Germany.

“The reason these technologies grew was because people threw money at them,” Ball said.

Ball said the modern world was entering the third stage, which he called the age of competitiveness, in which renewable energy and fossil fuels are equally sensible economically.

“Not everywhere, there are a lot of (asterisks to this, but the point is we are on the cusp of economically competitive renewable energy which changes the game in really fundamental ways,” Ball said. “We have yet to see how that plays out.”

While renewable energy is often seen as an unmitigated benefit, Ball mentioned a few dilemmas the rise of renewables brought up, such as displacement and loss of jobs.

“Not just the big bad evil coal and oil companies, and I’m using that facetiously, because they’re providing energy to people and are useful, but what happens to the people who they employ, whose jobs are lost? People, by the way, who live in Pennsylvania,”  Ball said.

Joan Mason, 70, an attendee at the talk, said she appreciated Ball’s willingness to write about problems as difficult and multifaceted as climate change.

“He’s not looking at things as black and white, but instead as gray and challenging, so that it seems he’s turning over rocks and finding new things,” Mason said.

Mason said Ball’s talk reminded her just how much the world has changed since her childhood.

“All of it was interesting to me, from the minute he opened his mouth until he said ‘we’re done,’” Mason said.

Shulamit Bronner, ’22, said she attended the talk because she wanted to know more about energy.

“I just feel like (Ball’s lecture is) leaving me with so many questions to think about, how to incorporate combating climate change through renewable energy in our society.” Bronner said.

Bronner was struck by the multiple facets of the problem Ball mentioned, especially the role of global actors like China and India.

“(The talk) was a pleasure,” Bronner said. “There’s so much going through my head.”