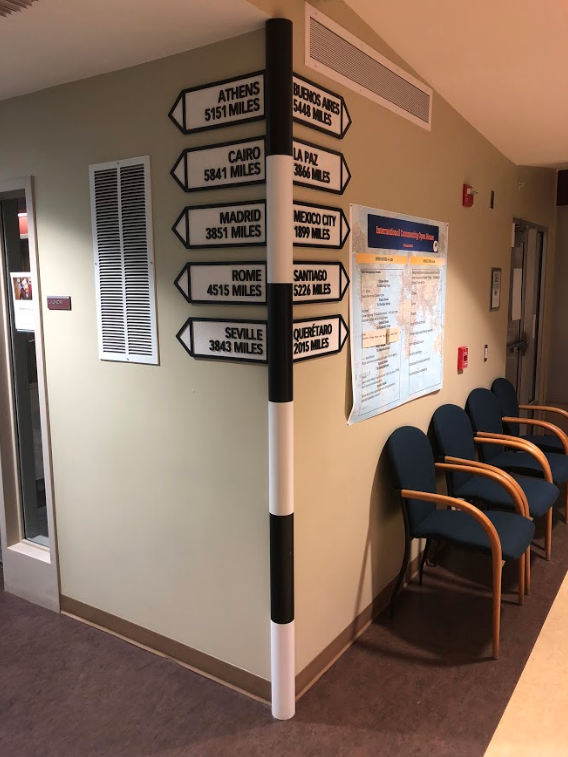 In 2006, the language-based housing at Allegheny College moved from East College Street to the newly built apartment-style housing in North Village 1-C and was named the Max Kade International Wing.

The Max Kade International Wing is a special interest housing unit in NV 1-C that emphasizes the experience of cross-cultural growth and learning. It is comprised of five language-based apartments and one International Interest House that operates under a no language requirement basis. The language-based houses include: Spanish, Chinese, French, German and  a fifth house that combines Middle Eastern, North African and Arabic cultures and languages (the MENA house).

The general goals of the Max Kade housing units are to target students with strong backgrounds in different languages and culture areas and to serve as a communal space where a wide range of students with diverse backgrounds and interests can come together and share their knowledge.

Barbara Riess, chair of the modern and classical languages department, is a strong advocate for the Max Kade houses. Riess is also involved in the yearly student selection process for each house. She organizes the student applications and serves as a member of the committee that helps designate which student gets reserved a place in each house. This committee is also comprised of professors who teach seminars based on each of the specialized languages for each house.

“The unit came into existence when a donor from the Max Kade foundation provided enough funds to complete the International Housing program in NV I,” Riess said. “Each house used to have a different flag right outside of it. It was kind of cool to walk down the road and see all the different flags out there. After (the) establishment of the International Interest House in 2011, demand for placement in this house was at a steady increase well into the year of 2017.

“Up until 2017, there were five language-based apartments, and two International Interest  housing units,” said Reese Campbell, Ruter Hall coordinator and head of advertising and marketing for the Max Kade International Wing.

Campbell said the Max Kade housing assignments are all based on demand, so the increased demand for placement in Spanish-based language housing led to the creation of two Spanish houses for the 2018-19 school year. There are now currently seven Max Kade houses: five houses that require students to be enrolled in a language-based house respective to the house they are living in, one International Interest house, and the seventh MENA house. Although the MENA house is language-based —  it was created to target students who have a background in Middle Eastern, North African or Arabic culture and languages — it does not require students to be enrolled in any language course.

The International Interest House in the Max Kade wing functions as a space for students who have a heavy academic interest in international studies and affairs. The space celebrates cultural diversity, while also providing opportunities for students who are unable to fill the requirements of language-based housing. In order for students to receive allowance into a language-based house, they must speak the target language of the house in which they are requesting residence for.

The purpose of the International House, in comparison to the other Max Kade houses is to give people who are interested in international cultures a space to thrive and connect with people of various backgrounds, and to also give them an opportunity to work together with like-minded people.

“It gives them a chance to live together with people with similar interests and be in that language house where they’re interacting with people of different backgrounds. Hopefully they’re still getting together and talking about World Events and things like that,” Campbell said.

Campbell is also in charge of contacting students who have been approved for selection into their house of choice.

One these students, Emma Black, ’20, is the resident adviser for the International Interest House. She is an economics major, and German and math double minor. As the RA for the International Interest  House, she keeps consistent communication with the Department of Modern and Classical Languages, as she is responsible for coordinating and programming events for her residents.

After Black received her qualification to be an RA, she then applied for residence in the International Interest House. She was excited about the chance to be involved in a globally aware community and learn new intercultural perspectives.

“When I talked to my boss about where I wanted to be placed I said the International house, because I lived abroad in Germany for a year as an exchange student, and I have a lot of travel experience, and I just was really motivated by the idea of having residents from all over the world and people from different cultures,” Black said.

Krishna Phuyal,‘21, one of Black’s residents said he first decided to apply because he was motivated by one of his friends, who is a current resident of the French House.

Phuyal said that his interest in the International House was derived from his history as a refugee who came to the United States to become a citizen. He said he speaks four languages: Napoli, Hindi, Punjabi and English, and this aspect of his background helped him acquire residence in international housing.

Phuyal said his favorite part about living in international housing is because it is a space that provides closeness and privacy at the same time.

“I have my own room, but we’re all close to each other, and we can go and talk and stuff like that,” Phuyal said. Although the International Interest House has not yet had any major events for the current school year, Black and Phuyal are anticipating what may happen in the future.

The Max Kade houses provide a significant sense of belonging for students with unique interests who may have difficulty connecting with others, according to Riess.

“That’s the place that they wanna go if they want to live with international minded students like themselves, and there’s opportunities for connecting with other international groups on campus if they were to live in the house,” Riess said.