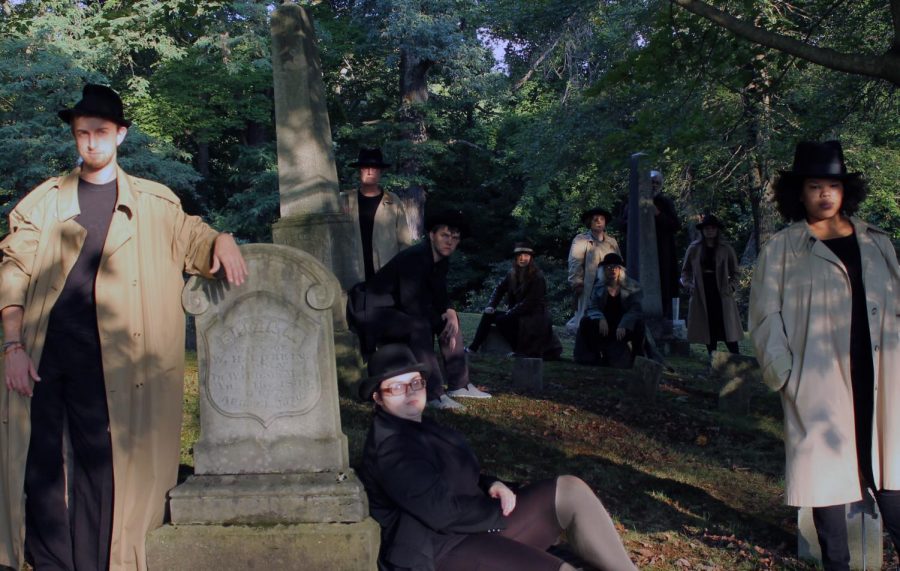 The publicity photograph for “Mortified” depicts the cast in a graveyard. “Mortified” debuted Thursday, Sept. 27, 2018, and runs through Sept. 30.

Every year, the Playshop Theatre brings historical and contemporary plays to campus, and not all plays are works of famous playwrights like William Shakespeare, Sam Shepard and Wendy Wasserstein.

Beth Watkins, professor of communication arts/theatre and director of “Mortified,” the first production of the 2018-19 school year, said she has worked with students in the past to “devise” their own works. She said each devised production has been unique, focusing on themes like self-harm and invention and discovery.

According to a December 2016 Guardian article, a devised play is one created by all members of a cast and stage crew. In other words, every member of a company works to develop a script from scratch and ultimately presents a product of group collaboration.

Watkins has been working with 10 Allegheny students and three community artists to devise “Mortified” since March 2018. The Playshop Theatre production opened on Thursday night, and performances will continue

at 8 p.m. Friday, Sept. 28, Saturday, Sept. 29, and Sunday, Sept. 30, in the Gladys Mullenix Black Theatre in the Vukovich Center for Communication Arts.

“Mortified” is a thematic production, according to Watkins. The play is not plot-driven, but rather focuses on different ideas about the overarching theme of death. Some scenes focus on the body itself and what happens directly after death, while others stray from the physical corpse and depict common social functions around death, like funeral gatherings.

Watkins decided on devising a production about death before she held auditions. This theme is uncomfortable for most people to talk or think about, according to Watkins, but at the same time is becoming a more prevalent topic in national dialogue. In Meadville, Barbara Newcamp and Sue Mallick brought the death cafe, a global trend focused on opening up about death, to the community in October 2017.

Beginning in March, Watkins, the cast and stage crew met multiple times throughout the spring semester to do just that — talk about death. Their conversations were recorded and transcribed by Watkins, who then compiled them with other written thoughts about the topic from company members and turned the content into a script over the summer.

“I would say that 85 to 90 percent of the words in the play came out of the mouths of the actors,” Watkins said. “Our stage managers — we had a team of three of them that were on the show — were also a part of that process, so some of their words are in there too.”

Throughout the process, however, the group did more than share thoughts and prior experiences and do research on the natural process. They visited a cemetery and funeral home, learned about different processes like embalming and, overall, tried to convey a holistic view of death, according to Draigh Ricketson, ’21, a member of the cast.

Ricketson has performed in previous Playshop Theatre productions, including Romeo and Juliet in Fall 2017. He said playing a role in “Mortified” was his first time as a member of a devised production, and commented on the result.

“(‘Mortified’) is Brechtian,” Ricketson said. “If someone ran up to you and said, ‘There was a car crash. This guy swerved to the left and then he hit a pole,’ that’s Brechtian. It’s just reporting the incidents as they happen instead of saying, ‘Hey, watch us perform this car crash.’”

Bertolt Brecht was a German playwright in the early 20th century. Watkins said Brecht was interested in keeping audiences conscious of the ideas presented in theatrical performances. Therefore, “Mortified” is a didactic performance, since the goal is more oriented toward having a conversation about death, rather than create a plot around the topic.

Through the use of dialogue, singing and dance choreography, the cast often talks directly to the audience. It provides historical and cultural information about death in an entertaining manner, according to Watkins.

“One of the things that the production in itself plays with is tone,” Watkins said. “We’re talking about a pretty serious subject, but we’re also trying to find a lot of ways in which we can present that material, and not ignore the humor that sometimes goes with death. … At the same time we’re trying to be respectful. We’re not out to hurt people’s feelings or to make fun of religious behavior, or anything like that.”

Through presenting numerous different ideas about death during the play, Watkins said she hopes audience members are encouraged to talk more openly about the subject. She also hopes that people see how creative the process of devising is for the students, since it is a product of their own ideas and experiences.