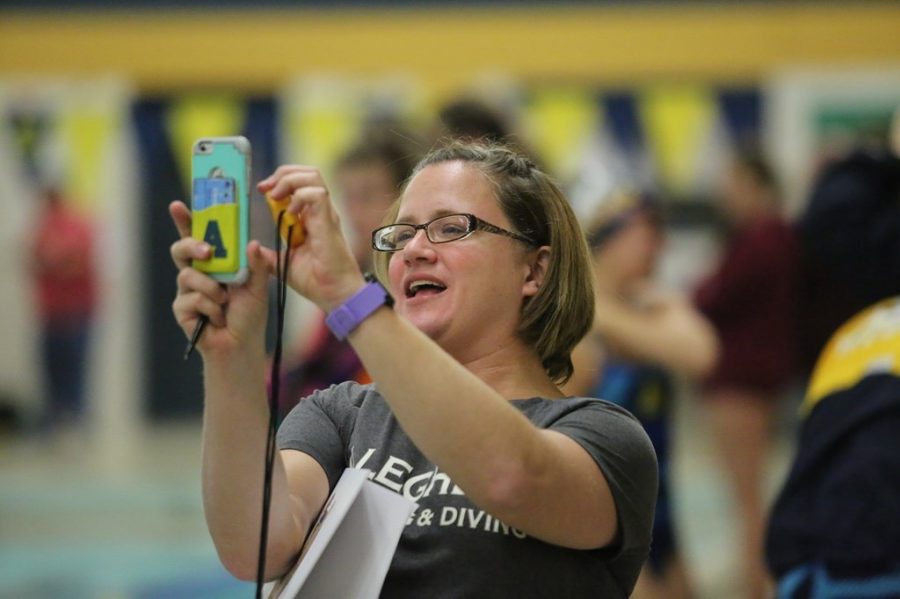 Becky Dawson, assistant volunteer swimming and diving coach, takes a photo on her cellphone while coaching the Allegheny team. Dawson also serves as a faculty athletic representative and teaches classes at Allegheny.

These seven coaches offer their time and talents to six Allegheny varsity sports, sometimes bringing as many as three or more decades of experience with them.

Norm Price, volunteer assistant coach for the men’s basketball team, is one such coach. Before coming to Allegheny, Price spent a total of 35 years at Meadville High School, acting as head basketball coach, athletic director and then returned to coaching. He retired from Meadville with 25 years at the head of his program under his belt and said that at 57, he was not ready to leave coaching behind.

“I enjoyed being around younger people,” Price said. “I knew that Allegheny had some people that were volunteers. I had a connection with the previous coach. He asked me and I said ‘sure, I would be interested.’ So that’s how it started.”

Price has been part of the Allegheny men’s basketball program for five years, four of which have been under current head coach Bob Simmons. He said he looks at his position as helping Simmons and the other coaches in any way possible.

Volunteer assistant coach Tim McCord, who works with the men’s and women’s golf teams, described a volunteer’s duties in a similar way.

“The assistant coaches do what the boss wants,” McCord said. “But the nice thing about being a volunteer is I can also say no. If I have something else going on in my life that I have to be there, I can say, ‘no, sorry, I can’t help out at this time.’ And I don’t do it. For me, the main thing is I love coming to practice.”

McCord has been coaching golf practices for nearly 40 years. McCord also spent 32 years at the helm of the Titusville High School golf program before approaching head coach Jeff Groff about becoming a part of the Allegheny program.

“Basically, I just offered my services,” McCord said. “I said, ‘Listen, if you ever need any help,’ though I didn’t really know what that meant, it was up to him to define it. I said, ‘I’m willing to help out with whatever you need.’ ”

Volunteer assistant coach Becky Dawson, ’00, also emphasized flexibility in her position. Dawson, an alumnus of the Allegheny swim team, teaches in the biology and global health studies departments and was eager to rejoin the athletic community.

Dawson began attending meets in her first year as a professor and asked to become more involved by her second. She now spends one to two days a week on deck at the pool.

Dawson, who called her volunteer assistant title a “generous” one, said she is content with her role.

“I feel like I recognize I am not cut out to be a full-time head coach. I am not skilled in technique or any of that stuff, but I love being enthusiastic and encouraging people to do things that they don’t believe they’re capable of doing,” Dawson said. “I’m just a cheerleader, and I’m totally fine with that and embracing my strengths.”

“It’s exciting to be part of this community and to hopefully be an encouragement or steady piece to the players, both on the soccer team to coach, but even with the other teams because that’s part of my role to serve and encourage,” Hall said.

Hall has been coaching at Allegheny for three years, but he has been a part of the Allegheny community for five. He works for the Coalition for Christian Outreach and is in charge of athletic ministry and serves as the adviser for the Fellowship of Christian Athletes.

Hall said his journey to his soccer position began with freeze pops.

“Long story short, I’ve given freeze pops to the men’s soccer team since my first year to serve them and get to know some players,” Hall said.

“For me, it’s somewhat of an extension of my ministry on campus and to get to know the guys to love them in that way,” Hall said. “Also, it was just kind of neat the connection that freeze pops brought me — from freeze pops to coaching.”

Hall’s day-to-day duties include warming up the keepers and contributing input to general coaching decisions. He said his biggest frustration is not with coaching itself, but with being unable to be involved at every moment.

“Now with three years, I’ve gotten better at saying no to practices I can’t make or things,” Hall said. “But I really want to be in all the things, but with the other stuff I do on campus, it’s not possible. It can get really frustrating. I don’t want to let the guys down, I don’t want to let the coaches down, but learning to set healthy boundaries for myself as well.”

Price said his frustrations at Allegheny were tied not to time commitment, but to the challenges the team faces.

“Now, through the hard work of coach (Simmons) and his assistants, I really believe that we’re at the beginning of becoming a very competitive team in the league,” Price said. “But it’s frustrating to know you’re in a league that is as challenging as ours. We didn’t really have the talent level to compete.”

Martinelli’s entrance into his current position marked the beginning of his coaching career rather than the end. Martinelli served as a student coaching assistant for four years as an Allegheny student. Simmons, who began coaching during Martinelli’s junior year, offered Martinelli a position on staff upon his graduation.

“I really am using this to kind of break into the coaching business,” Martinelli said. “I’m thankful for the opportunity to start my career here.”

Martinelli’s primary duties include recruiting, particularly in his native city of Pittsburgh, and working with offensive players and strategy. He said his current plans are to remain at Allegheny for roughly three years before moving on to the next opportunity.

“Obviously, being a volunteer is tough financially,” Martinelli said. “If I could be here as long as I could, that’d be great.”

The seventh of Allegheny’s volunteer assistant coaches, Darryl Jones, came to the baseball team with 18 seasons of coaching experience as well as a baseball career of his own. Jones played for the New York Yankees in the 1970s and played alongside Willie Randolph and Thurman Munson during his time in MLB. Jones later used his expertise to coach for the French Creek Valley American Legion baseball program.

McCord also came to Allegheny after coaching younger students and said one of the best parts of being a coach is building a connection with athletes.

“That (connection)’s hard to put into words how much that means to a coach whenever you can keep that relationship going,” McCord said.

McCord is planning to remain at Allegheny as long as he finds his duties meaningful and fun.

“I plan on doing it until it becomes more like work,” McCord said. “Right now it’s not. It’s fun.”

Price said he has similar plans to remain on staff “as long as I feel myself that I can contribute.” For now, according to Price, he is enjoying volunteering and assisting in whatever way he can.

“Really, a lot of people, like my friends will say to me, ‘Why do you do this?’ ” Price said. “And this is one thing I think I can do: not only helping Coach (Simmons), but helping if the kids have problems. If I can do something for someone, it just makes me feel good that I’m contributing something.”