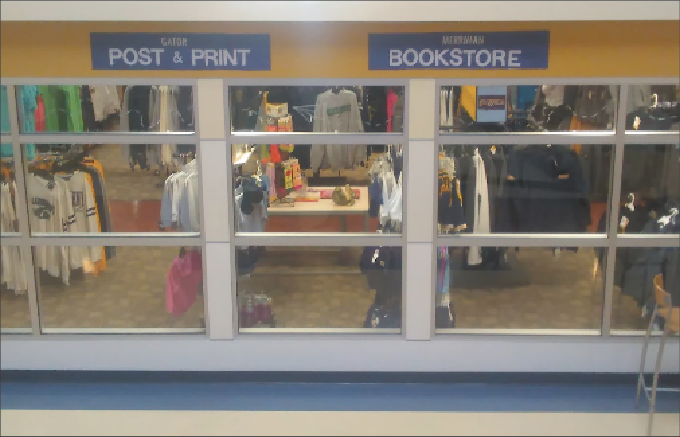 Signs outside the new establishment display the location of the Merriman Bookstore and Gator Post and Print.

As part of its current cycle of renovations, Allegheny College has combined its post office, print shop and Merriman Bookstore into one office, known as Gator Post and Print. The new office is located on the second floor of the Henderson Campus Center and is managed by digital services company Ricoh Global.

Denise McHale acts as the site manager for Gator Post and Print, and previously assisted in running the bookstore. McHale said the change in setup was focused on improving the experience for students using the services.

Susan Salton, vice president of college relations, said the types of mail students received began evolving, and the college wanted to change with the times. With the advent of email and online ordering, students were receiving more packages and fewer traditional forms of mail, such as letters.

“When we talk about the bookstore, the upstairs of the bookstore was textbook-only, and  we saw those sales, the need for textbooks on campus, declining, as students were ordering online,” Wetsell said. “Which shifted the work from the bookstore into the post office.”

The college’s decision to stop stocking textbooks at the former bookstore and move to an online-only ordering system compounded the trend, though the decision to form Gator Post and Print came later and was a separate event. Salton compared the manifestation of the events to the stages of a project.

Wetsell said the idea of combining the bookstore and post office seemed natural, as the two departments existed directly next to each other. Additionally, once the college moved to online textbook ordering, the bookstore no longer needed its space on the third floor of the campus center, where it had stored textbooks. That space got incorporated into the Student Life suite, and now houses the Dean of Students Office.

Along with physically combining the three offices, the consolidation allowed certain services to move online. Salton cited the addition of email notifications of mail delivery, an idea obtained through student feedback, as a substantial benefit to the automation of some processes.

“And from feedback we’d previously received, for example, the original post office hours, which were from noon to 4 p.m., there was no sort of notification to students that they had mail, or that they had packages, and so sometimes students would wait until the post office opened up, and end up in a line to find out that in fact you know, they didn’t have a package,” Salton said.

“We are going to be having an online portal through which if you submit a print job, you yourself can check online to see the status of the print job, which is again related to customer service,” Salton said.

Salton and Wetsell both mentioned the hope that the automation of many services would lead to enhanced customer service.

“People have an interest in having responsive measurement in terms of how their printing jobs are, where they are in the queue, so people  are going to be able to go online and check the status of their print jobs,” Salton said.

The automation also allows the college to obtain data about the use of Post and Print, which would allow Post and Print to fine-tune its operations. Salton said the service would see a huge spike in usage around lunchtime, though as the semester has gone on, such usage has declined.

Yet the data did more than display peak service times. Salton quoted an example of the kind of information the college could now collect.

“What we also know is that once the individuals actually got to the kiosk where they actually put in their ID, it was less than five minutes between when they actually entered their student ID number and when they picked up their package,” Salton said.

The college expects to recoup some of the costs of the reorganization through savings on services such as bulk mailing, Wetsell said.

While the bookstore and mailroom as separate entities had a staff of eight employees total, Wetsell said Ricoh uses a staff of five people.

“They have a tremendous amount of experience in managing services of this nature,” Salton said

Salton said while the new possibilities allowed through the enhanced data collection were exciting, Post and Print was about more than just data.

“It was about serving students  in an improved way,” Salton said. “We’re actually very proud of this.”