Believing in Kaepernick, Nike, the boycott that followed 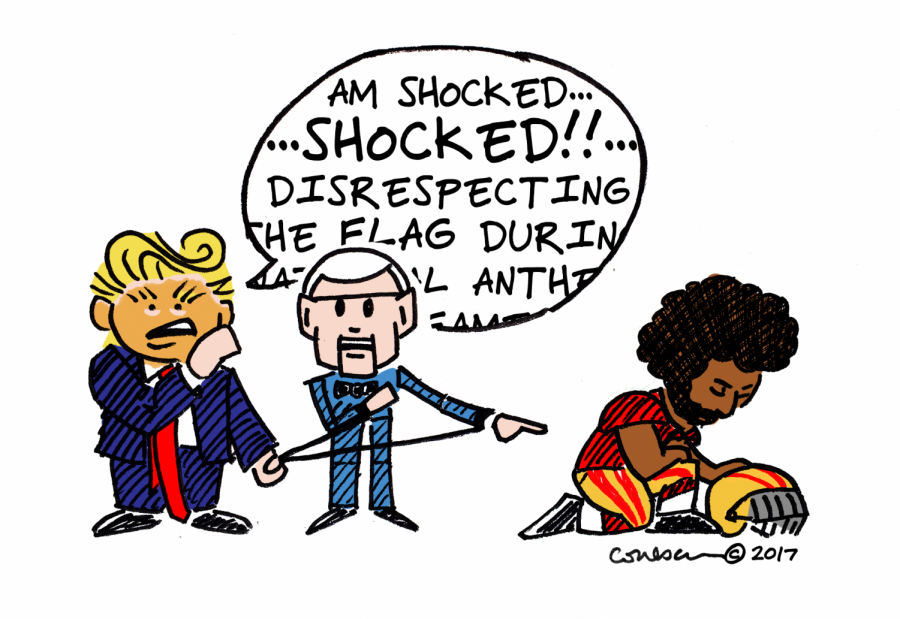 Since first kneeling during the national anthem before his Sept. 1, 2016, football  game, Colin Kaepernick has been a hot topic in the American political sphere. He has been accused of “ruining football” with his political activism by conservative football fans and attacked by President Donald Trump during an Oval Office interview, who called Kaepernick  “terrible” and called for his suspension from the NFL when he kneeled the first time.

Now, Nike has taken a stance by featuring Kaepernick in its new ad, “Believe in something, even if it means sacrificing everything.”

Internet users have expressed support for and opposition to the ad, with some taking their opinions to extremes. For example, sections of the Mississippi police department released statements they will no longer buy any Nike gear, and people have posted videos of themselves lighting their Nike shoes on fire.

There are many different levels to the #BoycottNike trend to unpack.

First, if you are so angry at your Nike shoes suddenly being a political statement, rather than burning them, donate them to someone or somewhere that could use the shoes. Do not rip the swoosh off your shirt, just give it away.

On a larger scale, if you are so against this Nike ad featuring a man who is actively fighting against African Americans being unfairly treated, arrested without cause and murdered by law enforcement that you feel the need to burn your Nike shoes and rip the swoosh off your socks, I recommend looking in the mirror and considering where you stand in the fight for equality.

For instance, many people stopped wearing L.L. Bean after Linda Bean, the heiress to the L.L. Bean company, donated $30,000 to Trump’s 2016 election campaign. A large movement dubbed “Grab Your Wallet,” has a constantly updated list of all Trump supporting businesses and argues that if a consumer supports any of these businesses, they are supporting Trump and his beliefs.

I find that extreme for sure, because some people don’t have the luxury to stop supporting businesses that also sell “Ivanka” brand because all other options are far too expensive. But it shows that everything is political now, in some capacity.

It is time to accept that everything we wear has political connotations. If that makes you uncomfortable, you could become a nudist, but there are definitely some underlying political stances in that movement as well.

Do not get rid of your Nikes because they are suddenly political — they already were, as is everything you own. Understand where you sit politically, and take a stance for your opinions with your words and actions.