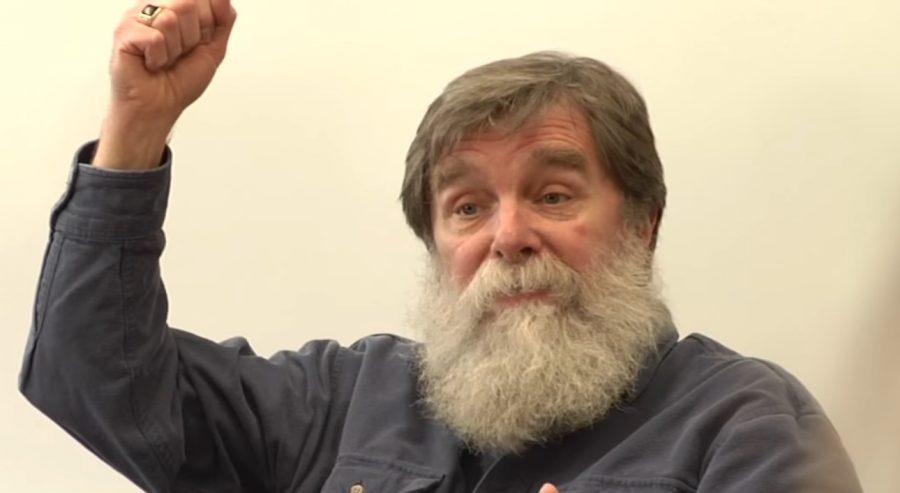 Smith, who taught at Allegheny College for over 30 years, passed away July 13, age 72, after a four-year battle with melanoma.

Eleven students attended the discussion, which was held at 7:30 p.m. in Quigley Hall room 123, a room Smith used frequently for his classes.

“During his life, Professor Smith believed that we honor our teachers by carefully examining their ideas and by challenging those ideas when we find it necessary,” Bloeser said at the beginning of the discussion, reading from prepared remarks. “As Professor Smith saw it, we honor our teachers by striving to develop our own sense of judgement. And that is what we will do together this evening.”

The idea for the discussion, according to Bloeser, came from students involved with the Coalition for Labor. One of these students, Jesse Tomkiewicz, ’20, led the way in organizing the discussion.

Tomkiewicz said he wanted to hold this discussion “to live on the life and legacy of Professor Smith.”

Smith’s final work, a 324-page book titled “The Sense of Injustice and the Origin of Modern Democracy,” was published in June, one month before his death.

By discussing the chapter and by posing these questions, Bloeser said, the group began “crafting the epilogue to (Smith’s) work as a teacher through our discussion of his ideas and the actions they inspire.”

Smith, who worked in a factory before attending college, would often relate political theory to his own experiences, said Jacob Wamsley, ’20.

“He would always talk about, if he built that table, he loves it, he feels a connection to it,” Wamsley said.

Tomkiewicz also brought up Smith’s working-class background during the discussion.

“Doing something monotonously, over and over, he wasn’t able to have that connection between the head and the hand,” Tomkiewicz said.

Bloeser said Smith’s outlook on work as politics was insightful, as most people consider political life to be episodic but think about work much more frequently.

As the discussion wound down, Bloeser steered the group to discuss possible ways of combating what he saw as failures of democracy for working-class people, especially at Allegheny. Bloeser, as adviser for the College Democrats, who lead the college’s Coalition for Labor, tried relating Smith’s work to the treatment of employees at the college, particularly the St. Moritz housekeeping staff.

“One thing we can do is try and cut out the superficiality by talking about it,” Wamsley said.

Emily Scanlon, ’19, expanded on Wamsley’s idea, citing the importance of “putting a face to the budget cuts and the issues at hand, and not only a face, but a story.”

After the discussion of Smith’s work, Bloeser reminded students of the goal of the meeting: to honor and discuss his late colleague.

“When a teacher and friend passes from this life, it is natural to feel sad. It is an important emotion to feel but it is also an easy emotion in which to dwell. We should not resign ourselves to that,” Bloeser said, reading from prepared closing remarks. “When we can, we should channel our emotional energy and do something useful and something good with it. I believe that this is one of the most important lessons Bruce Smith taught during his life and I hope that now that his life has concluded, that we do our best to honor that lesson.”

Correction: This story has been modified to clarify that Allegheny students and Professor Andrew Bloeser helped organize this event. (2:53 p.m. on Monday, Sept. 17, 2018)