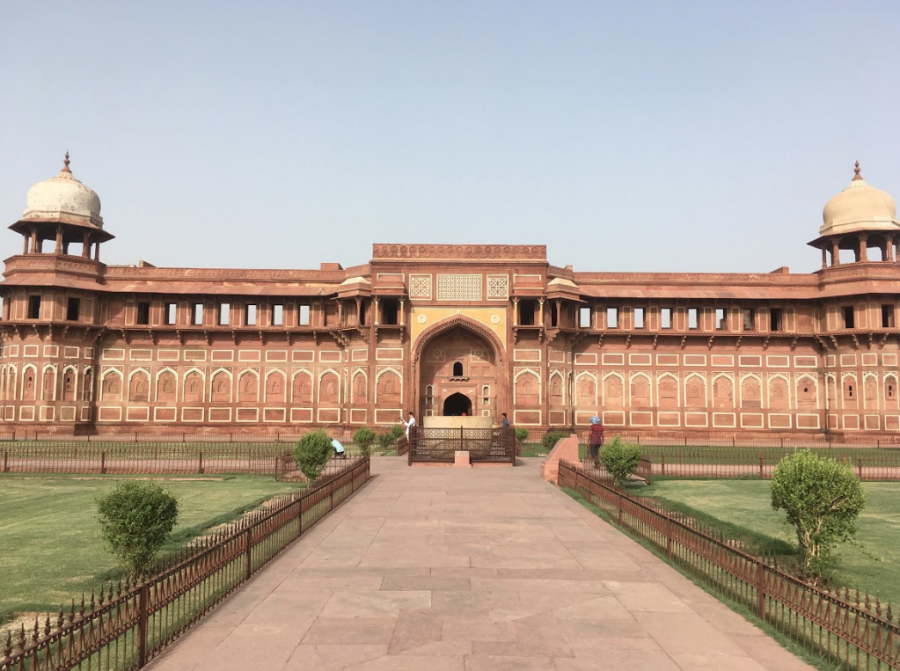 Students on the India Experiential Learning Seminar stopped at Fatehpur Sikri during summer 2018.

This summer I had the opportunity to participate in Allegheny College’s Global Health Department Summer Internship based in Mysuru, India. I was accompanied on the trip by Juvia Heuchert, professor emeritus of psychology, and Lucinda Morgan, director of international education, as well as a handful of other Allegheny students.

We spent a total of eight weeks in India: two weeks of taking classes, touring and traveling to enrich our cultural experience, followed by six weeks of working as interns with Swami Vivekananda Youth Movement at project sites located in Mysuru, Sargur and Hosahalli. Some of the topics for the internships we completed include Ayurveda, Pediatric Nursing Training Modules, Financial Analysis of various NGOs in India and a social media campaign for a nutritional product made by tribal women employed by SVYM.

The first two weeks of our time in India were spent learning about and developing a greater understanding of India, as well as visiting local sites and attractions to expand our knowledge about Mysuru, and India as a country. SVYM brought in local professors and doctors to give lectures. Some of the topics for the lectures included the Indian education system, healthcare in India, water conservation and the socioeconomic empowerment of marginalized individuals.

After classes were finished for the day, employees of SVYM led our group to various attractions in the area including the Mysuru Palace, Namdroling Monastery, Chennakesava Temple and the Bandipur Elephant Sanctuary. After being immersed in southern Indian culture and learning more about the traditions of southern India, we traveled to northern India for five days. We visited the northern cities of Bengaluru, New Delhi, Agra and Jaipur.

We stayed in New Delhi for two days and saw the most breathtaking views, including Humayan’s Tomb, Gandhi Smriti, which is the site of Mahatma Gandhi’s murder, and Qutb Minar. In Agra, we visited the Taj Mahal, the Agra Fort and Fatehpur Sikri, and even attended a demonstration by local artisans where they demonstrated the marble inlay work that is renowned to Agra and is featured on the Taj Mahal.

In Jaipur we toured the Jaipur Palace, the Amber Fort and watched a Bollywood movie at a local cinema. Throughout our time in Northern India, we were further educated about the cultural, architectural and language differences between northern and southern India.

Our internship program through SVYM prioritized the importance of immersing the student interns into the southern Indian lifestyle and work environment. During our trip, we stayed at a hostel with students from other universities, including Cornell University, Mount Allison University in Nova Scotia, University of Michigan, University of Florida, University of Utah and the University of Iowa.

At the hostel, we were also accompanied by Indian students enrolled in a master’s program at SVYM, who we quickly befriended. By hanging out with the students of SVYM at the hostel and talking with them at meals, we were able to learn quite a lot about the Indian education system and the various states in India that they were from. We also shared what our experience as college students in North America was like and how living in India was far different.

The graduate students took us to their favorite places in Mysuru, went to the market with us and even invited us to one of their cousin’s wedding receptions, which we attended adorned in traditional southern Indian wedding attire.

My time in India was incredibly rewarding because I got to form a unique bond with local students and SVYM employees.  I was also fortunate enough to work closely with mentors who assisted me in the completion of my various internship assignments. The projects we worked on enabled us to go on field visits and learn from other employees within our departments.

In Mysuru, I gained invaluable research skills and work experience, was immersed in Indian culture and developed long-lasting relationships with everyone we had the opportunity to meet. My experience with the internship program is something for which I will be forever grateful.  I would not trade it for the world.