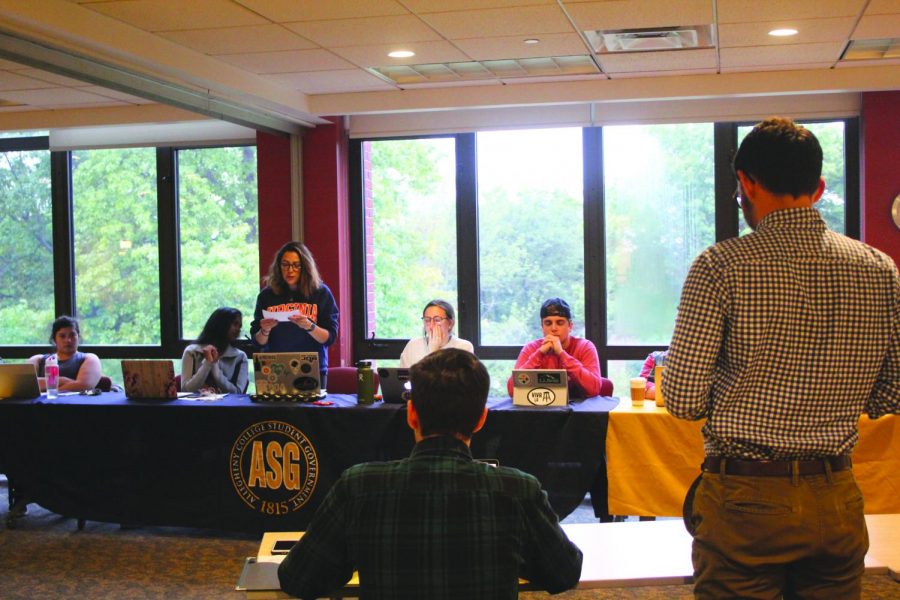 Allegheny Student Government swore in their new proxies and discussed their current finances, constitutions and diversity at their latest general assembly meeting in the Henderson Campus Center Tuesday, Sept. 11.

Along with the proxy discussion, ASG also discussed the first constitution they received from the Allegheny Women’s Club Soccer team. The team was represented by Hannah Kitchen, ’20, at the meeting. The members of ASG could ask any questions they had.

Noah Dawgiello, ‘19,  asked whether an investment into cleats would be necessary.

“You can play in your tennis shoes, so now you have no excuse not to come,” Kitchen answered.

Responding to an email sent to all Allegheny students about a bias incident that occured on campus, ASG’s diversity and inclusion committee gave a report on how they hope to be a part of the solution.

“We talked about having a meeting where all the presidents or their representatives of their organizations would come, and it would be like a town hall,” said Faith Simms, ’19, director of inclusion and diversity. “then we can stop these incidents from happening.”

It was also mentioned that David Roach, ‘21, who updated ASG’s new website will also be helping create a new website for GFC.

Associate Dean for Wellness and ASG adviser Gretchen Beck ended the meeting with a small report on the upcoming Title IX listening circles.

“I forgot the flyer, but Title IX will be doing listening circles, and they’re putting flyers and things up … and we will get that information out to you,” Beck said.

ASG holds its general assembly meetings at 7 p.m. on Tuesdays in Campus Center room 301/302 and its meetings are open to the public. The ASG first year elections are all day Thursday Sept. 13, and Friday Sept. 14. Students can vote on WebAdvisor or are also allowed to vote in the Campus Center at designated tables and laptops. Students were also invited to hear the first year senators speak at 5 p.m. in GFC last Wednesday.