Class of 2022 most diverse, selective in admissions process 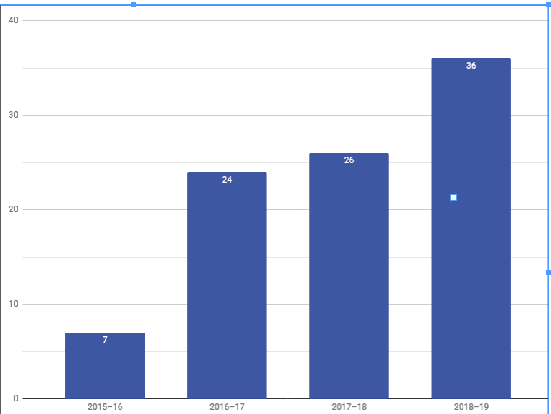 Setting and tying records for metrics measuring the incoming class’ diversity, Allegheny College’s 494-student class of 2022 has been one of the most competitive in recent history.

“We’ve seen that number increase over the years. A couple years ago, we were saying we broke a record, we were over 5,000,” LeSane said. “It’s good to see that that number is increasing with the level of interest in Allegheny.”

Of more than 5,400 applicants, Allegheny accepted approximately 63 percent, LeSane said. A total of 500 students joined the college for Welcome Weekend, and 494 will continue with Allegheny this semester.

Allegheny went test-optional beginning with the class of 2020, meaning students applying for admission in fall 2016 or later would not have to submit an SAT or ACT score. LeSane said the move to test-optional has had a positive effect on prospective applicants, particularly in applicants’ stress levels.

“For students and parents, the standardized tests have become a pressure point,” LeSane said. “I’d argue you have too much weight being put on what someone … did on a four, four-and-a-half hour test, versus what someone did over four years of high school. Being able to tell students that we see them as more than just a test score, I think they really do appreciate that.”

The move to test-optional, LeSane said, is only an extension of the college’s history of judging applicants on a number of attributes outside of standardized test scores.

“It was us confirming what we were already doing,” he said.

LeSane also added that the college’s judging of students holistically allows them to find students who had less than stellar academic records in high school but who show promise in college.

“Our holistic review process continues to be a staple of what we do in trying to not only admit diamonds, but also diamonds in the rough,” LeSane said.

Of the 494 first-years, 28 percent identify as from underrepresented minorities, tying a record set in the 2016-17 and 2017-18 matriculating classes, and 6 percent are international students, setting a new record, according to LeSane. He added that international students represent 36 countries, including Georgia and Myanmar.

The diversity of incoming international students, LeSane said, is a testament to the college’s reputation abroad.

“These are places we’ve not necessarily seen in the past,” LeSane said. “As you look at the increase of our international students, it’s not students all coming from one country or one region.”

Within the United States, over half of the first-year class is from outside Pennsylvania. New York, Ohio, California and Florida fill out the top five, but Massachusetts is not far behind. Allegheny also has first-year students from Alaska, Iowa, Wyoming and the U.S. Virgin Islands, according to LeSane.

The summer melt — the number of students who commit to Allegheny but do not end up coming to the college — was smaller this year, LeSane said. He attributes this to a number of factors, the biggest being summer orientation and its organizers.

“They did a wonderful job in really exposing students and parents to the college earlier (than move-in day),” LeSane said.

Dean of Students April Thompson said this class is special to her because it is her first at Allegheny.

The biggest factors for Allegheny’s recruitment, LeSane said, are the college’s commitment to research, community and interdisciplinary studies. In 2016, the Council on Undergraduate Research ranked Allegheny number one in undergraduate research among four-year colleges.

Yet the college’s recruitment techniques are not based solely on these rankings, according to LeSane.

“We’ve got a great institution,” LeSane said. “When I talk about admissions and financial aid being a part, yes, but it really is a college-wide effort every year when we recruit a class.”