After the apparent suicide of a Romanian nun at Carta Monastery in 1952, “The Nun” follows Father Burke and Sister Irene, who are instructed by the Vatican to investigate at the deceased nun’s abbey. Father Burke and the novitiate Irene enlist the help of Frenchie, the man who found the nun’s body hanging from the window of the monastery’s steeple. As they begin their investigation, they find the abbey is unpopulated — but haunted by an ancient demon who lives beneath its foundation. This fifth installment of “The Conjuring” franchise details the demonic events they encounter.

Before the release of “The Nun,” online advertisements for the film changed from scenes of the movie to a still image of the titular demonic nun with a narrator announcing that the previews were considered too frightening to be aired. According to the narrator, advertisers were asked to pull previews from websites such as YouTube. With anticipation building from the announcement, did “The Nun” deliver on its promise of a movie too scary to be advertised?

Although entertaining, with more than a few frightening moments, “The Nun” is certainly not “too scary” for advertisement and did not warrant the removal of its trailers from websites.

Actress Taissa Farmiga shines as protagonist Sister Irene — her petrified reactions to the haunted abbey balance well with her quiet determination as a young novitiate learning to survive demonic attacks.

While the actress is believable in the role, the character itself is flawed. Her apparent supernatural powers are almost completely unexplained, save for one throw-away line about her special God-given gift, and seem only to manifest when the writers are unsure how to save their main characters.

Father Burke, who specializes in the occult, and Frenchie are not as compelling as Irene. Frenchie seems to exist only as a cliché — he is the nervous, disbelieving character who challenges the beliefs of the protagonists, Burke and Irene.

Directed by Corin Hardy, “The Nun” has beautiful cinematography and is heavily atmospheric, with fantastic set pieces and scenes blocked in ways that naturally build tension. The opening scene, in which a nun sacrifices herself to protect the world from the demon stalking the abbey, successfully builds suspense. 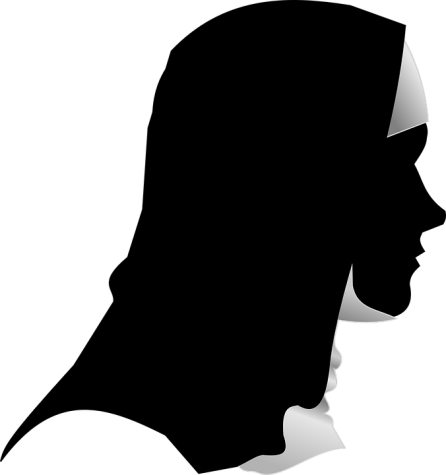 Contributed by Pixabay
Valak, the true name of the demon disguised as a nun, floats through a darkened corridor while a cross slowly turns upside-down. Viewers see Valak, swathed in shadows, as swelling music indicates the demon’s power and malevolent intent. This opening does a fantastic job setting the tone for the movie and establishing Valak as the antagonist.

However, a horror film’s success hinges almost entirely on that antagonist, and while Valak is a chilling presence, once it stops toying with the film’s protagonists and attempts a direct attack, its villainy becomes pointless.

Why, as an ancient demon, does Valak only choke Frenchie into unconsciousness or knock Father Burke aside lightly to only inflict injury? Sister Irene’s power is loosely established, and her connection with God is reinforced throughout the movie, but there is no clear reason why Valak is unable to kill at least one of the three main characters.

The final scene ties “The Nun” neatly into the rest of “The Conjuring” franchise, providing a satisfying conclusion. “The Nun” is not the scariest or most memorable horror movie in recent years but is enjoyable and, most importantly, never dull.

When Valak is not tormenting the film’s protagonists, Hardy’s cinematography beautifully transitions viewers from one scene to the next. The advertisements may have been more frightening than the actual movie, but they certainly were not more entertaining.

And the survival of Irene promises what will hopefully be another interesting installment for the demonic nun.

Short of expectations, By Matthew Steinberg

I wanted nothing more than to be so frightened that I would jump into my girlfriend’s lap, but unfortunately I remained in my seat. “The Nun” was underdeveloped and played on the same conventional scare tactics that have been used in too many recent horror films.

I have nothing against horror movies — or movies in general — that only last 90 minutes. My favorite horror flick to date, “The Devil,” only lasted one hour and 20 minutes but still managed to provide a developed storyline, create dynamic characters and scare the hell out of me.

But too much was happening in “The Nun”. Without much background about Father Burke, Sister Irene or Frenchie, the trio familiarizes itself with the castle, experiences hauntings and discovers Valak is orchestrating the paranormal activity. The group also uncovers the castle’s long, dark history and an ancient relic filled with the blood of Jesus Christ, which it ultimately uses to send Valak back to hell. All of this packed into one movie.

I get it — seeing Sister Irene spit the blood of Christ into Valak’s face to banish him back to the fiery underworld is exhilarating. I definitely left the theater roused and entertained, but also disappointed. As a fan of “The Conjuring 2,” I believe there could have been a more complete story behind Valak’s presence on earth.

Besides the storyline, the scare tactics were typical and overused. Valak as a nun was the perfect antagonist, but its appearances became less terrifying for me when I could predict the jump-scares.

It was roughly the same formula for every frightening moment. The characters were separated for no logical reason — silence filled the room. The space, already pitch black, somehow got darker; the camera panned around once or twice, and then, bang. Valak or another spirit appeared on the screen, accompanied by loud, screeching noises.

I also thought the line between the physical and spiritual worlds was a bit too blurred. At points, it felt less like a possession movie and more like zombies were invading the castle. When Frenchie left the castle on the first night, a spirit dropped down from the trees and was so frantic I thought it wanted to eat him. Toward the end of the film, Frenchie even killed one of the possessed nuns with a shotgun — something I do not recall seeing in most possession flicks.

Do I recommend seeing “The Nun?” Sure. Despite the underdeveloped plot and basic scare tactics, the spectacular shots and acting performances made it entertaining. But I would disregard any accounts of this movie changing the horror genre as we know it.

Too many nuns, By Ellis Giacomelli

It began so well, at the secretive abbey in the Transylvanian countryside. The soundtrack was rich and dark, and the tones on screen even darker.

The monastery setting is a dangerous place, considered by local residents to possess some evil within. But viewers do not leave the monastery or the forest it fades into, with minor exceptions at the Vatican and the United States in beginning and closing scenes.

Spending so much time in the same location becomes boring — the cemetery and halls of the abbey are interesting the first time you see them, but after seeing several shots from the same position, the images grow old.

One exception is the design of the cemetery, in which a bell is fashioned to each headstone and connected to the coffin below to create a sort of safety coffin. Father Burke’s walk into the woods and eventual fall into an open grave is one of the film’s most frightening scenes. The faint whisper of the bell he rings from inside a buried coffin is heard by Sister Irene, whose connection to the Lorraine Warren character of the other franchise films is unclear.

Horror movies are stressful to watch, so some relief from the intensity is usually provided intermittently. While “The Nun” incorporated relief into the story, it unfortunately used Frenchie to do it.

Humor has no place in the horror genre, so Frenchie’s one-liners were not amusing, and the relief could have been more effective in the form of mild dialogue or an extra daylit scene.

I mostly enjoyed the seemingly abandoned abbey, the ringing bells of the cemetery and teased connection between Sister Irene and Lorraine Warren. I can disregard the unfunny relief of Frenchie, but the weak characterization of Valak is a dealbreaker.

Each time the camera shifts from a straight-on shot of one of the characters, to a profile shot and back to straight-on, the nun would appear — the novelty of the appearing and disappearing nun wears off.

Valak should have been the ultimate encounter, but its appearance is not distinct enough from the other nuns who appear in the abbey. In some moments, Valak likely appears in the form of many nuns, but “the” nun looks no more frightening than any of the others.

I wanted “The Nun” to be intensely scary, but the several other nuns wandering between scenes distract from the film’s namesake. The singular “Nun” could have been better.