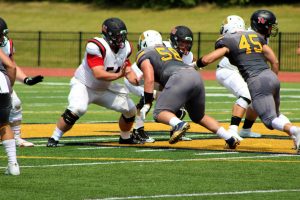 Gator football fell to visiting 25th-ranked Rennsalaer Polytechnic Institute at its home opening game on Saturday, Sept. 1. The 2018 season opener at Frank B. Fuhrer Field ended with a 40-19 loss against the Engineers.

“We were definitely challenged, and I think only positives came out of it as we saw what our team possessed both on the field and mentally,” said Jack Parker, ’22, a first-year quarterback.

The Gators took an early 3-0 lead with a field goal but lost the lead when Engineer Rob Law scored a 30-yard touchdown with 2:15 on the clock in the first quarter. A strong defensive showing and a 65-yard touchdown by Alex Victor, ’20, contributed to a 16-10 score in favor of RPI at halftime.

The third quarter proved challenging for the Gators, who saw the quarter end with RPI pulling ahead to a 23-10 lead.

A 71-yard touchdown by RPI quarterback Rob Law, ’21, increased the lead before another touchdown by running back Joe Scaglione, ’22, with 2:01 on the clock brought the final score to 40-19.

Hammer said the game was a valuable experience for the team — win or lose.

“As a coach, I wanted to see the guys compete against one of the best teams in the country and that’s why we scheduled it,” Hammer said. “I feel confident that we did that.”

The Gators came off a strong preseason and felt confident following scrimmages against Grove City, according to Cody Wendt, ’19. Going into the official season from the preseason preparation, Parker said the team eagerly anticipated the chance to play against one of the most competitive Division III teams in the country.

“We were excited about the possibilities, and we were also really excited that we were going to get challenged,” Parker said.

According to Hammer, the possibility to play a game against a nationally competitive team, regardless of outcome, is a sign of improvement.

“We have not had the opportunity to do that the last two years, so that’s definitely a plus there,” Hammer said.

The team is now looking to focus on conditioning and ball handling as well as minimizing the number of turnovers, according to Parker. Hammer said the team needs to improve its general execution but had a strong opening game and will continue to sharpen their skills.

“Every year, no matter where you’re at, college or NFL, you’re always going to have mistakes in week one,” Hammer said. “So for us, it’s just making the operational things better.”

Gator Quarterback Nazareth Greer, ’21, had his first career start in the season opener and completed passes to nine different receivers.

Wendt, ’19, said he is optimistic about the Gator’s upcoming NCAC Conference schedule opener. Allegheny will face The College of Wooster at 1 p.m. on Saturday, Sept. 8 at Wooster.

“Going against Wooster, we plan to really just go in there like we did against RPI. I have high expectations on being able to easily compete with them. Our defense is strong,” said Wendt. “They’re picked right now ahead of us, but I don’t believe that. I think we’ll come out with a win.” 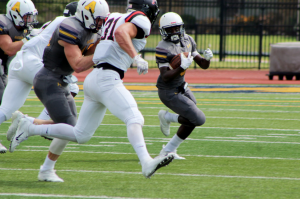 Renssalaer linebacker John Sadak, ‘20, sprints toward Allegheny wide receiver Alex Victor, ‘20. Victor scored a 65 and a 70-yard touchdown during the first game of his third season.