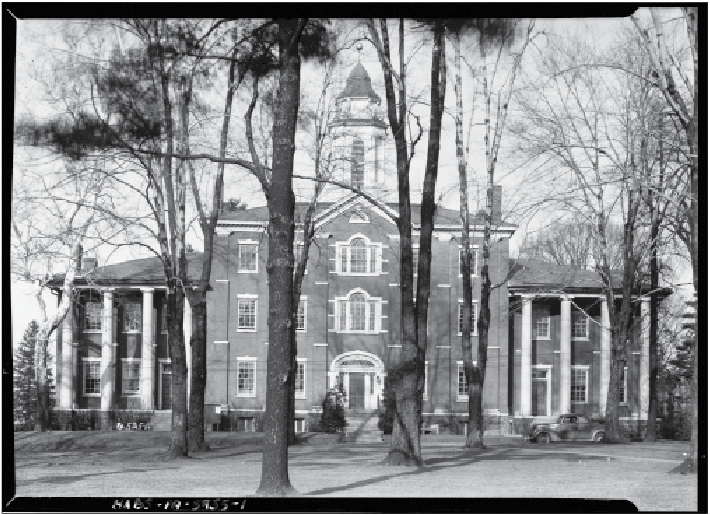 Contributed by the Library of Congress

This photograph, taken by William Bulger in 1937, shows Bentley Hall just a decade after its 1925 renovation.

In its first major renovation in nearly a century, Bentley Hall, the original Allegheny College building, will be renovated to reinforce its structural integrity, restore much of its original exterior appearance and modernize the interior as much as possible.

Cliff Willis, director of major capital projects, said the design phase of the renovation will likely last through the spring of 2019, and the college hopes the building will be reoccupied in August 2020.

Unlike the most recent major renovation of Bentley in 1925, the building will be entirely empty, with all remaining employees moving from Bentley the week of Tuesday, Sept. 4, Willis said. The Registrar, Institutional Development and Title IX have already moved to Murray Hall.

“Bentley is going to be a blank canvas for us,” he said.

Part of the renovation will focus specifically on infrastructure, as the college hopes Bentley, whose cornerstone was laid in 1820, lasts another two centuries.

“One of the things is to make sure of the integrity of the building,” Willis said. “That’s crucial.”

The college also hopes to replace the slate roof, which has been on the building since 1914. Executive Vice President and Chief Operating Officer Eileen Petula said a drone video shot in June by a subcontractor from the college’s contracted architectural firm, MacLachlan, Cornelius & Filoni, convinced her and Willis that the roof needs to be replaced.

Willis said the replacement roof will likely be slate again. Steve Utz, an internship coordinator and adjunct professor who has studied the history and architecture of Bentley Hall, said slate provides many advantages over other types of roofing. Individual slate tiles can be repaired or replaced, unlike asphalt shingles.

Contractors will also look at the load-bearing Doric columns and pilasters on the south side of the building to determine which, if any, need to be repaired.

While a lot of the restoration will be structural in nature, Willis said there will also be a number of cosmetic and functional changes.

“We’re going to replace the infrastructure and completely renew it,” Willis said. “We want to make it a 21st-century building and one that’ll get us through the next century.”

As part of updating the 19th-century building to the 21st century, Willis said, the college is looking into geothermal heating and cooling, better Americans with Disabilities Act compliance — including elevator installation — and an increased number of restrooms.

The potential addition of geothermal climate control, Willis said, is part of a goal to make the building more sustainable. In addition to the possibility of geothermal heating and cooling, Allegheny hopes to add new roof insulation to reduce the need for climate control. New windows will likely contribute to energy efficiency as well.

Willis said the finished project will not only be sustainable, but that the approach to construction will be as well. He said the college identified and worked with contractors with experience with sustainable construction. During the demolition process, for example, the college hopes to reuse or repurpose as many materials as possible, according to Willis.

Allegheny President James Mullen said Bentley is an important building, not just to the history of Meadville but to the western Pennsylvania region as well.

“It reminds us that Timothy Alden and a group of people had the courage to establish a college in what was the frontier of America. … I think that courage shows the best values of Pennsylvania and the best values of America,” he said. “There’s a responsibility to sustain it and prolong it for generations to come.”

In an attempt to retain the building’s historic value, the modern features will be augmented by features of Bentley’s original design.

There are no extant original Bentley Hall blueprints, Willis said. Utz, who has written about and drawn details of the building for the National Park Service, said he has not seen any contemporary drawings or building plans.

That leaves renovation designers limited — but still powerful — data. Drawings and photographs, as well as manuscripts, can inform contractors of the building’s design and its changes from 1820 through 2018.

Willis said the building was not originally painted red, though Bentley saw its first coat of red paint prior to 1900. He said the original windows on the building were six frames over six frames, in contrast to the modern nine over nine design, though he does not know when that changed.

A 1937 photograph of the south of Bentley Hall, taken by William Bulger and available at the Library of Congress, shows most windows with a nine-over-nine design, though the south-facing windows on the third floor still had the six-over-six design.

One goal for the restoration project is to restore the six-over-six windows, Willis said, bringing in a fourth generation of windows.

Another possible change to the building’s façade is the removal of Bentley’s red paint.

Willis said the original façade of Bentley Hall can be likened to the current design of the Tippie Alumni Center. It is constructed of orange brick with a stone foundation.

Because the brick has been covered with red paint for over a century, contractors may encounter issues with removing the paint, Willis said. The paint cannot be sandblasted off due to both the age and original sourcing of the brick; instead, if contractors remove the paint, they will have to do so chemically.

Willis said chemical paint removal poses another set of problems. Runoff is a concern — not only for environmental issues, but also because it poses a potential threat to the Sycamore Tree at the southwest corner of the building, which some believe was originally planted by Timothy Alden, Allegheny College’s first president.

The tree itself is also a concern during the renovation process. Allegheny has hired an arborist to ensure that the tree is kept safe. A number of techniques can be used to ensure the health of the tree prior to renovation, Willis said, but the possibility of harm required the retention of the arborist.

“We don’t want to damage our tree,” Petula said.

The college will not return Bentley to its original usage, which housed classrooms, dormitories and a library, following renovation, but some changes will be found inside the nearly two century-old building.

Petula said there is a possibility of a class seminar room being re-added to the building, which would enhance both students’ experience and Bentley itself.

“I think that would be a wonderful way to have more life in the building,” she said.

In addition to the inclusion of a seminar room, several other major changes will likely come to the college’s oldest building.

The third floor, which has not been used since 1964 due to a lack of egress, may be used again, according to Willis, as there is a possibility the stairs that were originally on the east and west sides of the building will be reopened.

If the third floor is reopened, the “chalk room,” in which graduating students from the 1960s to the college’s bicentennial signed their names and class years, will be repurposed. In that case, Willis said, some portions of the chalkboard graduating students signed may be removed, framed and hung elsewhere in the building.

The bannister going up the center staircase will be raised — it is currently too short to meet building codes, according to Willis — but as the bannister itself is believed to be original, it will remain in the building if possible, Willis said.

Willis also said it may be possible to determine what the original colors of the walls were, and the interior paint may be changed to match.

On the third floor is an intricate crown moulding and ceiling rose, which are currently partially hidden by dropped ceilings. Neither Willis nor Petula said they knew of any other designs currently covered up, but Petula said it would not be a surprise.

“I think history has taught us that, during building renovations, we find a lot of things,” she said.

According to Petula, the Bentley renovation is 100 percent donor-funded. Half of the funds came from Patricia Bush Tippie, ’56, and Henry Tippie who, in fall 2017, made a $7 million challenge pledge, meaning the college is responsible for matching the pledge dollar-for-dollar. Since then, the college has raised $6.5 million, with fundraising continuing for the final $500,000.

The Tippies, who have endowed to the college funds for, among numerous other projects, the Tippie Alumni Center, scholarship funds and a faculty chair, were drawn to the Bentley project by the building’s historic value, Mullen said. The renovation of Bentley is part of the college’s Combinations 2020 strategic plan.

Mullen said the campaign to raise matching funds was not as heavily advertised as past fundraising campaigns.

“We’ve done it quietly because we wanted to make sure it was something we were able to do,” he said.

While the college must still raise $500,000 to complete the matching pledge, Mullen said he has no worries for the campaign.

“Given the enthusiasm we’ve seen, I’m confident we’re going to be able to achieve that,” he said.

The donor-funded nature of this project differs from past Allegheny renovations. In 2016, the college renovated Carnegie Hall through a $1.6 million Richard King Mellon Foundation grant and part of a $2 million Redevelopment Assistance Capital Program grant from the Commonwealth of Pennsylvania.

Allegheny will also not receive any bonds to help fund the Bentley reconstruction, according to Petula.

“This will not be debt-funded,” she said.

Willis said he has spent over a decade vetting architectural, engineering and construction firms for the Bentley renovation, well before he knew it would be happening or his role in it.

When they knew they would be involved with the renovation, he and Petula were quickly able to narrow the shortlist for an architectural firm to four candidates. While in Pittsburgh, they invited these four firms to 30-minute meetings.

“It got us a chance to get a first impression, see … the enthusiasm level and initial thoughts,” Petula said.

Willis said he looked for three qualities in the firms and the “absence of any one of them was a dealbreaker.” The firms had to be professional and competent, had to pay extra attention to staying within budget and had to listen.

After inviting the four firms to campus, the college decided on MacLachlan, Cornelius & Filoni.

Petula said the college followed a similar process for their other contractors. The college decided on Barton Associates for an engineering contractor and the Massaro Corporation as the construction contractor. All three firms are based out of Pittsburgh, another important factor for Willis.

Petula said the college has experienced best results from renovations when the contractors worked together from the start, and Allegheny has ensured this will happen with the Bentley restoration.

“We’re not designing the building and then going off and finding a construction firm,” she said. “We’ve chosen a process that is highly collaborative, where everyone’s involved from the very beginning.”

Those involved with the project are optimistic about its future successes.

“I’m confident we have a really strong team,” Petula said. “It’s proving to be exactly what we had hoped: a collaborative process.”

And for all involved, working on the college’s oldest and most famous building has been a long-term goal.

“We are in the right place at the right time,” Willis said.

Mullen said that, while he will not be president of the college when the renovations finish, he is honored to have played a role in the project.

“I’ll walk out in a week and shut the lights out, and the next time this place is open, it’ll be an incredible building,” he said. “I look forward to visiting it.”