Making memories of a lifetime on experiential learning trip in Italy 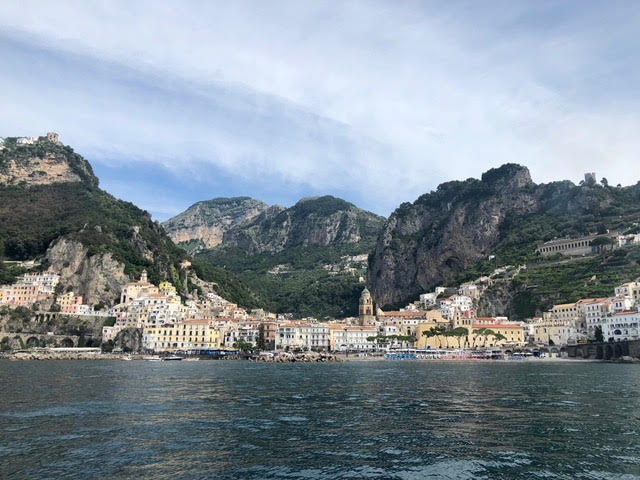 Students on the 2018 Italy Experiential Learning trip were able to explore the Amalfi Coast while traveling.

It was around this time last year that my parents began nagging me to get information about the Italy Experiential Learning Seminar. At that point, they were more interested in me getting to experience Italy than I was. My maternal grandfather, or nonno, was initially from Italy, so I was not completely clueless about Italian culture. That being said, I did not know much. Eventually, I attended an information session about the EL. As soon as I left the room, I called my parents to tell them how interested I was.

Eight months later, I was on my way to Italy, and I could hardly contain my excitement. I had never been to Europe. I was slightly nervous about being in a non-English speaking country, but I was ready to experience the trip of a lifetime with a great group of Allegheny students. During this EL, we traveled around Southern Italy, beginning in Rome.

I will never forget the first night I explored Rome. My friend and I wandered around the city after dinner. After walking around for an hour or two, we decided to head back to the hotel and call it a night. We typed our hotel into Google maps in order to find our way back. After walking for about 30 minutes we saw a structure in the distance that looked oddly similar to the Colosseum.

Neither of us had seen the Colosseum before so we both looked at each other and said, “Hmm, that looks a lot like the Colosseum, doesn’t it?” An Italian man walked past us and laughed, so we convinced ourselves that he was laughing because the ruins were not in fact the Colosseum. Turns out our initial speculations were correct. It was the Colosseum, and we were nowhere near our hotel. It was one of my most hilarious memories of the trip, but in that moment, stumbling across the Colosseum at midnight was not funny at all.

After Rome, we traveled to smaller towns I had never heard of before, and these places ended up being some of my favorites. One of them was an Agriturismo, or farm/hotel bed-and-breakfast combination, in a rural town called Paestum. Not only was the Agriturismo in Paestum visually appealing with a beautiful pool area, a view of the mountains, and vibrant flower gardens, but this Agriturismo had the kindest employees and some of the most delicious food I have tasted in my entire life.

Every night we sat as a class at a long table and were served four-course meals that used only fresh, local ingredients from the family’s farm. Homemade buffalo mozzarella and wine, pasta, you name it, they made it themselves with their own fresh ingredients. I consumed some of the most flavorful meals I have ever had before. I still think about the artichoke risotto I had at the Agriturismo.

One evening after our four-course dinner, I went on a walk with a group of friends, and as we were walking down the road, we saw a shooting star. None of us could believe it. It looked unreal, and it was difficult to believe it was natural. I had never seen a shooting star in my life, and on a perfect evening in Paestum, I saw a beautiful, mesmerizing shooting star. It was a great end to a truly memorable day.

No matter what town we visited in Italy, there were always ruins. Right down the street from the Agriturismo in Paestum, there were beautiful ruins. Going to Italy and seeing ruins that are still standing thousands of years after they were built, really put into perspective that America is a very young country.

In the United States, something seems old if it is from 100 years ago, when in reality, that is not really old at all. Besides getting to travel around beautiful towns, eat wonderful food, taste flavorful Italian wines and gain a new perspective on “old” architecture around me at home, I also made several new friends.

After being back on campus for a couple of days, I have seen almost everyone from the Italy EL. I made lifelong friendships with other students who took part in the EL. After spending three weeks together traveling internationally and experiencing so many new things, it is difficult not to become friends.

I cannot recommend participating in an EL enough. It was a truly great experience, and I am eternally grateful to my parents for persuading me into attending the information session a year ago.