Allegheny student finds a piece of home while in Moldova 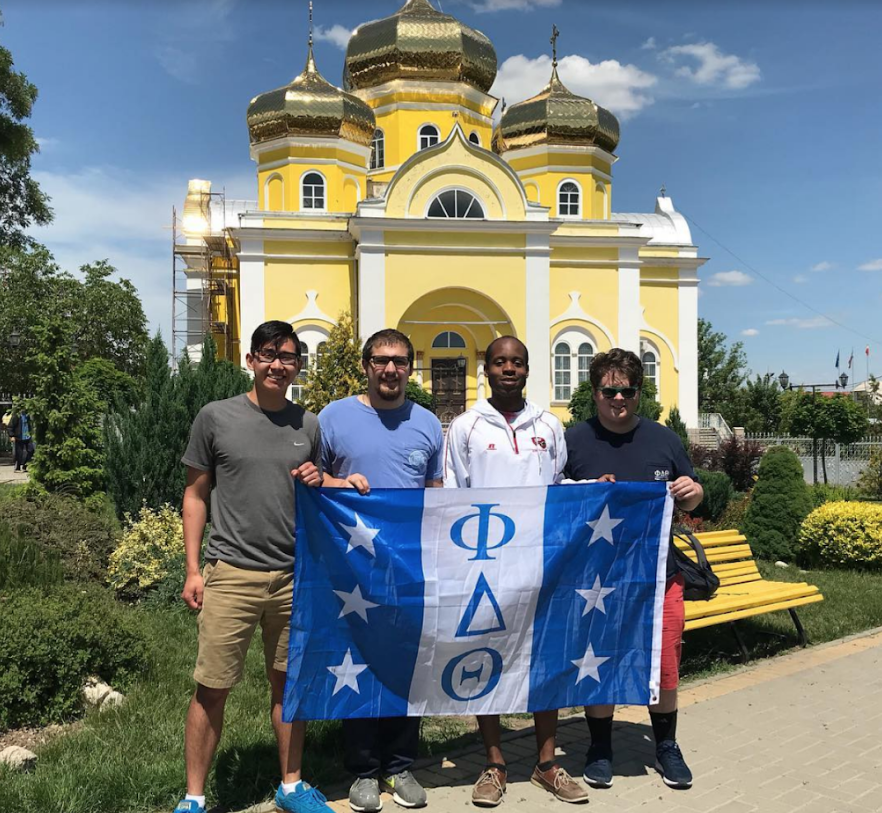 Comrat, a city in the remote region of Gagauzia, Moldova, is home to 20,000 people. The small city is known for its wine production and for being the capital of the Gagauz region.

Visiting the city was a culture shock for an American who had never been to Eastern Europe. Street signs and buildings were labeled in Russian, a holdover from the region’s time as a part of the Soviet Union.

The two hour bus ride my group took to visit the city showed us the Moldovan countryside — dotted with rural farm homes and the occasional Soviet-era monument. On the bus ride, I contemplated the experience of visiting such a remote part of the world. Through Allegheny College’s Experiential Learning Program, this experience taught me both academically and personally.

On our trip to Comrat, we visited Comrat State University in Gagauzia. The small university of 500 students highlighted the stark differences between the higher education systems in Moldova and the United States. The people we met from the university took great pride in the work it did to build a higher education system from scratch, following the collapse of the Soviet Union.

While at the university, we met with a group of American studies students. The leader of the group, RayShawn Gilgore, greeted me like an old friend when I entered the classroom.

Gilgore, a Peace Corps volunteer from Louisville, Kentucky, recognized an emblem on my shirt. As fate would have it, Gilgore was a member of my fraternity while he attended Western Kentucky University. Immediately, we found common ground and began sharing how we ended up in Comrat.

Following graduation, Gilgore joined the Peace Corps,and has been in Comrat for nearly two years. Gilgore studied French at Western Kentucky and hoped to be sent to the French speaking Ivory Coast, in western Africa to teach English, but ended up in Comrat.

Gilgore, however, remained committed to the values of the Peace Corps to promote world peace and friendship around the world. He accepted a position in Moldova despite having no knowledge of Russian or Romanian, the two languages of the country. Peace Corps volunteers are all courageous to volunteer themselves into an immersive cultural experience, but Gilgore’s story was exceptional.

After only three weeks of “basic training,” including brief introductions to the language and Gagauz culture, he was sent to his host family in a rural farmhouse. He told me the first couple weeks were rough, but he soon found his niche in the foreign environment.

After our meeting with the American studies group, Gilgore joined our group for lunch at a local restaurant. Once we left the university building, it became clear to me he was somewhat of a local celebrity.

People on the street would greet Gilgore with a wave, high five or even a hug. Moldova is a country which has very few people of color, and for many people in Comrat, Gilgore, an African-American, was the first person of color they had ever met. But it was not Gilgore’s race that made him popular.

His warm, friendly confidence made him the kind of person who could fit in anywhere. He jokingly referred to himself as the “Mayor of Comrat.” The title suited him well.

At the restaurant, he ordered his meal in Russian while the rest of our group struggled to communicate with the waiter and pointed frantically at the menus. Gilgore had assimilated flawlessly into Moldovan culture. He had made friends, established the American studies group at the university and raved about the opportunities the Peace Corps offered.

The college graduate whose plan was to travel to Africa, ended up in the most remote region of a tiny Eastern European country. His story is a lesson to all students who fear the unknown of post-grad life. Plans are made to be broken, and sometimes, the journeys we least anticipate can be the most rewarding.

Gilgore’s journey from Louisville to Comrat was unpredictable, and undoubtedly, a little intimidating. His story of success made me more confident about my own life. Even if things do not go as planned following my graduation, I can draw on the lesson he taught me and make the most of whatever I am thrown.