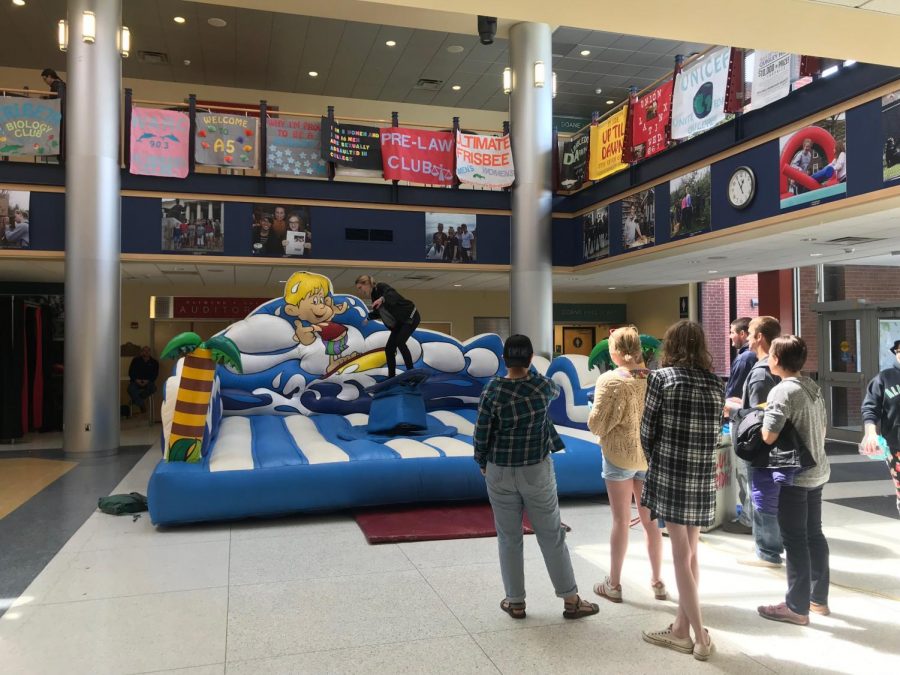 Students try out a mechanical surfboard in the Henderson Campus Center Lobby on Saturday, April 21, 2018.

Life is a beach and you can always count on Springfest to help you have a splashing good time towards the end of the spring semester. Springfest for 2018 was this past week, with the main event on Saturday, April 21, located in the Henderson Campus Center Lobby and the Gator Quad.

“There was the rock wall, I tried it … I really had fun with the, there was also the hammer thing, it was to test your strength. I had fun with that,” Stephanie Swarthout, ’19, said.

Gator Activities Programming and the Major Events Committee were in charge of planning and organizing Springfest. The MEC was a mix of GAP and Allegheny Student Government members with this year’s committee being comprised of the president of GAP, two co-vice presidents of annual events, and four ASG members, according to Jaran Smith, ’20, one of the co-vice presidents of annual events.

Through polling, considering prices and availability of entertainment, MEC voted on a theme for Springfest. The theme of this year being Beach and Carnival, also known as Gym Tan. Gym Tan was a nod towards the infamous “Jersey Shore” TV show to get more people interested in the event.

“There was actually a debate between carnival and beach, and then we were just like, why not both?” Smith said.

GAP and the MEC were also in charge of choosing the featured band to perform at Springfest. The band, Plaid Brixx, was chosen to come perform at Allegheny.

“It’s usually an indie artist, someone who doesn’t really have enough spotlight. From what I’ve come to understand, that’s more like what the Allegheny population is into, those [Grounds For Change] artists. So that’s what we tend to go for,” Smith said.

Plaid Brixx is originally from Columbus, Ohio, and is comprised of founder Chris Duggan, who does vocals and guitar, Mark LeRose on drums, and Jared Sawaya, who plays bass. The group performed some of their popular hits, while also holding a dance contest and a lightsaber battle.

“I think the guy’s enthusiasm was the best, especially during the lightsaber battle, that was pretty amusing,” Natalia Burzeck, ’19, said.

The lightsaber battle performed by Plaid Brixx was one of the reasons why many students stayed to watch the rest of the concert.

“It was really fun, I wasn’t intending to stay for the concert, but once I saw the lightsabers happening, I got really excited,” Swarthout said.

Another part of planning which MEC was involved in was the free T-shirt design. Each Springfest, a free T-shirt is given out, and this year also included bucket hats and sunglasses.

“We had gone through so many beach memes, so many beach memes [and] beach sayings. We could not for the life of us figure out something. But one of them had an idea, they were just like ‘why don’t we put President Mullen on it’?” Smith said.

First, the committee had to get approval from President Mullen to be able to put him on the tank top. The final design did get his approval, after a couple changes.

“When we actually went and showed President Mullen the design, he approved it almost immediately and started laughing,” Smith said.

The T-shirt design was considered one last tribute for President Mullen, according to Smith. When President Mullen first arrived at Allegheny the following Springfest included him on the free T-shirt. GAP thought it would be fitting to send Presiden Mullen off with one last T-shirt with him for Springfest. The other free gifts, the bucket hats and sunglasses, came from surplus funds in the clubs budget.

Though most of Springfest went off without a hitch, there was one bump in the road. Weather forecasts called for rain and cold weather on Saturday, April 21, causing GAP and MEC  to plan to move some activities inside, specifically the featured band to play that afternoon.

“[The weather forecasts] caused us to cancel several things that we were going to bring for the outdoor event. But then the day actually came, it was warm, it’s nice, the sun’s out. We [had] to readjust everything,” Smith said.

Adjustments included re-organizing the activities and food on the Gator Quad, as the concert stage being the Henderson Campus Center Lobby allowed for more room to space out activities. Plaid Brixx ended up performing inside the lobby next to the mechanical surfboard instead of outside in Gator Quad because of these weather concerns and adjustments.

“I’m a little mad the concert wasn’t outside but I think it was a great place, they really pulled it off inside,” Swarthout said.

Despite weather forecasts, Springfest was considered quite a success, according to Smith. With boardwalk games, activities and a live band, students rode the waves of good vibes and fun at Springfest.

“I think it was great because we had wonderful weather this time, so we were able to get outside. I think they had a lot more options in regards to interactions, like the food, with the people, with the band,” Buczek said.