Shooting stars evoke a sense of magic, a sense of wonder and are often wished upon by hopeful dreamers. When one wishes upon a shooting star, they are wishing upon a meteor. Before a meteor is ever wished upon, though, it originates from a different celestial object — a comet.

Every 415 years, the comet Thatcher orbits the sun — no person currently on Earth has ever seen or ever will see Thatcher, at least not as a comet.

As the sun eroded the icy dust of Thatcher, small dust particles trailed behind it in streaks of light, which are visible from the Earth each year as those particles pass through the Earth’s orbit, according to Professor of Physics Daniel Willey.

It is these streaks of light that are known as meteors, Willey said, and can be seen on any given night from a number of different comets. Thatcher’s debris specifically creates what is called a Lyrid meteor shower, an annual display of meteors in late April. 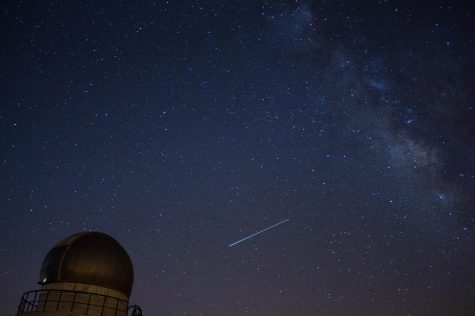 Islam Hassan At bottom center, a meteor from the Lyrid meteor shower streaks across the sky in Cairo, Egypt on April 25, 2015.

This year, the Lyrid meteor shower has been visible this past week, and will be most visible in the early morning hours of April 22 and 23, when the thickest amount of dust passes through Earth’s orbit, according to Willey.

Willey compared the experience of looking up at the sky to witnessing natural events and catching fireflies.

“Why look at the sunrise, you know?” Willey said. “It’s neat to get to see things.”

Meteor showers are often named because their meteors appear to be coming from a particular constellation or location in space. Willey said the annual November Leonid meteor shower, for example, appears to emerge from the constellation Leo.

For the Lyrid meteor shower, “Their radiant — the point in the sky from which the Lyrids appear to come from — is the constellation Lyra, the harp,” according to the NASA Solar System Exploration website.

Six main stars form Lyra’s basic shape, which can be seen here in western Pennsylvania and the Northern Hemisphere from now until the fall.

The NASA Solar System Exploration website addresses misconceptions about the relationship between meteors and constellations, clarifying, “The constellation is not the source of the meteors.”

An additional common misunderstanding about meteors, Willey explained, involves the distinction between meteors and meteorites — a meteor is a comet’s tail of dust burning in the Earth’s atmosphere and visible from Earth, and a meteorite is a larger piece of debris that falls to the Earth, usually from something like an asteroid.

Travis Court, ’18, the 2017-18 president of the Allegheny College Astronomy Club, said he saw his first meteor shower when he was around 9-years-old in Pymatuning State Park in Jamestown, Pennsylvania. Court said that first meteor shower experience was not necessarily the reason he “fell in love” with astronomy, but that he does think about it often.

Court said he hopes to be an astronomer and study computation of stars, which involves combining particles to simulate stars and observe interactions between different simulated stars.

Computation is just one of many areas of astronomical study, and Court emphasized even within computation their are several other subfields. For instance, another type of computation involves studying the interactions of entire solar systems.

“It’s impressive how specific some of the things get,” Court said.

One does not need to be an aspiring astronomer to witness wonders of the universe, however. Both Willey and Court said the Lyrid meteor shower can be seen this weekend if nights are dark and clear.

Court suggested Woodcock Lake Park as one of the best places in the area to see the shower. The shower may also be seen at Robertson Athletic Complex, but Court said the light pollution from the city of Meadville may interfere with viewing there, and Woodcock is likely the better option.

You may not see as many meteors as you might anticipate or hope, Willey said, but if skies are clear, you should be able to see something.

“If you want to see these things, you have to be willing to stay up late, which is not something I’m good at, and be patient,” Willey said.

Area seven-day weather forecasts for April 21 through 23 indicate partly cloudy skies, so viewing conditions may not be ideal, but meteors will still appear to radiate from Lyra even if they are hidden behind clouds. Knowing the meteors are shooting through the sky as one sleeps or prepares for their morning is part of the extraordinary feeling of living within a much larger world.

“I think it’s sort of the same as why we are so interested in the oceans,” Court said. “There’s just so much out there that we don’t know, and space is something that everyone, at some point in their life, they’ve looked up and just thought, ‘Wow, this is incredible.’”