Why Not Us holds Title IX conference at Allegheny

Why Not Us held the Allegheny Title IX Conference in the Tippie Alumni Center on Saturday, April 7.

The conference started with speakers from the Audrie Pott Foundation, named after a fifteen-year-old girl who was sexually assaulted and committed suicide in 2012. Lawrence Pott, her father, Sheila Pott, her mother, and Lisa Pott, her step-mother, all spoke to different aspects of how assault and bullying can affect someone’s life .

While Lawrence Pott spoke about his daughter’s life and who Audrie Pott was, Lisa Pott spoke to how Audrie was abandoned at the party where her assault took place.

“I don’t consider those girls innocent, because by doing nothing they sided with the rapists. Their silence helped the offenders, so Audrie’s friends were guilty,” Lisa said.

Lisa then spoke about how bystanders can intervene when a potential situation arises.

“It’s important to have a plan in your head of what you could do [to prevent a sexual assault] or how you could intervene,” Lisa said.

She suggested creating a distraction or asking someone else to intervene.

“If the situation is very obvious, you could also use the direct approach and physically remove that person from the situation,” Lisa said.

Audrie’s mother, Sheila, spoke about how her daughter’s sexual assault and the cyberbullying that occurred after the incident led to her suicide.

“As the rumors spread she was slut shamed and her friends turned away from her. She felt alone,” Sheila said.

Pictures of Audrie’s assault circulated throughout her own and neighboring school districts during the week leading up to her death.

The Audrie Pott Foundation ended its portion of the program by showing a memorial video filled with pictures and videos from Audrie’s childhood and teen years.

Speakers from Allegheny’s Title IX office, Women’s Services and a sexual assault nurse examiner took questions from students and others who attended the Title IX conference.

During the conference, the relationship between the Title IX office and Women’s Services was highlighted. Both organizations explained their connection to one another.

“The other thing that I heard this year, that I wasn’t anticipating, is that there is some sort of adversarial relationship between Women’s Services and the Title IX office, and that can’t be further from the truth. I rely on Women’s Services very much. We want students to get the support they need while going through the process,” said Title IX Coordinator Gilly Ford. 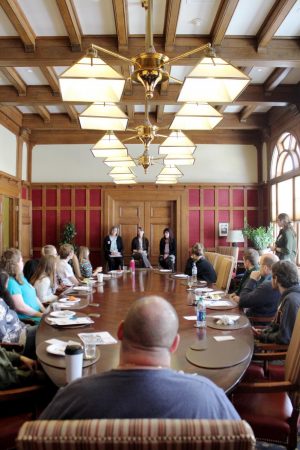 Representatives from Allegheny Title IX and Women’s Services take questions from students and guests during the Title IX Conference in Tippie Alumni Center on Saturday, April 7, 2018.

Women’s Services Advocate Meg Lenherr works with all of the students from Allegheny College who seek counseling at Women’s Services and explained her role. She said she is available to help with the Title IX process.

“I’m actually in a really unique position. While I’m a confidential resource and can provide confidential counseling, I can also provide advocacy as well,” Lenherr said.

The Title IX conference ended with a discussion led by Michael Broussard, a theatre artist and childhood sexual abuse survivor.

With Broussard’s background in theatre, he told his story by emotionally portraying what it was like to grow up with an abuser and stopped periodically throughout the story for questions and comments from the audience.

Broussard has been performing his show, “Ask A Sex Abuse Survivor,” since 2014 where he portrays what it was like to grow up with a step-father that doubled as his childhood sex abuser.

He said he finds the process of performing every show as “healing” for himself and audience members, which is why he continues to do what he does.

Broussard’s show and discussion left many in the room with tears in their eyes and comments applauding his strength for being able to tell a room full of people his very personal story.

Throughout this past week,  Allegheny’s chapter of Alpha Delta Pi tabled to raise awareness for sexual assault in the Henderson Campus Center lobby. Their tabling was titled, “Consent is…” Each day had a different activity that helped bring awareness to sexual assault survivors. 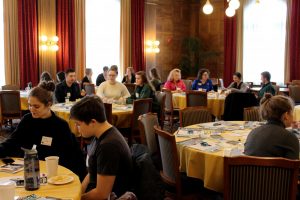 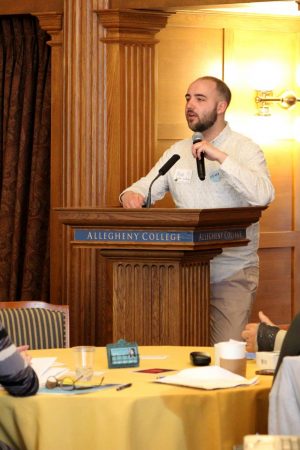 Kelsey Evans Why Not Us Co-President Mark Myers, ‘19, thanks students and guests for coming to the Title IX Conference in Tippie Alumni Center on Saturday, April 7, 2018.

Later this month, Women’s Services will be holding a presentation on sexual assault on Wednesday, April 18 at 7 p.m. in Schultz East Alcove and a Take Back the Night March will be held on Friday, April 27.