‘Ready Player One’ invites audiences into the game world 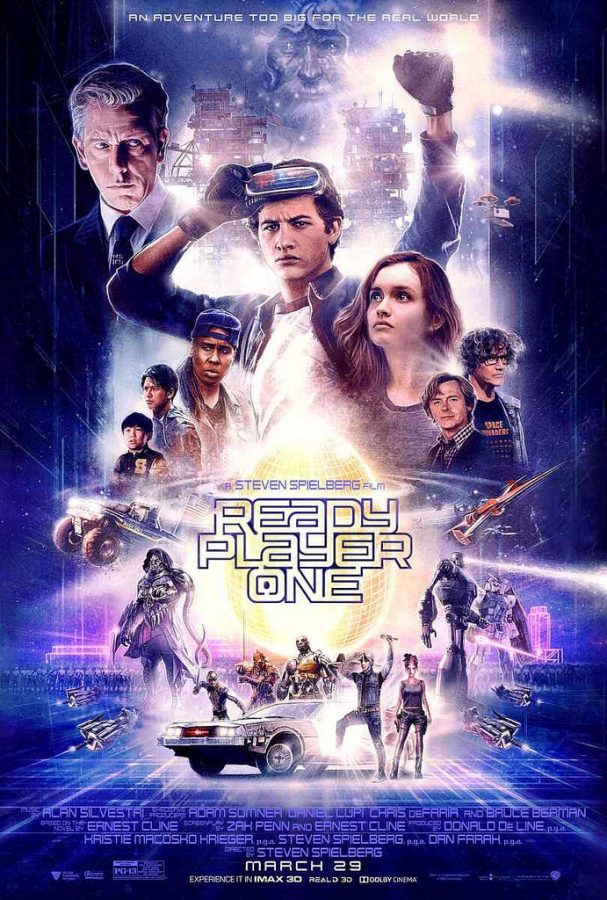 The movie of all gamers dream, “Ready Player One” is an engrossing science fiction adventure into the wonders of virtual reality. Directed by Steven Spielberg, the film is based off the 2011 book written by Ernest Cline. The film had an impressive run time of two hours and 20 minutes and was released on Friday, March 30.

The film is set in the dystopian world of 2045, where people can escape reality by entering into the Ontologically Anthropocentric Sensory Immersive Simulation. OASIS is a virtual reality where you can do anything, go anywhere and be anyone you want. You can go to school, lose all your money in a casino planet, visit Minecraft World or fight to the death on Planet Doom. The virtual society is a massive multiplayer online role-playing game and people spend more time in OASIS than in the real world.

What starts off the movie is the death of James Donovan Halliday, the creator of OASIS. After his death, a video appeared which showed Halliday had hidden an Easter egg in the game and whoever found all three of the hidden keys in the game would find the egg and become the new owner of OASIS.

For those who do not know, an Easter egg, and not the ones from the Easter bunny, is an inside joke or hidden message in a work, usually in video games or films. It is always fun to try and find Easter eggs in games or movies, and this film is one big Easter egg hunt.

And like every video game, the group is sabotaged at every turn by the villain of the movie, Nolan Sorrento. Sorrento is the owner of Innovative Online Industries, which plans to take over OASIS and monetize it. Like Parzival says, he is kind of a jerk and lacks any popular culture knowledge, which is super important to the game. Sorrento and IOI are the evil overlords of the internet and OASIS.

The plot of the movie flows a lot like a video game plot would. It is a bit basic, lacking anything too deep, but it flows well. The plot gets the job done, you get from point A to point B without getting lost in any weird or unnecessary subplots. To put it bluntly, the main quest of this movie is to find the Easter egg Halliday hid in OASIS. There are no side quests, unless you count the “get the girl” mission for Parzival, but even without them the movie gets by.

Despite its flaws, the film will have you on the edge of your seat at times. It has the witty one-liners, pop culture references and all the gamer lore you could think of. And it has cameos of popular video game and movie characters. You see Batman and his bat family, Joker and Harley Quinn, Halo characters, the Teenage Mutant Ninja Turtles, the Iron Giant and my personal favorite, Chucky.

The film shows the fun of virtual reality that is balanced by a harsh world, filled with hilarious characters and pop culture galore. While the film is not something to be revered, it is still a pretty good movie. “Ready Player One” shows the fun and adventure that video games provide but also shows us that we cannot spend all our time in a video game.