Parker manages to maintain the balance between athletics and Allegheny academics 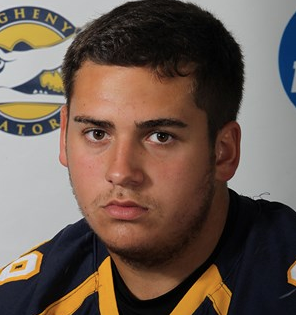 Allegheny College has been long been recognized for its academic rigor around the nation. By being one of the most rigorous institutions in the United States, Allegheny students are forced to pay particular attention to their academics. Yet, a portion of students at Allegheny compete in varsity sports making their already busy schedule even more hectic.

Noah Parker, ’21, is one of those students. Parker is a first-year student from Hermitage, Pennsylvania and is a defensive lineman on the football team and a thrower on the track and field.

When deciding which college to attend, Parker knew he wanted to attend a school where he could play two sports.

“I knew right out of high school I wanted to play two sports in college,” Parker said.

Just like many student-athletes at Allegheny, members of the football team have a full schedule of practices and workout sessions.

Balancing a full football schedule along with the rigorous awcademic workload Parker said, “It was definitely difficult but manageable. As long as I didn’t procrastinate I was good,” Parker said.

The spring semester does not bring any extra free time for Parker but rather makes his schedule even more packed. In addition to classes and football, Parker has added track and field activities to his schedule.

With daily practices and weekend meets Parker said, “time management is definitely difficult, but I think I can do it.”

Despite the heavy workload, Parker said he continues to thrive on and off the playing field. During the indoor track and field season, Parker set a personal best in the shot put and placed at multiple meets.

In football, Parker’s teammates are taking notice of his attitude and determination.

“Noah comes to practice with the attitude to get better every day,” Marcus Davenport, ’19, said. “He’s always trying his best to make others around him better.”

Parker said his goal is to continue playing both sports throughout his time at Allegheny.

“I feel like I can do both throughout my career at Allegheny,” Parker said. “My goal is to have a 3.0 GPA during my time at Allegheny.”

Student-athletes at Allegheny College have an incredibly difficult challenge to manage both academics and athletics. Noah Parker is just one example of that.