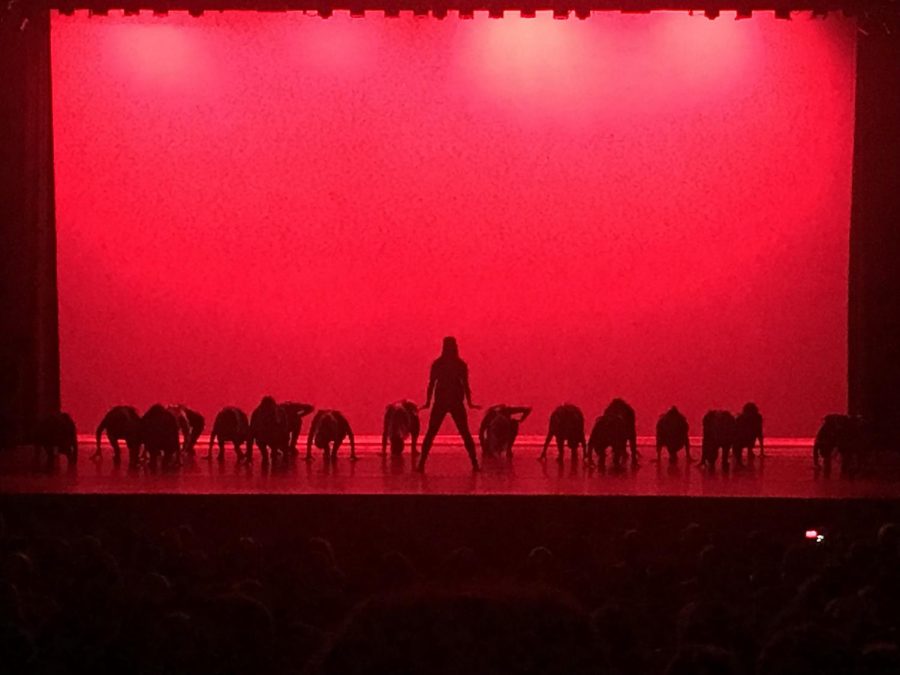 The Allegheny College Dance Team performs to a music mix at the JaDE Benefit Concert in Shafer Auditorium on Saturday, March 3, 2018.

JaDE, the organization behind the concert, is a student choreographed dance group which is affiliated with the Allegheny Dance and Movement Studies program. The group performs for Allegheny events as well as other local community events. Sophomores Katelyn Perroz and Rachel Lynn were the concert chairs for the benefit concert and were responsible for managing the performance. Perroz is also the vice president of  JaDE, and Lynn is the historian.

“We’re the overseers of the rest of the concert board, and we just set deadlines for everyone to have their duties done by,” Perroz said.

Lynn and Perroz are the main supervisors over the concert planning and coordinate with the other board members and the Crawford County Special Olympics.

“We helped the other concert board chairs whenever they needed assistance with something, making posters [and] painting the windows,” Lynn said.

“My job is to reach out to all of the JaDE members parents and family, as well as organize everyone to go to businesses downtown, and we also take information on sponsoring, or we look for donations for our raffle baskets from local businesses,” Beacom said.

“Our raffle table is one of our biggest things to get money from the day of the concert. I think this year we made almost $1,000 just in raffle,” Beacom said.

The money raised through fundraising before and during the concert are given to the Crawford County Special Olympics each year. This year JaDE was able to raise approximately $3,000 for the organization.

“The actual JaDE board will pick dates for the concert and schedule the auditorium. [The JaDE board] did that over the summer and then after the concert board is elected we switch it over to them to do the rest of the planning,” Perroz said.

Within the concert, JaDE is one of the main groups to perform multiple pieces. JaDE usually has about two to three months to plan and practice performance pieces in advance, according to Beacom.

“JaDE performs three dances each year in the concert, and one of those dances is also performed at the Cookies and Milk performance in December. Then, we perform two newer routines in the concert also,” Perroz said.

JaDE members are allowed to put forth individual piece performances. The senior members of JaDE usually do a piece, according to Lynn, and the tap dancers got together and did a piece for this year as well. The senior piece was titled “You Can Come Back Home” and was choreographed by seniors Devin Beacom, Danielle Higbee, Emma Highland, Carissa Lang and Gavrielle Winer.

Besides JaDE, other groups are also invited to submit pieces to perform at the concert. The concert usually has the Allegheny Dance Team, pieces from the previous Orchesis performance, and local studios, some which are located in Erie, Pa. JaDE also has a good relationship with the Allegheny’s Women’s Rugby Team and usually invites them to perform at the concert, according to Beacom.

“Sometimes they perform in our concert. They do their [Students for the Awareness of Multiple Sclerosis] routine in our concert but this year they didn’t because SAMS was after the concert so they didn’t want to do it before. But they also help a lot with volunteering if we ever need help with anything,” Perroz said.

The concert showcased the Allegheny College Dance Team and the Dance and Movement Studies Ballroom three class. The college dance team performed a mix of Beyonce, BTS, Cardi B and UNK which was choreographed by Brittany Claasen, ’20, Dai’Quan Day, ’20, Julia Foltz, ’19, and Britiny Hubbard, ’19. The Ballroom class performed a part of one of their newer pieces which will be shown in the Spring Dance Concert in early April. The piece was named “Look” and was choreographed by Betsy Sumerfield, an instructor in the Dance and Movement Studies program.

The concert showcased multiple dance performances, helped raise money for the local special olympics organization, and was considered a success by the concert board.

“This year, according to our adviser, was our largest turnout we’ve ever had for a concert. Which is insane,” Beacom said.