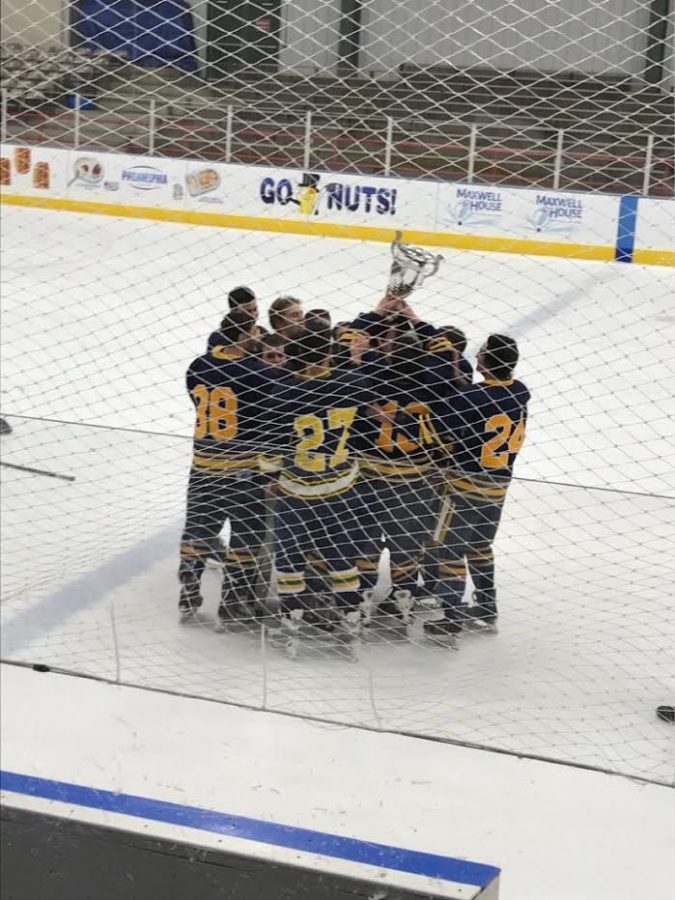 The hockey team celebrates its win against St. Francis University on Saturday, February 24, 2018. 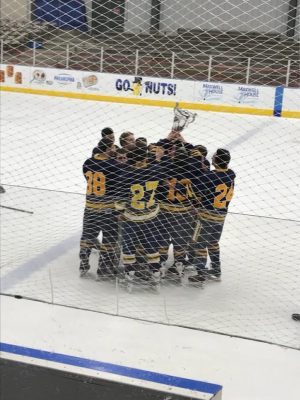 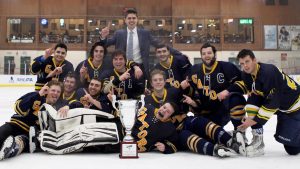 The 2017-2018 season was a historic one for the Allegheny hockey team. The Gators returned only three players for the 2017-2018 season and were concerned about their ability to even field a team according to assistant captain, Trent Faulkner, ’20.

“We worked hard all season, and we were able to do something special after three rough seasons,” Trevor Gant, ’18, said.

The Gators finished the regular season with a record of 4-4, with all four losses coming from the two teams they faced in the playoffs.

“We had some struggles during the season, being beaten by the two teams we faced in the playoffs twice already,” Christian Lussier, ’21, said.

Lussier made the transition from roller hockey to ice hockey this year to play for the Gators.

With an influx of first-year players, the team gained new life made the league playoffs for the first time in 14 years and captured their first College Hockey East M5 Championship.

“We came together and overcame the odds even though we were never thought of as a playoff contender,” Faulkner said.

The team entered the playoffs as the third seed out of four teams. In the semifinal game, the Gators took on the second seed, the Wooster Fighting Scots.

The Scots and Gators battled for three periods with Allegheny breaking the 2-2 tie, with only six minutes left in regulation to win with a final score of 3-2.

With that win, the Gators advanced to the championship game where they took on the number one seeded St. Francis University Red Flash, who defeated Pitt-Bradford with a score of 12-3 in their semifinal matchup.

“Once the playoffs started is when we really banded together and started playing our best hockey,” Lussier said.

The Gators beat St. Francis with a score of 10-5, securing their first ever College Hockey East M5 title.

“Winning the championship made all the long drives, late-night practices and hard work worth it,” Lussier said.