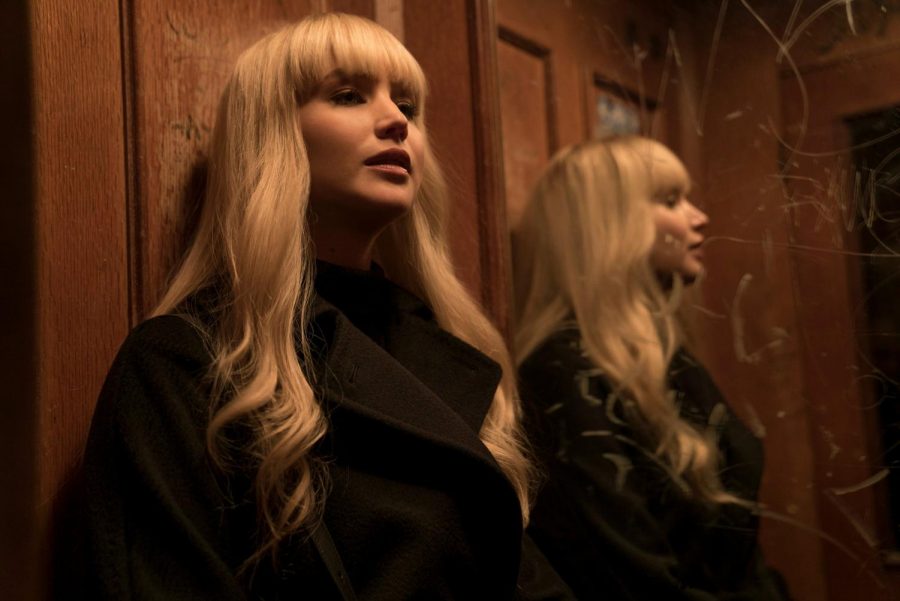 Filled with brutal torture and bloody violence, “Red Sparrow” barely delivers an original spy film. The R-rated thriller was released on March 2 and saw a recurring team up of director Francis Lawrence and actress Jennifer Lawrence, who both worked on The Hunger Games trilogy. Focused on Russian and American spies, like almost any other spy movie, this sparrow is having a hard time leaving the nest.

Despite “Red Sparrow” being released a few weeks after the record breaking movie, “Black Panther,” the movie still falls short in creating a substantial box office score. The movie only generated 17 million dollars over opening weekend and does not look like it will make much more.

Speaking of Marvel movies, anyone else want to mention the Black Widow vibes we got from the trailer? I cannot be the only one who thought this was like the origin story of Black Widow. Both were ballerinas, both were trained by the Russian state to be spies and assassins in special programs — the Sparrow program and the Red Room respectively — and both turned against Russia. It is too similar not to mention. Though I do have to say, I would have rather seen Scarlett Johansson than Jennifer Lawrence in a Russian spy movie, Marvel or not.

Like most generic spy movies, and as I mentioned before, “Red Sparrow” focuses on Russian spies after the Cold War. The movie follows Dominika Egorova, played by Jennifer Lawrence, as she goes from prima ballerina to a trained spy of the Russian state.

The movie is based on the book published in 2013, written by former Central Intelligence Agency agent, Jason Matthews. “Red Sparrow” is the first book of the Red Sparrow trilogy and is followed by “Palace of Treason” and “The Kremlin’s Candidate.” I would not be surprised if they attempted to make sequels to the movie, though it all depends on how well this first film does. I would not be opposed to a female-lead spy trilogy, since we do not have many of those. Scratch that, we do not have anything like that.

Besides Lawrence, Joel Edgerton plays the American CIA agent, Nathaniel Nash and Matthias Schoenaerts plays Ivan Egorov, the uncle of Dominika. These are the only significant characters in the movie besides Dominika. A lack of important characters is one of the factors as to why many disliked the movie.

The movie has received a 49 percent rating on Rotten Tomatoes, and many critics do not have positive things to say. I admit, it was not the greatest female spy movie I have ever seen, we only have three female-led spy movies pre circa 2000. “Red Sparrow” is following after “Salt” and “Atomic Blonde,” two female spy movies which were also not entirely well received by movie critics.

While there are awful reviews, “Red Sparrow” was not that bad of a movie. Other than the stilted characters, the plot moves like a complicated puzzle which completes itself at the end quite nicely. You will be left questioning some things but it will not leave you hanging and cursing up a storm at such awful screenwriting.

I will not spoil them, but there are two scenes in the movie that bring the whole film together. I did not see the big reveal coming. In spite of all the evidence in previous scenes, I would have never guessed them and only made the connections afterwards. Granted this might have been because I got so caught up in some of the middle scenes which have nothing to do with the reveals, but I was still caught off guard.

I believe the main issue with this movie was in part the characters. While Jennifer puts on a good show as a killer spy, the transition from prima ballerina to trained spy is shaky at best. There were some unnecessary scenes that could have been replaced with character development. The other characters are barely given enough screen time to hash out a stable personality, let alone create a relationship with Dominika.

While “Red Sparrow” is the type of female-led spy movie and potential trilogy we need right now, the movie falls short in giving us the brutal and thrilling spy drama we want. The movie delivers blood, violence and action but fails to give a compelling narrative on a female spy. I think I will be waiting to celebrate a female spy movie when Marvel releases a Black Widow film.