Guests gather to celebrate and honor the life of Allegheny employee 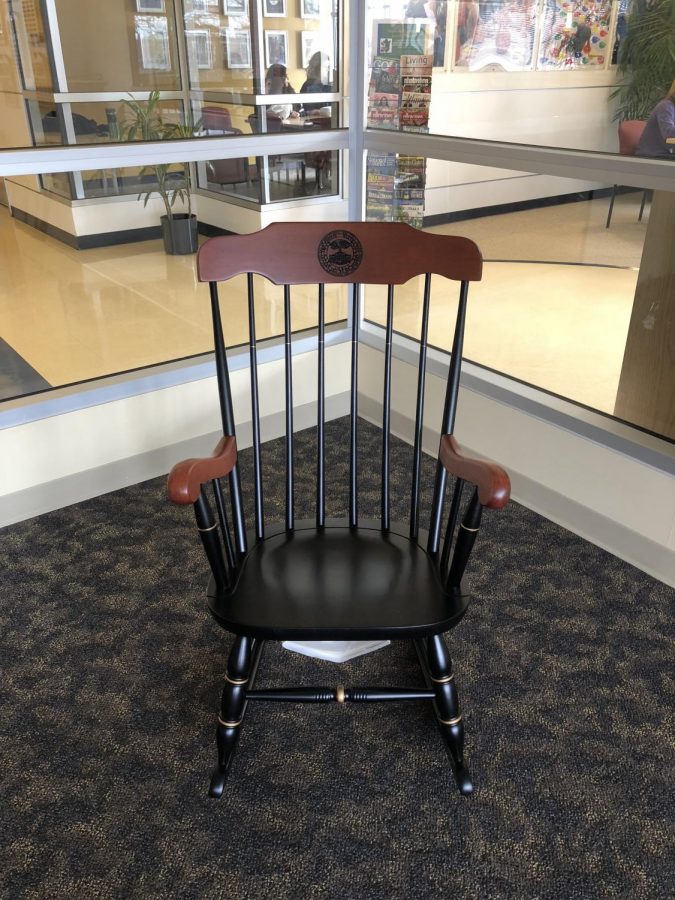 A chair with the phrase “be somebody who makes everybody feel like a somebody” on the back, dedicated to the memory of Pamela McCurdy is displayed on Saturday, March 3, 2018.

On Monday, Nov. 20, 2017, at 10:59 p.m., Registrar, Associate Dean of Students and Associate Professor of History Ian Binnington sent an email to the Allegheny community informing them about the passing of Pamela McCurdy, who worked as transcript coordinator in Allegheny College’s Registrar for nearly two decades.

Friends, family, students and colleagues came together almost four months later on Saturday, March 3, 2018 to celebrate her life. Those who attended the reception in the Henderson Campus Center shared their experiences and favorite memories of Pamela with one another.

“We met in 1983, her birthday is July 16 [and] mine is the 18. We went out on a date July 17. She was two days older than me, and a year later, we got engaged on July 17,” Ed McCurdy, husband to the late Pamela, said. “I worked with her a couple years at Street Track and Trail, where we met, and then she started here at Allegheny College.”

During the reception, Ed spoke about the life they shared together and shared fond memories with attendants. The couple valued time they spent with family, which includes their three children.

While Pamela frequented family events like her youngest son Jordan’s high-school hockey and lacrosse games, she also picked up Ed’s favorite hobby of car shows and drag racing. She loved the students she interacted with and wanted to make everybody, especially the students who were far from home, feel special, according to Ed.

A slide-show projected pictures from Pamela’s life during the reception. Many of the photos showed her in the  family situations Ed described throughout the reception, while others were from childhood. Community members were also offered ice cream cake, since it was her favorite dessert for special occasions.

“I think it was just a good time for the community to come together and for folks ,who had gone to the funeral, this gave them a chance to just check in [with the family] and see ‘how are you doing?’’’ Allegheny College Chaplain Jane Ellen Nickell said. “It was kind of nice that people who saw them around the time that she died could follow up and just check in with how they’re doing now.”

Pamela passed away the Monday before Thanksgiving, so the funeral service was held that week. The reception in the campus center was not meant to be another service, but rather a casual gathering that gave the college a chance to remember Pamela. It also reminded her family that they are still a part of the Allegheny community as well, according to Nickell.

The large meeting room was cleared out except for chairs that lined the walls. Yet people rarely sat in them, and many were covered with bags and coats as individuals walked in all directions, creating a space with a constant, but not overbearing flow of conversation.

In the back of the room, a lone chair sat quietly amongst the group. Occasionally, Nickell or Ed walked back with one or two guests and showed them a phrase written on the back of it.

“Be somebody who makes everybody feel like a somebody,” the quote read.

“That was from her office,” Ed said, “there were a couple of ladies that said they were involved in that because she always made everybody feel like a somebody.”

The quote represents her warm attitude that was  always recognized and appreciated by colleagues in the Registrar’s office, according to Binnington.

“She always had a smile on her face. She was always seeing the positives, always looking for the best in people, always reminding you to look for those things. I think she made the workplace better,” Binnington said.

Pamela brought this positive impact to the workplace for as long as her co-workers knew her, according to Binnington.

Binnington spoke about the duties and responsibilities she had as transcript coordinator, and highlighted how Pamela handled such a stressful position with a warm and friendly attitude on a daily basis.

“She, probably more than any of us, interacted with current and former students on a daily basis who wanted transcripts,” Binnington said. “Once she started to get sick, and once other people had to start doing her job, we started to realize just how hard it is to do that sort of consistent customer service type role.”

The position involved working with people on deadlines, fixing issues with technology and a number of other responsibilities. Despite the stress the job produced, especially when something went wrong, Pamela always had a smile on her face, according to Binnington.

Pamela’s enthusiastic presence has impacted countless lives in the workplace, with family and even with individuals she did not know, according to Binnington and Ed.

“She always made everybody feel like somebody. If they had a bad day, she’d try to change that for them,” Ed said.