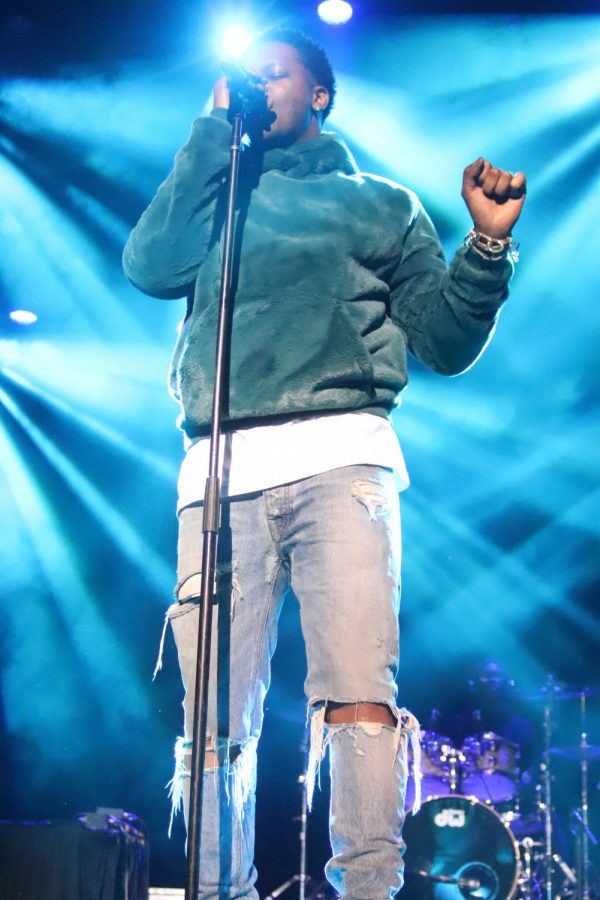 BJ the Chicago Kid performs during the major concert on Saturday, Feb. 25, 2018, in Shafer Auditorium.

The original lineup featured SMINO and the main act, BJ the Chicago Kid. BJ the Chicago Kid is a singer and songwriter who has worked with Kendrick Lamar, Chance the Rapper and Schoolboy Q. Despite working with big name artists, many Allegheny students did not recognize the artist and did not buy tickets for the concert. Akeem Adesiji, ’20, a volunteer for the concert, was selling tickets before the concert and commented on the lack of sales.

“A lot of people who didn’t know that we were having a concert, didn’t know who it was that was performing, but when I started explaining it or when we had music playing, people started taking interest and said they would maybe buy a ticket later,” Adesiji said.

However, the concert on Saturday included a new line up. SMINO, one of the opening acts, was taken off the concert line-up due to missing his flights to make the concert. SMINO was replaced by Aaron Carter, who was one of the backup artists in case of cancellations. Carter is a pop and hip-hop artist, who also starred in the Disney Channel show “Lizzie McGuire.” Once Carter replaced SMINO as an opener for BJ the Chicago Kid, Allegheny Student Government saw a rise in ticket sales.

“I would say hundreds of people bought tickets after the fact Aaron Carter was announced,” Valerie Hurst, ’18, said.

“When we got Aaron Carter we saw a spike in ticket sales again. It was a decent crowd for the opening act scene and Aaron Carter,” MacStudy said.

Despite the announcement of a new and familiar artist in the concert lineup, Hurst and MacStudy thought the crowd was lower than previous concerts.

“I think it’s been lower this year then in previous years. And that can be due to the fact,  artist choice, people just not feeling like they want to come to the concert, time of the year. It was a little bit lower than expected,” Hurst said.

“There were about as many people as I expected there. My expectations for the concert weren’t huge,” Adesiji said.

The concert, after the line-up change, also encountered an unexpected hiatus in between the sets of Aaron Carter and BJ the Chicago Kid. There was a 40 minute time lapse as BJ the Chicago Kid went on errand and returned late for his performance.

In spite of some minor setbacks, Hurst and MacStudy thought the concert was successful.

“I think it went well. I saw grown men screaming at the sight of Aaron Carter. I saw everyone from every class. I saw a lot of upperclassmen having a really, really good time and that’s really what we want to see, to take away from a concert, people from fraternities, sororities, non-greek life, sports and every single class mixing and coming together for the concert and having a good night,” Hurst said.

ASG and GAP are the two groups who handle the planning behind the major event concert. The two organizations collaborate together to organize and fund the major concert. They met weekly to discuss and go over the details to run the concert, along with Gretchen Beck, associate dean and director of student leadership and involvement and Brittany Martin, associate director of student leadership and involvement.

“[We were] basically going over what the artists have in their contracts, what do the artists need in terms of hospitalities, what are the extra things, what of the [issues] that come along with hiring this artist, do they have a difficult personality, are they going to be able to work with other artists that we’re hiring,” Hurst said. “There’s a lot of different variables that come into why it took so long this year to get the contracts set up.”

The meetings between ASG and GAP discussed plans on how to manage the concert but also the ways to go about the concert.

“It was a lot of brainstorming ideas, who to probably get, what kind of things we should be doing on concert day and how best to go about that stuff,” MacStudy said.

For this year, ASG handled the volunteer portion for the concert while GAP handled the artist management. GAP was also in charge of the advertising for the event, which included posters and the creation of the Facebook event.

Hurst was co-volunteer coordinator with MacStudy and handled sign-up. Volunteers received a free ticket and T-shirt if they worked the concert, which consisted of loading equipment, set up for the artists and ticket scanning.

Regardless of the long hours required to put on a successful show, the concert had multiple volunteers.

“We had about 15 people help in the morning and we had about 55 total throughout the day,” MacStudy said.

Overall, and despite the setbacks, ASG and GAP were able to collaborate and successfully put on the concert, according to Hurst.

“[ASG and GAP] have a very good, friendly relationship that centers on the happiness of the student body,” Hurst said.